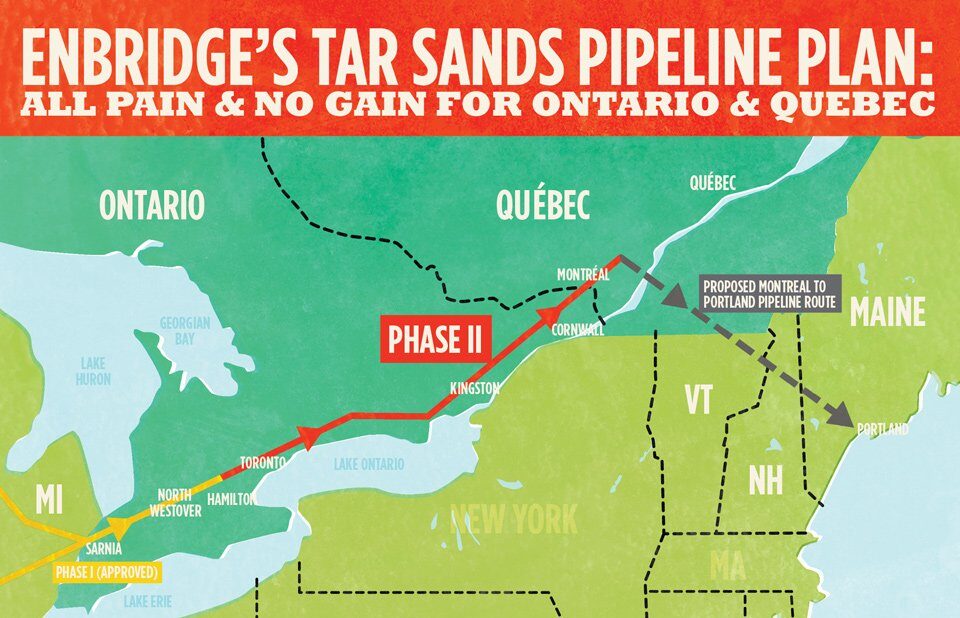 Volatile tar sands crude will be flowing through Enbridge's pipeline in north Toronto within a year.

In giving Enbridge the go-ahead to reverse the flow of crude along its Line 9 Thursday, the National Energy Board (NEB) attached more than three dozen conditions presumably aimed at allaying the concerns of environmentalists and a host of municipalities, including Toronto, which raised liability issues related to water protection.

But environmentalists, affected First Nations and residents living along the route, which stretches from Sarnia to Montreal (and across the Finch corridor in Toronto), say the mix of stipulations bypasses their main concerns – namely, safety issues related to the pipeline’s carrying of heavy tar sands crude.

The NEB’s decision gives Enbridge the go-ahead to reverse the flow and pump 300,000 barrels a day through the existing 38-year-old line now slated to transport bitumen, which is much heavier and more volatile than ordinary crude, from Alberta and North Dakota eastwards to refineries in Quebec. Environmentalists argued at hearings last year that the more abrasive crude raises risks of ruptures and leaks along the line.

But the NEB’s approval was never in doubt. The uncertainty of other pipeline projects aimed at getting Alberta crude out of the landlocked tar sands to world markets, namely Keystone in the U.S. and Northern Gateway out west, left Line 9 as the only option in the short term.

Environmental Defence’s climate program manager Adam Scott says the conditions imposed on Enbridge are merely procedural and do little more than “create a paper trail that consists largely of check-boxes where all Enbridge has to do is self-police. It very clearly shows that the regulatory system in Canada is completely broken,” he says.

Those conditions outlined in a 158-page decision document include the filing of reports by the company with the NEB detailing procedures before work can begin on specific components and sections of the pipeline.

Enbridge must also submit a watercourse crossing management plan, which will outline risks and planned actions in the event of a spill.

But Scott argues that almost all NEB decisions look like this.

“There’s nothing of substance. It’s pretty basic stuff that’s already required in legislation that already exists, like how you’re going to mitigate the damage you’re going to do to water crossings when you dig up a pipeline.”

“That would be the only real way to determine if this pipeline is safe,” says Scott. The NEB, however, is allowing Enbridge to use data from older tests.

Enbridge argued it has inspection technology to detect cracks, but Scott said numerous pipeline failures in recent years, including 35 leaks on Line 9 alone and a 2010 spill into the Kalamazoo River in Michigan, prove the technology is not up to the job.

“It could lead to something if there’s data the NEB thinks is problematic,” Scott said. “But they very explicitly stated that a hydrostatic test is not required.”

Same with intervenor requests for an independent, third-party review of Enbridge’s engineering assessments. Data requested is largely from earlier reporting.

“Enbridge got its way on everything,” Scott said, adding that the 18-month consultation process and expert evidence submitted amounted to little more than more paperwork for Enbridge.

“There’s been no modelling studies to predict a flow in the event of a rupture,” Eriksen says.

Carrie Lester of Idle No More calls the decision disheartening and anticipates a ramping up of protest activities.

“All the different groups are going to be working to keep it in the news,” Lester said. “There will be as many events as we can put together.”

In response to the decision, Rising Tide Toronto is calling for “civil disobedience to protect communities, land, and water from tar sands and fracked oil in the pipeline.”

In a conference call with reporters, NEB spokesperson Carole Léger-Kubeczek confirmed the decision is final and does not require further governmental approval. The only options left to opponents is an appeal in federal court.

Kubeczek added, Enbridge has one year to complete the reversal and seek the board’s permission to open the line for operation. Actvists, meanwhile, have planned a noon hour rally at Queen’s Park. A press conference including singer songwriter Sarah Harmer has also been scheduled for 12:30 in the media room at Queen’s Park.