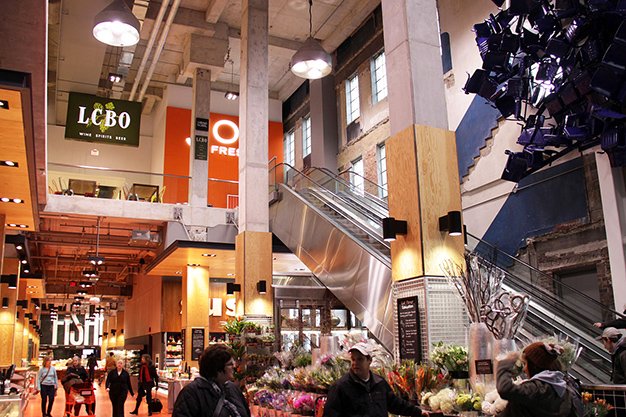 Loblaws’s sprawling Maple Leaf Gardens store is located the foot of the Church-Wellesley Village, and the grocery giant has made much of the store’s proximity to Toronto’s gay district. Every Pride, massive rainbow wraps coat the store’s prominent windows. At this year’s festival, Loblaws even went so far as to hold a series of drop-in dinners at the store meant to “facilitate a positive conversation about the LGBTQ community”.

When Pride-goers queued up at the store’s bathroom on Sunday, however, it was a different story. Multiple visitors say they watched a security guard posted at the store’s washrooms redirecting patrons into the “male” and “female” lines. When visitors expressed their concern, they added, a store manager responded with flippant comments.

Anthony Oliveira was waiting near the upper-floor washrooms when he saw a guard “not just asking (people for their gender), but identifying and blocking” them from being in the lines they chose.

“Some people present or pass one way or another or not, but there were people who were clearly much more fluid about their gender,” he said.

Oliveira said the guard didn’t seem to be acting maliciously, but was “clearly in way over his head. It wasn’t that they were being homophobic, but I can imagine there were people who were deeply upset.” Other guests attempted to take photos of the guard, who shielded himself from the cameras.

Not long afterward, Oliveira says, he saw two Toronto police officers come up the escalator and enter a washroom, remaining inside for about five minutes. “Apparently the security guard was having trouble,” he said. “They came up and were muttering to each other about how fucking silly it was. It was clearly a visit on behalf of the store – not the (guests).”

Oliveira went downstairs to find a manager, where he said several other people were also waiting for their turn to complain. The manager’s response, according to Oliveira: “Sorry you were offended – those were the rules”. “They were so dismissive. It was a really hostile vibe.”

The manager then added there was a “trans bathroom” on the first floor, Oliveira said. “How would anyone know that – and do you have to identify yourself as trans to use that bathroom? They clearly had no one on staff who had thought about helping the community they were supposed to be serving.”

Loblaws did not respond to an email request for comment from NOW, but sent the following message via Twitter to several users:

“We regret if anyone was offended by the presence of the temporary security guard, who was posted following a fight to ensure the safety of all customers. Our store has long been a supporter of the spirit and events of PrideTO.”

“I think if Loblaws could have acknowledged the issue more directly – preferably at the time it was happening and not a day later – that would have been nice,” Naylor said.

Both he and Oliveira allow that as cisgender men, they had no issue using the washrooms personally, but the guard’s behaviour could have been highly disruptive to non-cis visitors to the store.

“More than anything, I would have wanted Loblaws to realize how foolish and cruel it is to gender-police their washrooms, especially during Pride, when the whole neighbourhood is full of people who may have to deal with the fear of being yelled at, confronted with violence, and/or kicked out the washroom they feel most comfortable in,” Naylor said.