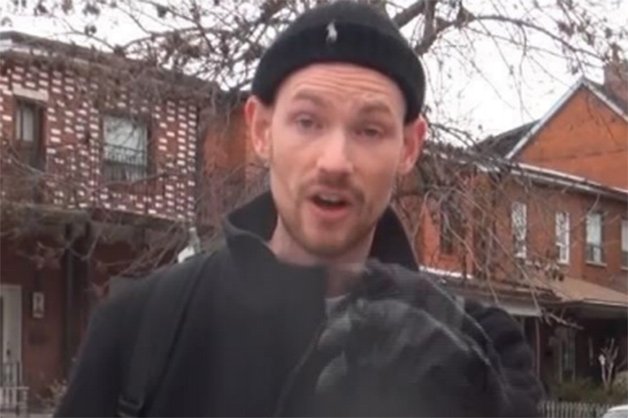 Police have confirmed that prominent barista Sam James has been charged with one count of assault and two counts of mischief stemming from an incident on March 18 in which he confronted anti-abortion protestors outside of Harbord Collegiate Institute, near his eponymous café.

Also charged with one count of mischief was Emma Davey.

Police released photos of the pair on Tuesday afternoon, seeking the public’s help with the investigation [pdf]. According to Detective Darren Worth, James turned himself in to 14 Division on Wednesday, and Davey turned herself in on Thursday evening.

As outlined in the Toronto Police Services’ Tuesday news release, the events allegedly unfolded as follows:

Harbord Collegiate is situated at the northeast corner of Harbord and Manning the Sam James Coffee Bar is on the south side of Harbord, slightly west of Manning. (James has two additional locations, at Bloor and Clinton and in the PATH system.)

Evangelical news outlet LifeSiteNews spoke to Stephanie Gray, executive director of the Canadian Centre for Bio-Ethical Reform, under whose auspices the protest took place. From their report:

Gray related how footage of the event captures the man going face to face with each pro-life demonstrator shouting “f–k you”.

Gray also related how friends of the man drove up to the team in a white van, forcibly seized the pro-life signs, and proceeded to load them into the van.

It was only when the would-be thieves realized that they were being filmed that they threw the signs out of the van and drove away, not before stomping on the signs and destroying five of them. A team member captured the van’s license plate on film.

We reached James on his cell phone Tuesday night, but he hung up when this reporter identified himself. Friday afternoon, we got his voicemail.

But just before noon on the date in question, James tweeted:

James is a “suggested nominee” for Best Barista in NOW’s annual Best of Toronto readers poll.