Original underlines the necessary function of influence with quotes from Jim Jarmusch, Maria Popova and more 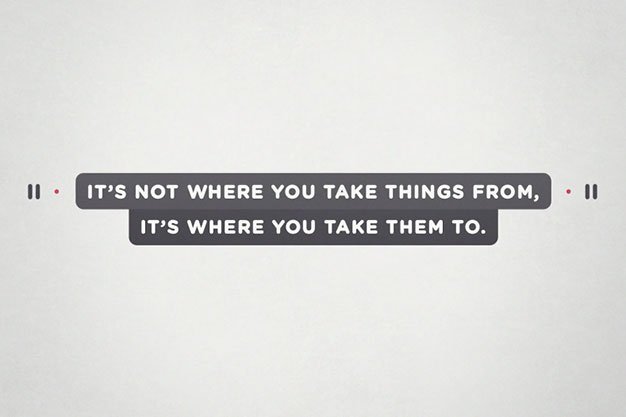 Original. It’s simultaneously the plainest flavor of chip in existence and the distinction that every artist seeks. Quite simply, can you prevent yourself from repeating what you’ve seen? Are new ideas the reaction or result of the overstimulation we encounter daily? Have all these words been used before as well?

Musings on these questions permeate Original, the latest short animation video from Toronto graphic artist and art director Andrew Vucko. Slickly animated and scored, the two-minute sequence contemplates the nature and necessity of inspiration by combining a narrative of quotes from renowned creators like Pablo Picasso, Jim Jarmusch, Woodrow Wilson and Jean-Luc Godard with a thoughtful journey through artistic expression. This sentiment of thinking outside the box is nothing new, but rarely is the box itself rendered so creatively.

Original / Short from Vucko on Vimeo.

We asked Andrew about his work and what sparked his inspirational rallying call.

What’s your background in animation?

I have been freelance for the past six years. I went to school for film production and shortly after for VFX, but I actually have had little formal training in design or animation. Everything I have picked up has been self-initiated and refined working at various studios. In the past year I started building an independent collective of artists, being able to manage and handle larger scale projects.

Were you facing a creative block in your work when you decided to reflect on this? If so did it help you overcome it?

Definitely. I have always been passionate about pushing forward with my own personal projects – but the main issue was always, “is this idea worth investing time in?” I was waiting for that one original idea to come through that hadn’t been tapped into but it just never came. But going through the process, failing to start projects many times, it dawned on me that I should just tackle the issue in front of me, in a meta sort of way.

Was it a challenge to make something about originality without it resembling anything else? How did you approach such a tricky topic?

I embraced the fact that I would be taking elements from existing pieces. I think it’s good to begin your process aiming toward a specific tone or aesthetic. If you really immerse yourself in what you are doing, a personality will find its way into any avenue you choose, and that will eventually shine through and change the final product for the better.

I felt the topic was touched on many times by so many talented people, but there was still a way to unify all these ideas into one cohesive piece. That’s when the concept dawned on me – to adapt all these separate quotes from creatives over the past decades. From there the process was very fluid and inspired, ideas pieced together and began creating a natural harmony.

What was the timeline for creating this? From idea to finished product? How long does it take to construct animation like this from scratch?

The timeline for this was very spread out, I had squeezed it between a number of larger scale projects over the year. The overall time spent on this I would predict to be somewhere in the range of two to three months in total. John Black of Cyperaudio had pushed the other half on sound design and composing, overall that took about an additional month.

What else inspires you in graphics at the moment?

A heavy source of reference has lately been product and furniture design. Lots of older work from Braun, Knoll, etc. I try to pull inspiration from things outside of the field of graphic design. It’s easy to get lost in that world and hard keep your mind clear, there is almost an abundance of inspiration available and I find that can work against you.