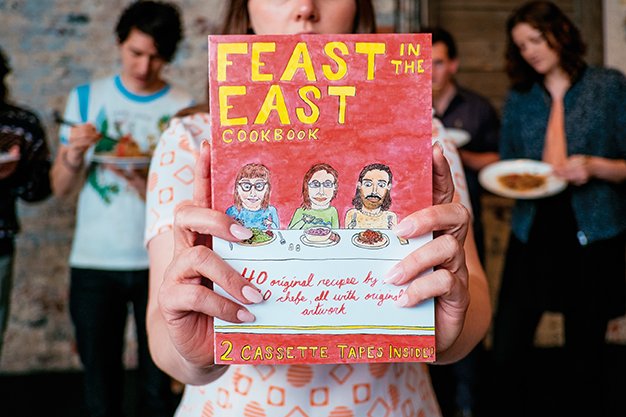 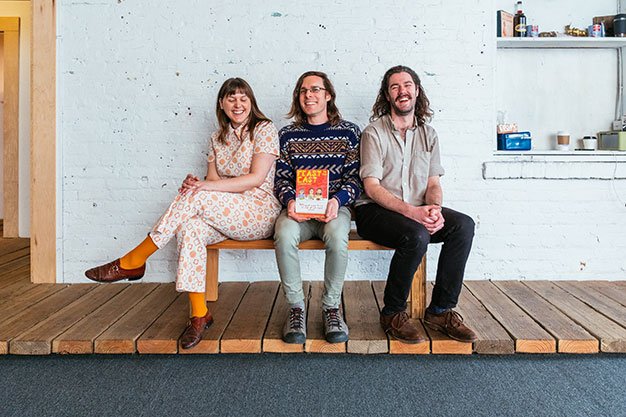 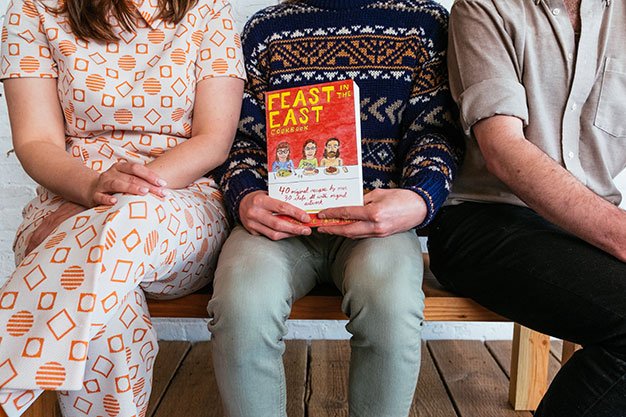 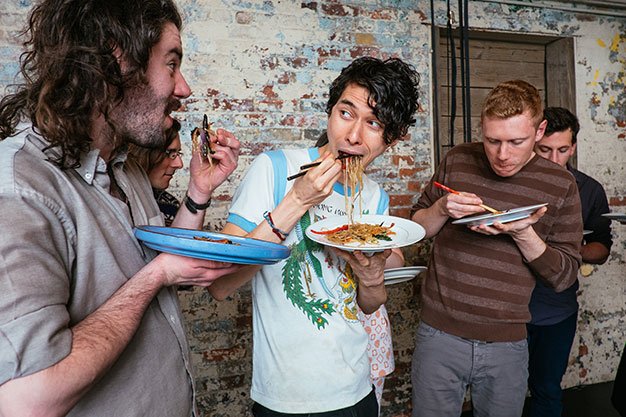 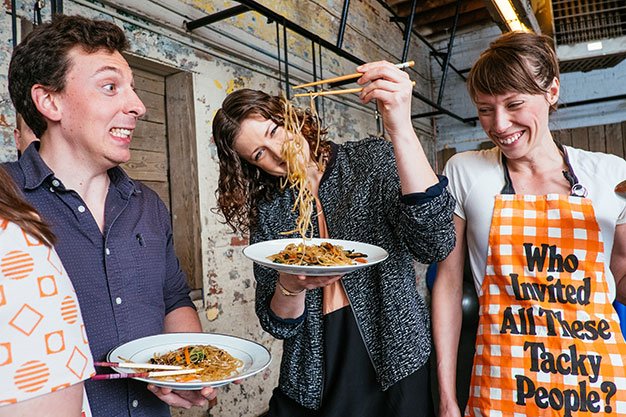 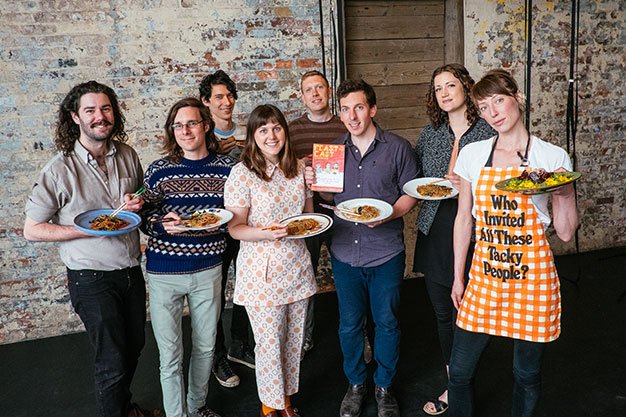 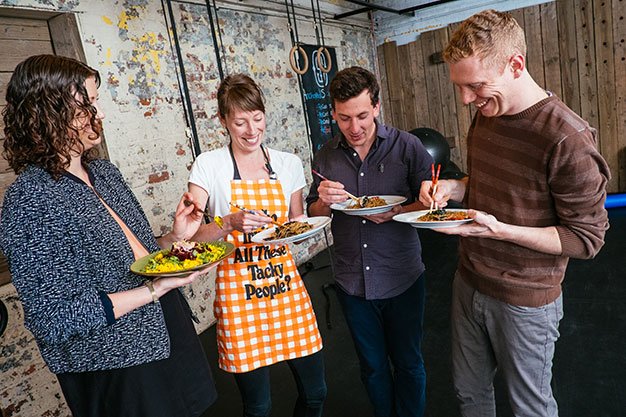 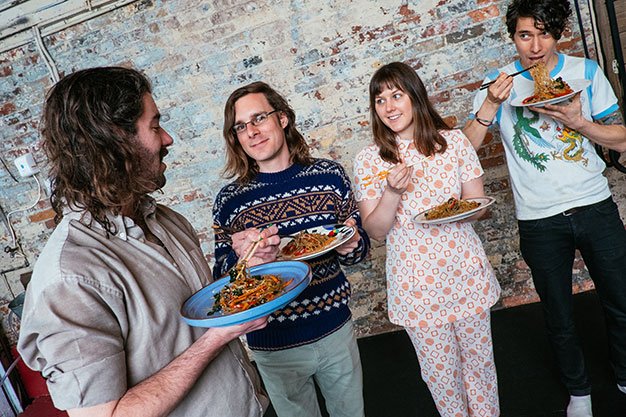 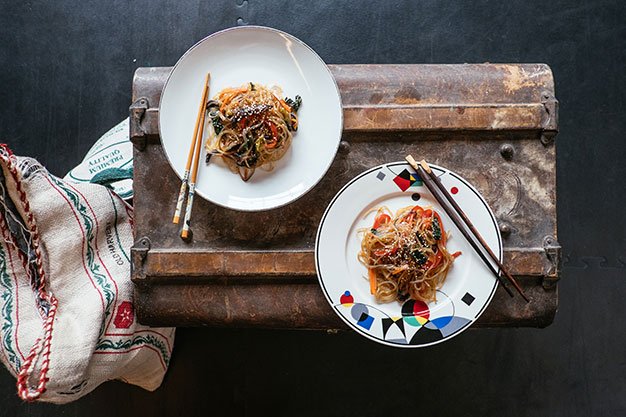 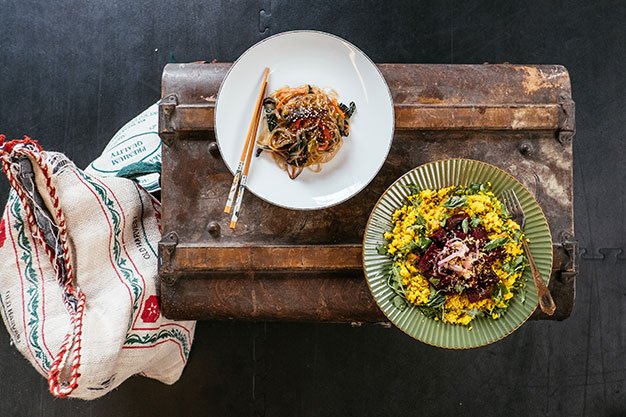 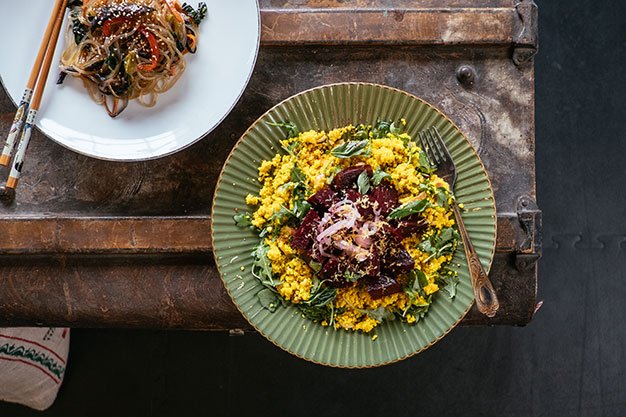 Monthly music, art and food series Feast In The East celebrates turning five with two anniversary events at Anchored Social Club on May 6 and 7.

In addition to projections, art installations, a cookbook/cassette launch and a dinner by Brandon Lim, Friday’s programming includes performances by New Fries, Horse Lords, Mimico, Carl Didur and JFM, and Saturday has Matrox, Blonde Elvis, Germaphobes and Castle If. Co-founder Tad Michalak talked to us about all things Feast In The East.

What prompted the idea?

Neil Rankin, Cameron Lee and I felt there was a lack of DIY-style shows, pop-up dinners and art openings in the east end. We wanted to create something for the people who were always travelling west to get their cultural fix, and also to encourage people to come east and -explore. Feast In The East now consists of Katie Jensen, me and Neil Rankin (pictured in inset photo).

The east end has gentrified a lot. The loft spaces we started this series in on Carlaw have been renovated into condos, so space where you can present this sort of thing is harder to find. The flip side is people are getting more used to the idea of coming out here, and more people live out here as high rents push people further out from the core.

Why was the east-end location important to you?

The cultural centre of the city has been moving west for the past decade, so it’s important to balance that out. The east often gets a bad rap, but there’s a lot of great stuff and people out here, so we want to expose people to that and break down the stigma.

[One standout event over the last five years] was our second anniversary. We lost our venue a day before the show and ended up finding a shut-down cafe space at 4 pm the day of. It was full of garbage we had to clear out. The show was super-packed and crazy. The cops showed up twice, but were actually really nice. Everything sort of worked out even though it was teetering on the edge pretty much the whole time. I think that created a really electric energy.

Tell me about the cookbook and cassette compilations you’re launching.

The cookbook includes more than 40 recipes by chefs who have cooked for us over the years, with original images opposite the recipes. They include mainstays like Dad’s Magic Granola Thai-o Cruz Noodle -Salad Kale, White Bean & Bacon Soup Dark Green Torta and Southwest-Style Baked Potatoes. There are two cassette tapes in the back of each book featuring 40-plus tracks by bands that have played at Feast, from noise-punk Soupcans to contemporary classical ensemble Music in the Barns to a Tenderness devotional dance banger and everything in between.

Biggest challenge of throwing a music/food series in Toronto?

As with anything, staying fresh and relevant is a constant challenge month in, month out. Finding appropriate spaces that serve all the needs of a series like this – kitchen/food prep space, blank wall space, capacity for loud volume – is becoming increasingly difficult.