Long Winter at the Great Hall

Fucked Up sneak premiere of their new album, Glass Boys 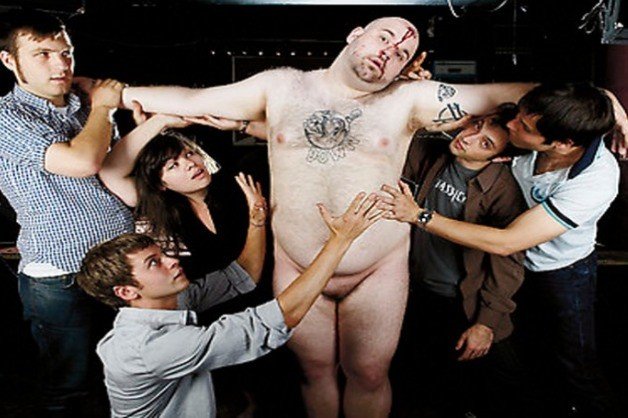 For this season’s final Long Winter event, co-organizers Fucked Up gave their fans a special gift: a sneak peek at their entire upcoming album, Glass Boys. It’s now abundantly clear that Fucked Up do not give a fuck if you think they’re punk rock enough (which is fairly punk in itself). The new songs feature an even wider array of unexpected influences than before, at times pushing their unique take on hardcore closer to the prog rock of Rush, and other moments the chiming power pop of Big Star. There was even a section that sounded more like a swinging psychedelic jam band. Great new tunes, although the fans were clearly very relieved that the encore contained some old shout-along favourites.

Cancer Bats’ earlier set was heavier and more hard rock in comparison: big riffs and ripping guitar solos. Earlier in the night, JFM caught our ears with lo-fi experimental house in the restaurant area, and John Caffery’s end-of-the-night DJ set of big gay dance tunes was the perfect antidote to the throat-shredding screaming in the main room upstairs.

An event like Long Winter is about much more than the music though. The art installations, wholesome snacks, talk show, films, theatrical performances, comedy, games and karaoke are just as much part of the unique experience, not to mention the sleepover that a small handful of attendees participated in (we watched Ghostbusters, played games and enjoyed a breakfast performance by Fiver). Too bad that capacity restrictions at the Great Hall made for puzzlingly half-empty rooms and long lines to get into them.