Look at these f-ing bigots (or don’t)

What is the right amount of attention to pay to the Islamophobes protesting Olivia Chow? 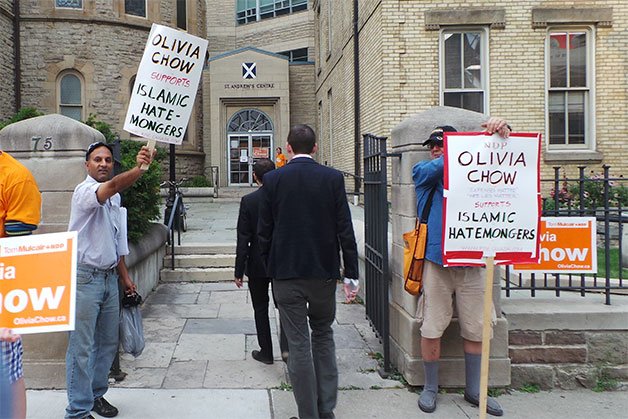 Rise Canada picketers at the entrance to the NDP's Spadina-Fort York nomination meeting on Thursday. You can't make it out here, but under Chow's name, the sign on the right says "Expenses Matter. White Lies Matter." 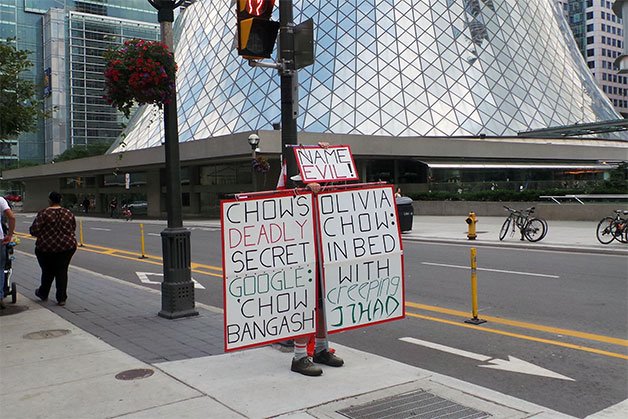 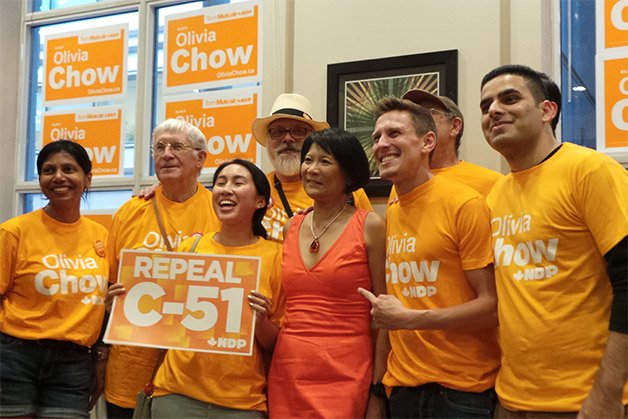 The bigots were kind enough to give me a heads up. On Wednesday evening, “Rise Canada” tweeted at me and several others in the media that they’d be picketing Olivia Chow’s nomination meeting the following night, in protest of — among other things — her support for TDSB trustee Ausma Malik, “a hijab wearing Muslim” (gasp!).

And so when I encountered the trio of sign-wielding xenophobes outside St. Andrew’s Church at King and Simcoe, my reaction was less one of surprise than of weariness.

“I love your hair,” the man in the blue shirt scoffed at a group of women wearing headscarves, who just happened to be walking past on the street. He muttered to his companion: “That’s really shit.”

There’s an inherent tension in coming across folks like these in the course of reporting: Do you cover them in the hope of exposing their bullshit? Or do you wave them off, content that they’re already sufficiently marginalized?

I took the latter approach with the Trinity-Spadina trustee race last fall, when the same people were among the Islamophobes leading attacks on then-candidate Malik. But as I later wrote, my decision turned out to be a poor one, as the campaign against her flourished in the shadows, acquiring enough momentum and resources to become genuinely alarming. When media finally covered the bullshit directed at her, the community rallied around. She likely would have won the race, anyway, given her organization and connections, but the additional support surely contributed to her impressive margin of victory.

At a panel discussion in January, Chow expressed regret that there hadn’t been a similar response when the Sun published a racist cartoon of her in the final days of her mayoral run it was the mainstream emergence of the pernicious xenophobia that had dogged her throughout the campaign, and which her opponents had neglected to condemn.

Still, that doesn’t mean giving jerks attention is always the better response, though that’s clearly what I’m doing here. (There are still two months left to take a deep dive into the substantive issues of the Olivia Chow–Adam Vaughan showdown in Spadina-Fort York, and I look forward to doing so.) It may no longer be news that Ford Fest fixture Ron Banerjee — the apparent organizer of the picket, at left in the photo above — is a terrible person, but when there aren’t constant reminders, he sometimes gets mistaken for a serious voice by people that should know better.

After the meeting — at which Chow’s acclamation as the NDP’s candidate was followed by a speech from famed-lawyer-for-the-wrongfully-convicted James Lockyer, who ripped Liberal MP Vaughan for supporting the Conservatives’ Bill C-51 — I asked Chow whether she thinks the better approach to marginal bigots is to wave them off or call them out. Her answer, veering between both sides of the argument, mirrored my own conflicted ambivalence.

“Well, in my Canada, there’s no room for racists, sexists, or homophobes,” she said.

But on the other hand, “They are so full of hate. There are so few of them. You know, I have a task to do tonight. We’re talking about serious [issues], C-51 and all that. And those hateful messages, I don’t want to give them oxygen.”

Then again: “But I think the public needs to know that kind of hateful messages need to be brought out, and we need to condemn it. Very clearly.”

It’s not an easy question, and I didn’t expect an easy reply.

Malik, however, has given the problem more thought than most, and chose to allude to the bigots during her short speech at the meeting.

“Last October, I saw first-hand what happened in this community, when hate and prejudice showed its ugly face,” she said. “I saw people come together to take it on. So many of you in this room. And I heard more than once as I knocked on doors, ‘This is not what our community stands for. This is not what Toronto stands for.'”

The protesters were gone by the time the meeting was done.

Correction (8/17/15, 3:55 pm): A photo caption originally described a sign as containing the words “White Lives Matter.” Upon closer inspection, it appears to actually say “White Lies Matter,” a rather tamer play on the same phrase, and one that arguably makes less sense in the context.