In a downtown riding that symbolizes the NDP-Liberal divide, Adam Vaughan and Olivia Chow are like fighting parents forcing us to choose sides 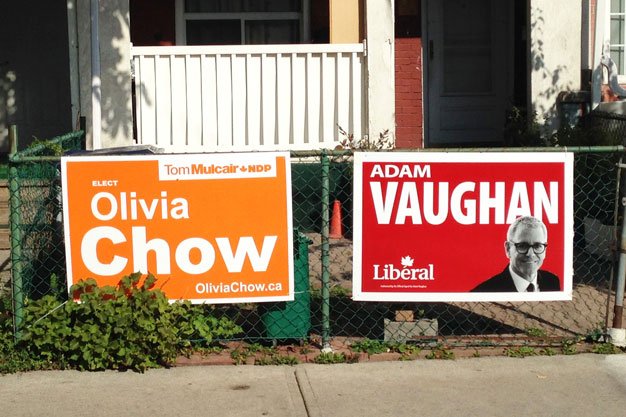 Adam Vaughan at the first Spadina-Fort York debate, hosted by the Residences of the World Trade Centre HomeOwners Association on September 14.

Adam Vaughan can be an asshole.

That’s his talent and his shtick, his appeal and his weakness. But whether at City Hall, on Parliament Hill or in a possible future Liberal government, he’s sure to be your asshole – an asshole on the inside, agitating for housing and transit and the needs of vulnerable populations.

Which is very good up to a point, that point being when you find yourself on the wrong side of him.

Immediately following the taping of Rogers TV’s Spadina-Fort York all-candidates debate on October 6, Vaughan asks me what I thought. I give him my honest first impression: that he interrupted his chief opponent, the NDP’s Olivia Chow, a whole heck of a lot and frequently tried to talk over her.

I clumsily turn this into a question about his debating approach, figuring it a comparatively gentle way to ease into an interview in which I mostly hope to press my area’s incumbent on his controversial support for the Conservatives’ Bill C-51. (I should add that my partner works for the Ontario NDP and that the Unifor rep who handles NOW’s bargaining unit – of which I am the chair – is on leave to run Chow’s communications.)

“Lookit,” he says, “if you want to talk about the substance of the debate, we can.”

He says that style matters far less than substance. And he is correct.

But in a race this close, it’s also not nothing. 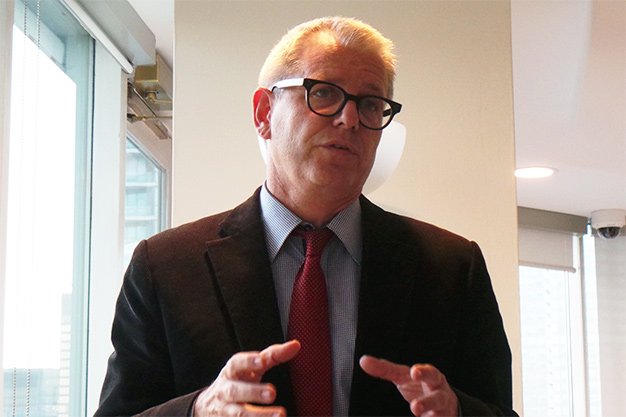 Almost perplexingly so, given that her party has steadily declined in the polls, and – to whatever extent national numbers can be accurately extrapolated to predict individual riding results – her likelihood of victory has probably diminished in parallel.

“I’m having a grand time,” she says on a cool recent Wednesday evening. “I love canvassing.”

We’re sitting on a bench in David Crombie Park, opposite the Windmill Line Co-op, where she, Vaughan and Green candidate Sharon Danley have just taken part in a forum on housing. Chow points to a small glass structure in front of us enclosing the entrance to a pedestrian tunnel that connects the park to the public school and community centre on the other side of the road. She bemoans that the ridiculous thing was built by either the city or the school board – she can’t remember which – over the protests of local residents who correctly opposed it as an unnecessary alternative to just walking across the quiet, two-lane street.

Some things don’t need to be complicated.

Chow used to represent this area as a school trustee and on the Metro and post-amalgamation councils, when the ward called Downtown stretched across the core. The 2000 municipal redistricting shuffled her a bit west to Trinity-Spadina, whose federal counterpart she left council to represent in 2006 that fall, Citytv reporter Vaughan succeeded her at City Hall. She stepped down as MP in early 2014 to run for mayor of Toronto, triggering the by-election that sent Vaughan to Ottawa. Having finished third in the mayoral race, Chow is now looking to return to the House of Commons in the new district of Spadina-Fort York, which consists of the south half of the old Trinity-Spadina as well as the chunk of the St. Lawrence area below the Esplanade, where we sit now.

“A lot of the folks here in this neighbourhood have worked with me,” she says. “So they know my track record. So it’s just a question of trust. So they’re voting for me.”

It’s not the most compelling pitch, but it’s not nothing. 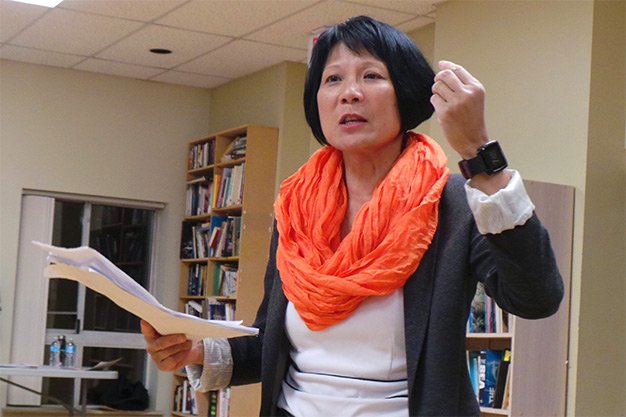 Spadina-Fort York is not a perfect microcosm of the dilemma faced by progressive voters this election – the Conservative candidate, Sabrina Zuniga, has no shot at winning – but it does embody most of the tensions. Some are eternal struggles, like idealism versus pragmatism and policy versus politics. But others are even more difficult and involve weighing different approaches to the same issue and similar approaches to different issues.

At the October 7 Co-operative Housing Federation event at Windmill Line, a man prefaces his question to Vaughan: “I love what you’re saying, and I don’t think I’ve ever met a stronger advocate for housing policy and housing action.” I figure he’s a supporter, if not an outright plant.

But 40 minutes later, the same guy says to Chow, “As I understand it, the NDP is the only party which questions military spending and may be strong enough to stand up to create cuts in military spending so that the rest of us can have a little access to some money [for other priorities].”

I have no idea how he’s voting, and quite possibly neither does he. Building affordable housing is probably more urgent than cutting the military. But would doing the latter speed up the former? Does the NDP even want to pull back on armed forces spending? Sort of? You find yourself travelling in concentric circles around platform planks you feel ill equipped to objectively evaluate.

At best, the nuanced discrepancies between the platforms on offer speak to a better world where these are the discussions that we always have. When Vaughan and Chow argue about whether it’s more desirable to allocate a set amount of money for housing or to guarantee a certain number of new units, I’m just happy that we’re fighting about who can build more of it.

At worst, however, it speaks to an intractable war of small differences between twin factions who both agree that government has a crucial role to play in making the country a more just place. When Chow and Vaughan accuse each other of only wanting to engage in ribbon-cutting exercises for new transit projects rather than spread the money wisely, I want them to recognize that the Liberals’ plan for consistent, predictable funding and the NDP’s plan for per-capita-based funding each has its own respective merits. And may not even be mutually exclusive.

There are times it feels like it’s your parents going at each other – sometimes sharply, sometimes passive aggressively – with your sympathies shifting moment to moment. But when they eventually head in separate directions, you have to decide which to follow.

“In 37 days,” Chow proclaimed at a September 12 rally against Bill C-51, “we will say no to the unprincipled politicians like Justin Trudeau and Adam Vaughan!” She was borrowing an adjective from former Supreme Court justice Louise Arbour, who’d criticized the Liberals’ support for the new security-and-surveillance law.

The context seemed to get lost when I tweeted the line, with a remarkable number of people expressing varying degrees of (pseudo?) shock that she would describe her opponents this way. “Olivia, this is unworthy of you,” tweeted Bob Rae.

Things calmed down a bit after that. On September 14, Chow skipped the campaign’s first debate – an intimate affair attended by two dozen people in a Queen’s Quay condo party room – and neither Vaughan nor the other candidates bothered to mention her.

The next night, in front of a larger crowd at the Radisson near Harbourfront, Chow and Vaughan took pains to play nice for the York Quay Neighbourhood Association. Their exchanges were disarmingly pleasant and highlighted their points of agreement.

But when I catch up to them again at the Rogers debate three weeks later, their parties have diverged in the national polls and appear unshackled from niceties.

“Canadians don’t want government to listen to their cellphones or peer into their internet search history, and we have a right to privacy, and this C-51 is dangerous, is reckless, is ineffective, as Amnesty International called it, and will make us even more at risk,” Chow declares. “And it’s very disappointing that the Liberals voted together with the Conservatives and didn’t take a principled stand against it.”

Vaughan affirms that, on balance, voting for C-51 was the right decision, even if parts of it need to be changed, as his party has pledged to do if elected. He calls the expansion of preventive detention powers necessary and dismisses the NDP’s concerns as fear-mongering on par with the Conservatives’.

“If it’s compared to the War Measures Act, absolutely,” he says. “I think that we are all aware and all concerned about potential and theoretical possibilities that concern us, and there are changes that need to be made to that bill that we continue to fight for.”

Before I can ask if that means a law that’s open to abuse is acceptable right up until an occasion when it’s actually abused, he’s already on to denouncing the NDP for opposing the Liberals’ amendments in committee.

But surely some things cross a moral line and are worth saying no to? If there weren’t funding for housing in his party’s platform, Vaughan offers, “I’d have said no to being a candidate.”

For Chow, it’s the Harper government’s campaign of fear that crosses a line. At the co-op forum, a man implores her to make the repeal of C-51 a priority if the NDP obtains at least the balance of power. She takes this as an opportunity to rail against the Harper government the way she railed against that guy at the mayoral debate who suggested she was a less-than-legitimate Canadian.

“What you have seen is a government really deliberately trying to divide us: divide us by race, by where we are born, skin colour, what kind of religion we have, what kind of things women wear. You know, that’s division!” she shouts.

“That’s using fear of the other. That’s not who we are. Who we are is a generous and loving country. This is our vision of a better Canada. So we will never allow Stephen Harper to divide us, to drive fear among us, because we know we are stronger together. So yes, of course we will repeal C-51.”

Some things don’t need to be complicated. This may or may not be one of them.