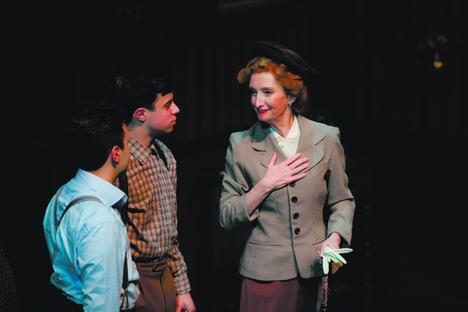 The day after opening night, tragedy struck the Harold Green Jewish Theatre’s production of Neil Simon’s Lost In Yonkers when cast member Linda Kash’s husband, the comic actor Paul O’Sullivan, was killed in a car accident on May 18.

Subsequent performances were cancelled before the company found a replacement for the key role of Bella, the child-woman whose struggle with her tough-as-nails mother, Grandma Kurnitz (Marion Ross), forms the heart of Simon’s funny and affecting play.

But the show goes on, and Jim Warren’s production makes a good argument for this being one of Simon’s better-written plays.

It’s 1942, and brothers Jay (Alessandro Costantini) and Arty (Jesse Shimko) have been dropped off at the home of their crusty Grandma and their Aunt Bella (Finnerty Steeves), while their sheepish father (David Eisner) hits the road to work off a debt he incurred to pay for his dead wife’s cancer treatment.

The two boys get little affection from the old lady, who rules the home and her convenience store below (where they both work) with an iron fist. Gradually, it becomes clear that her tough love approach to parenting has twisted all her children, who also include Louie (Ari Cohen), a quick-talking gangster, and Gert (Sheila McCarthy), a bird-like woman who can barely blurt out a sentence.

Ross, best known as the mom in the TV sitcom Happy Days, is unrecognizable as the steely matriarch her stiff posture is just right, although her German-Jewish accent wavers.

Steeves, who played Bella earlier this year off-Broadway, is heartbreaking as the developmentally challenged woman who wants to establish her independence.

The rest of the cast is fine, especially Cohen, but special mention should be made of the young Costantini and Shimko, who delineate the brothers – one serious and worrying, the other jokey and streetwise – with the skill of actors twice their age.