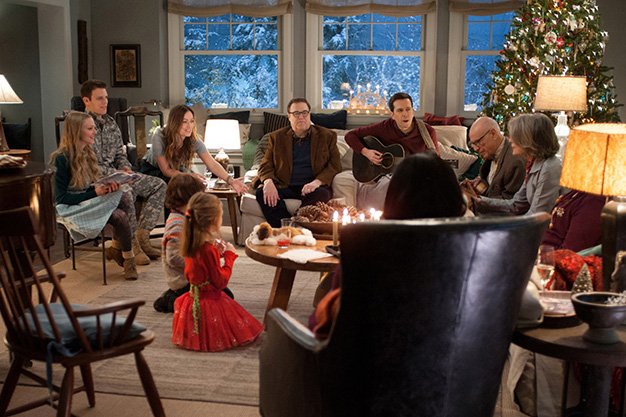 Love The Coopers offers ideal festive entertainment for anyone who felt Love Actually was too subtle and funny. A talented ensemble cast is wasted in this nauseatingly manipulative and sentimental bit of holiday swill that hasn’t a single saving grace.

Diane Keaton and John Goodman host their annual family dinner despite being on the eve of a divorce. Ed Helms goes job hunting on Christmas Eve to be able to buy presents for his kids. Olivia Wilde picks up a soon-to-deploy soldier (Jake Lacy) at the airport and convinces him to play her fiancé. Plus the likes of Alan Arkin, Amanda Seyfried, Marisa Tomei, and other overqualified players pop up with equally clichéd tragic lives that can only be solved through one magical family Christmas.

Director Jessie Nelson stages it all through the over-lit visual dullness that this big screen soap deserves. Jokes limp across the screen, tedious carols fill the soundtrack and syrupy sentiment lingers long past the point palatability. The movie is an endurance test for anyone who can’t stomach holiday cheer and a breaking point for those who can.

There’s not even mild pleasure to be had in watching the typically lovable actors, given the wretched material they’re stuck with and the awkwardly truncated editing choices that rob all competing subplots of momentum or closure. A movie destined for poorly planned Christmas gifting and proof that Scrooge might have been onto something before learning all those lessons.