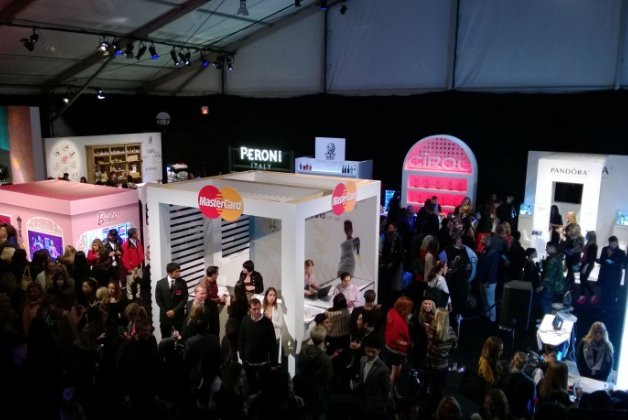 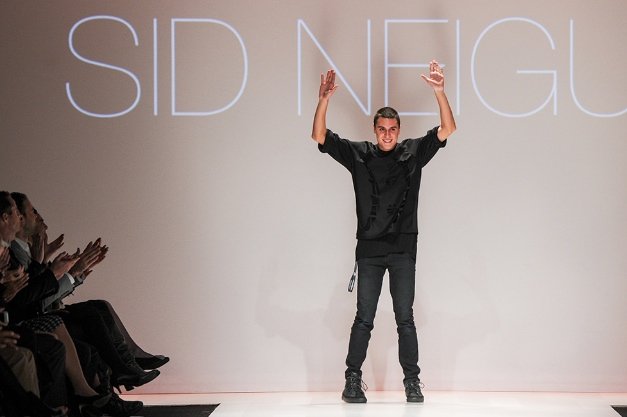 You know a designer’s a hit when he or she can pack a 5 pm time slot. Mikhael Kale kicked off Toronto Fashion Week with the sort of energy that’s been absent on night one for a few seasons.

As the lights dimmed, a thumping bass soundtrack signalled that the show was about to begin. Then, a black-and-white film of a woman’s naked torso – tits, nipples and all – gyrating and metamorphosizing into trippy shapes and reflections of itself screened. It wasn’t sexualized or voyeuristic it was a celebration of the female form.

The first few looks included studded black jackets, vests and skirts – all artfully constructed, but nothing new. We’ve been seeing metallic studs on black since last decade. In hindsight, I think Kale was trying to contextualize the pastels and iridescent water colours to come as “punk” and powerful, but he should have given his audience (and his clothes) a little more credit. These unnecessary pieces dumbed down the collection.

The core collection, minus those first few missteps, was one of the strongest I’ve seen in seasons. Intricate folds of organza in shades of turquoise and fuchsia popped off badass body-hugging dresses. Gone are the days when a woman has to wear black to be taken seriously – this is a new age of power-dressing.

The show notes claim Kale was inspired by “the art of folding napkins,” but I saw it as an extension of the opening video’s celebration of the female body. The elaborate organza folds looked like lovely labia – a beautiful tribute to all-too-often shamed female genitalia. Not at Kale’s show, where they were loud, they were colourful and they were proud.

Sunny Fong’s VAWK picked up the woman-power theme where Kale left off. His collection of black dresses and jackets – highly wearable and, more importantly, sellable – alternated between department-store-friendly pieces and, as the fashion industry says, “fiercer” ones that struck a perfect balance. Crop tops with long sheer trails and pentagramesque statement necklaces looked like The Craft 2.0.

Known for his diverse choice of models, Fong created a lineup that didn’t disappoint. The best piece in the entire show was an intricate made-in-Canada designer prosthetic accessory, all cool gunmetal and geometric shapes, worn by amputee ultramarathon runner Amy Winters.

Now, if only some audience members could quit clapping mid-show every time someone with a diverse look comes down the runway. I know they mean well, but it comes off as damn patronizing.

Fong also sent several other non-professional-model women (I’m loathe to call them “real,” because aren’t all women real?) down his runway. There was even a cellulite sighting! There should be more cellulite in runway shows, if you ask me.

It was almost impossible to pick out the non-models from the pro models, in part because Fong had them all trained by runway coach extraordinaire Stacey McKenzie. The point for Fong isn’t to have these women stand out so he can get a pat on the back it’s to seamlessly include them in his vision.

Beaufille, the label formerly known as Chloé Comme Parris, went back to its edgy, androgynous roots with a fall collection rooted in rust-red, long 70s-style dresses with crowded prints and slick black pieces sometimes reminiscent of garbage bags, but in the most high-fashion way possible.

Unfortunately, I was distracted by a duo in the front row across the runway: communications pro Jennifer Dawson and “upcoming actor” Marco, giggling and taking more selfies than they could’ve possibly known what to do with. “I want to throw my phone at them,” whispered someone next to me.

I went up to them after the show to see what they thought of the collection. Expecting the usual “oohs” and “aahs” and “I loooooooved it”s that everyone at Fashion Week says on record before turning their backs and slamming collections in private, I was shocked when Marco flat-out told me he “liked the clean lines, but it was boring. I didn’t like it. I actually stopped watching and started taking pictures.”

“Yeah, we were taking selfies,” chimed in Dawson.

“I’m being critical, but they have to get better,” added Marco.

There’s no excuse for being downright rude during a presentation that a local designer has tirelessly worked on, but I respect that the duo had the guts to openly dislike a collection, which doesn’t happen often in Toronto. In my books, that’s better than blindly fawning over everything in hopes of scoring free clothes.