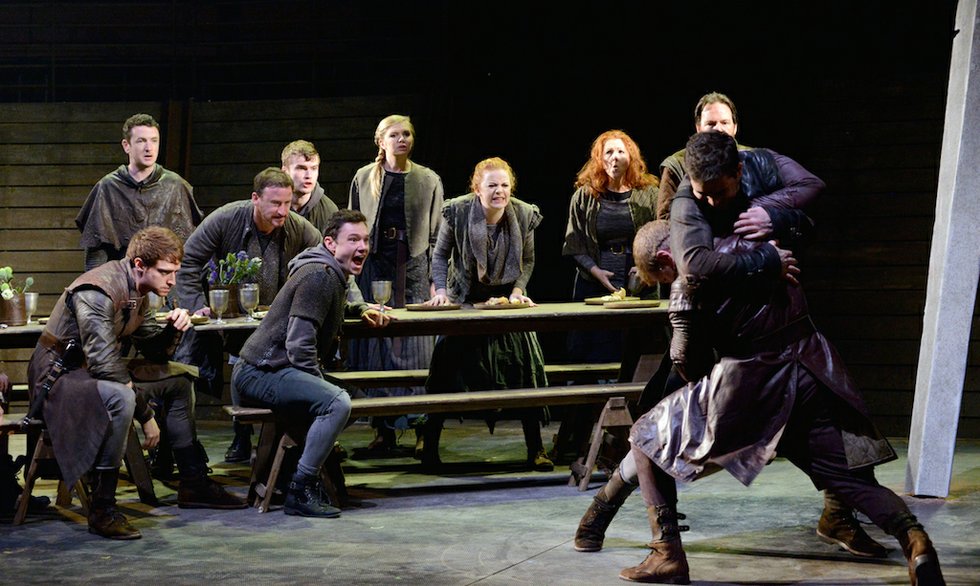 Uneasy lies the head that wears a crown. Shakespeare wrote those words about Henry IV, but they also apply a little further north to the first three Kings James of Scotland.

Certainly, Scottish playwright Rona Munro is attempting to channel the Bards history plays in her ambitious trilogy about her countrys lesser-known monarchs, spanning the years 1406 to 1488. Originally produced by the National Theatre of Scotland, the cycle was a hit at the Edinburgh Festival in 2014, and then at Londons National Theatre.

Receiving its North American premiere, the plays are the jewel of Luminatos stage offerings and a true theatre event, although their urgency and political relevance they were produced the year of Scotlands independence referendum is clearly lost over here.

Theres urgency enough in the storytelling, though, especially in the first play, in which James (Steven Miller), released after 18 years imprisonment in England, returns to his impoverished country to fight for the respect of his nobles, who appear like savages and will kneel to no king, let alone one of their own whos putting on airs.

His speech about the symbolic role of the monarch, delivered by Miller with modest firmness, is incredibly stirring, and director Laurie Sansom stages it brilliantly, making fine use of the vertical contrasts on John Bausors versatile set.

Other great scenes are to come: the coronation scene between James and his English-born bride, Joan (Rosemary Boyle), in which theyre getting to know each other, is lovely Joan was, literally, the girl of his fantasies, the figure he spied through his prison window for years and wrote poetry about.

And on the couples wedding night, their canopy bed is literally surrounded by curious onlookers.

The play has a natural arc about a man gaining the confidence needed to rule his country, and its thrilling, both in its clarity Munros dialogue is direct and vigorous and its staging.

James II is a different beast, but I like the way Munro and Sansom take a little detail from the first play someone mentions the many uses of storage chests and turn it into a metaphor for hiding.

The eight-year-old monarch, James (Andrew Rothney), is separated from his mother, haunted by nightmares and pulled in multiple directions by members of the court. Hed rather just slip away and stay in his chest.

His only friend is William (Andrew Still), the future Earl of Douglas, whose father, the ambitious Balvenie (Peter Forbes), has his own plans about where he wants his son to end up.

The tone is much darker than the earlier plays, and the jumps in time occasionally disorienting. But eventually the work finds its footing in the second act, when James, now married to a savvy French noblewoman (Boyle), begins speaking up for himself. A climactic soccer match between James and William carries symbolic weight as the former discovers who his supporters are.

James III establishes its modernity right off the top, with the characters, some wearing contemporary-looking clothing (by Bausor), singing and dancing to a version of Lady Gagas Born This Way.

This James (Matthew Pidgeon) is clearly a different monarch, less concerned about matters of state than his appetite: drinking the best wines, wearing the boldest fabrics and bedding the hottest women… and men.

Hes erratic, vain and capricious, demanding a choir follow him around and asking for tax money to fund a trip to Avignon. Before long, theres dissent in the court, and his Queen, the Danish-born Margaret (Malin Crepin), who does much of the bureaucratic work, is flirting with his head of privy council (Ali Craig). Meanwhile, the kings long-neglected son, Jamie (Daniel Cahill), is getting older and savvier.

Munro subverts our expectations in a clever scene in which James III appears chastened before his parliament and then changes his mind. And a war scene, like all the battles, is brilliantly staged before a touching finale that echoes moments from the previous two plays and looks ahead to Scotlands future.

If you can see only one play, I recommend James I. Its the best written and most involving. But seen in sequence, the plays take on heft and power. Munro, alluding sometimes subtly and sometimes boldly to Shakespeare, expertly interweaves images and motifs for maximum dramatic impact. And her roles for women are more numerous and complex than those found in Shakespeare.

Dont be afraid of the language. The dialogue, as in any period HBO series, is liberally salted with F bombs, and theres even some gratuitous nudity and lusty laughs.

Long may this series reign.

An earlier version of this review incorrectly identified the actor playing William Douglas in James II as Daniel Cahill. It was Andrew Still. We regret the error.