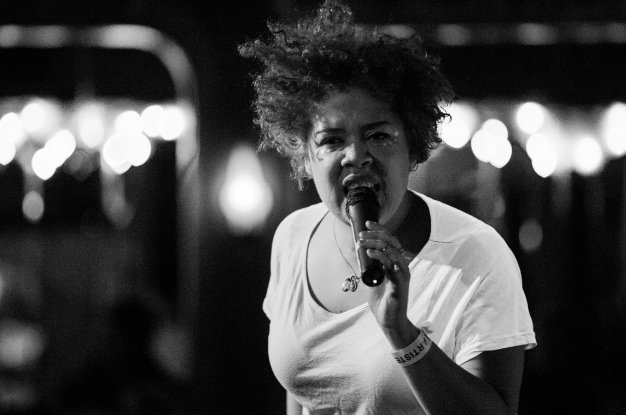 For the second night in a row, the acts at M for Montreal festival played 30-minute sets at across-the-street venues, meaning show-goers were skipping back and forth jaywalk-style between the two places all night. But unlike the previous evening in Mile End, Thursday’s action took place in the city’s downtown entertainment district on Saint-Laurent: Concerts bounced between Club Soda on the hour and Café Cléopâtre on the half-hour – more or less, anyway, both venues were a little behind schedule.

The rest of the bill would be jamming across the way at the much smaller Café Cléopâtre, which is actually a strip club.

As it turns out, however, strip clubs make great live music venues. As the stripping carried on downstairs, the converted upstairs stage proved perfect. Strip clubs are, of course, made for optimum sight-lines and the three-sided stage made for a great 270-degree experience of bands like Montreal rockers Heat and Toronto’s sludge-pop quartet Weaves.

Underneath the hanging disco ball and chains, Weaves front-woman Jasmyn Burke made full use of those three sides, calmly climbing speakers and bar stools, and looking audience members square in the eyes to deliver the band’s quick-pulsed, hooky tunes (many of which, I noticed this time around, recall the slick, digital, electro-rock vibe of St. Vincent’s latest album).

Another highlight? Montreal fuzzy garage-pop five-piece The Muscadettes, who incorporated surf rock and grunge for a mostly sunny sound – great for fans of Alvvays who are willing to trade pop-melody perfection for a little more edge.