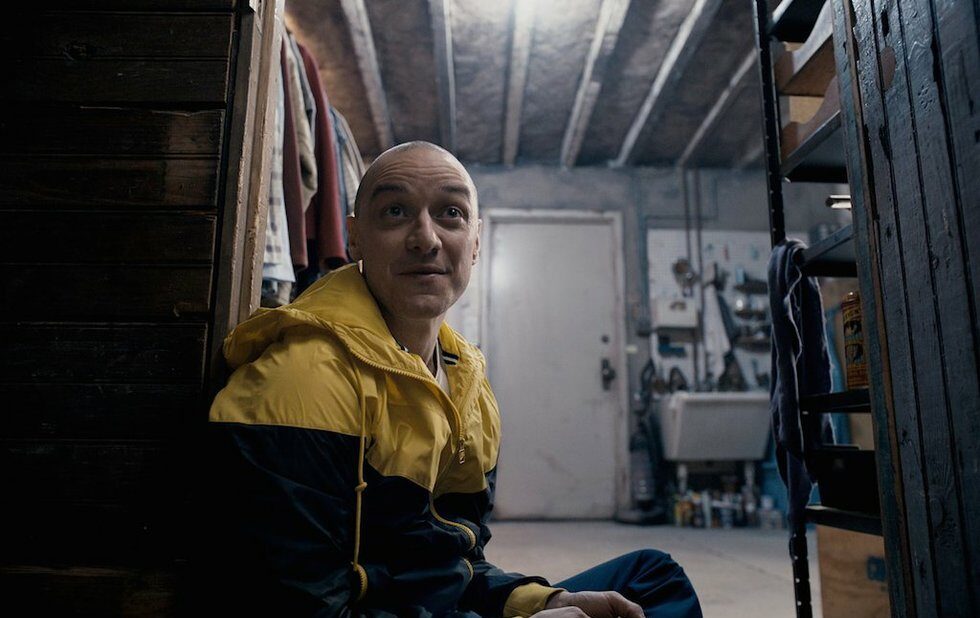 After the disastrous reception of The Happening sent him jobbing with The Last Airbender and After Earth, the writer/director/producer managed to get his groove back with The Visit. But that project, which found him dabbling with found-footage storytelling, still felt like someone else’s picture.

Split is clearly his thing, a return to self-serious genre storytelling that bears all the hallmarks of his defining early films.

Like The Sixth Sense, Unbreakable, Signs and The Village, it’s distinguished by its claustrophobic focus, deliberate pacing and absolute conviction that its central idea is ingeniously original rather than derivative of various pulpy thrillers. And for a while, that’s enough.

A minimalist thriller about the battle of wills between a young woman (The Witch’s Anya Taylor-Joy) held captive with two classmates (Haley Lu Richardson, Jessica Sula) by a resourceful, unbalanced tormentor (James McAvoy), Split has an immediate urgency, opening with an abstracted daylight abduction and quickly establishing the stakes.

Three girls are being held in a dingy industrial space somewhere underground by a man who says they’re all awaiting the arrival of a monster he calls The Beast. In very short order it becomes evident that their captor literally contains multitudes: he suffers an especially profound case of dissociative identity disorder, and none of his personalities is particularly inclined to be helpful to his new guests.

McAvoy and Taylor-Joy immediately establish an engaging, fluid chemistry – and Betty Buckley pops up in a subplot as a concerned therapist who handily supplies us with the exposition denied to the other characters. And it’s all expertly shot by It Follows cinematographer Mike Gioulakis.

At 90 minutes this would be a gripping nail-biter, but Shyamalan can’t help himself. It’s been too long since the world has been graced by his genius, and he has to share it with us, giving one character flashbacks that are meant to be oblique and revelatory but play as so thuddingly obvious they become annoying rather than compelling. It’s also a pretty tin-eared treatment of fairly serious subject matter, especially in a movie that literally argues that mental illness gives you superpowers.

And if it’s not one thing, it’s another, as Split drops a final flourish that’s clearly intended to wow Shyamalan’s most loyal fans. It just feels like a desperate attempt to remind us of those days when he could do no wrong. And those days are long, long gone.