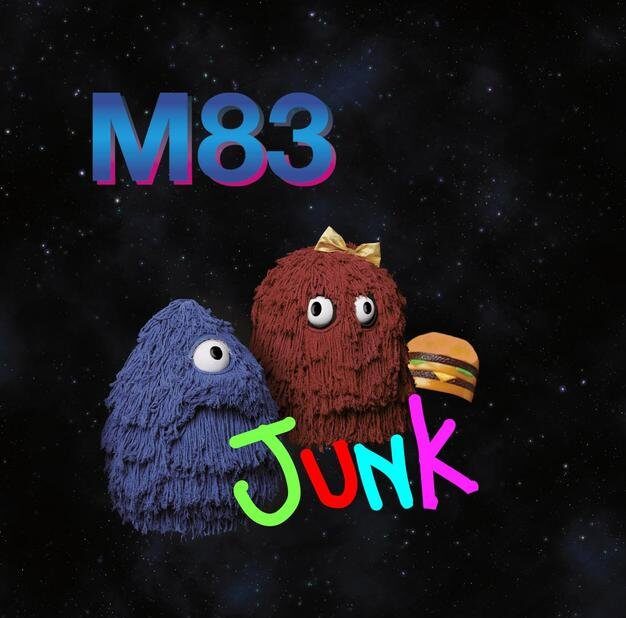 French band M83’s first album in five years begins with the bouncy, piano-driven Do It, Try It, an everything-but-the-kitchen-sink kind of song that features slap bass actually ripped from the Seinfeld theme song and spacey arcade game sounds. Immediately, bandleader Anthony Gonzalez has delivered on Junk’s bizarre album cover art depicting a couple of furry creatures chilling with a burger. From there he masterfully weaves myriad sounds and structures – mainly late 70s- and early 80s-influenced – into a remarkably strong, cohesive unit.

On 2011’s massively successful Hurry Up, We’re Dreaming, Gonzalez took on more of a frontman role in M83 but apparently found it limiting. He’s back in behind-the-scenes-wizard mode on their seventh album, and the results are brilliant. That also means lots of guest spots. A standout is sultry French singer Mai Lan, who features prominently in swaggering spoken verses on the beachy Laser Gun and singing alongside Gonzalez on the sensual Atlantique Sud, a duet that recalls Jane Birkin and Serge Gainsbourg’s classic team-ups.

That song and the hallucinatory fashion runway anthem Bibi The Dog mark Gonzalez’s first French lyrics on record. Meanwhile, OG weirdo Beck shows up on the jaunty Time Wind, but his presence is wasted in a song with a startling lack of dynamics. The graceful centrepiece, Solitude, with its strings-heavy, opera-sized melodrama and cinematic saxophone, is Junk’s most accessible highlight.

While Gonzalez nails this cosmic marriage of many distinct influences, the album’s simple compositions are its most poignant, especially the soft keys-‘n’-synth glow of finale Sunday Night 1987, a tribute to M83’s late sound mixer and friend Julia Brightly that features a stirring solo courtesy of master harmonica player Tollak Ollestad.