MAGIC MIKE XXL Rating: NNNN  Where to watch: iTunes With the. 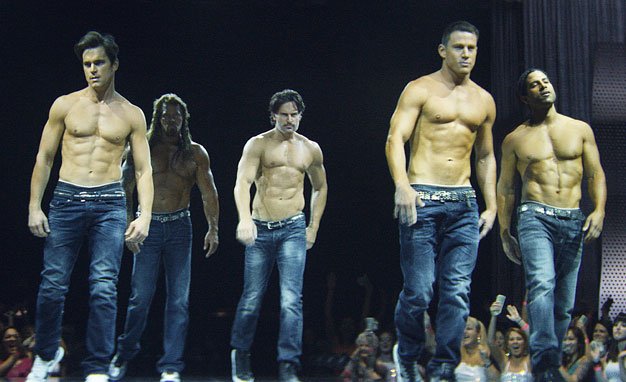 Channing Tatum and comrades-in-oil are back for another round in Magic Mike XXL.|Amy Schumer and Bill Hader in Trainwreck.|Inside Out opens June 19.

With the Kings of Tampa back together and on the road to a male-stripper convention in Myrtle Beach, Magic Mike XXL is the all-out man-party audiences wanted the first movie to be.

Steven Soderbergh’s 2012 sleeper was a surprisingly thoughtful inquiry into the lives of men who dance for money. In the sequel – directed by Soderbergh’s long-time filmmaking partner Gregory Jacobs, who produced the original – those characters are doing everything they can not to think about an uncertain future.

Jacobs stages a series of exuberant dance numbers broken up by scenes in which hot guys goof around together. And he’s made room for new female characters – played by the likes of Jada Pinkett Smith, Amber Heard and Andie MacDowell – who are more fully realized, and more dynamic, than most of the guys.

Channing Tatum continues to find new depths in the superficial but striving Mike, Donald Glover breaks out as a performer who knows exactly how to play to his audience, and Joe Manganiello’s Big Dick Richie gets the movie’s single best scene.

This movie is going to make a lot of people very happy.