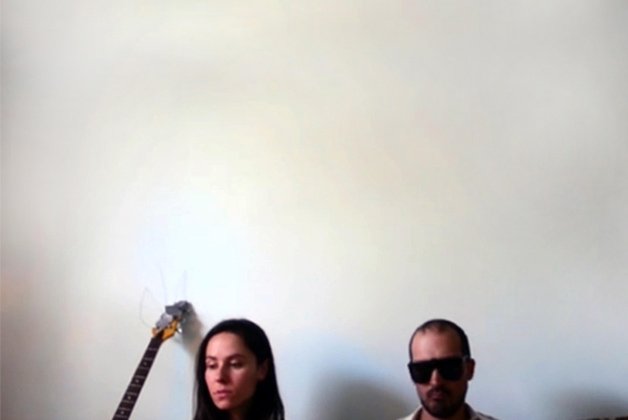 Montreal doom folk duo MaicaMia are skilled at making their minimalist compositions fill rooms with big bluesy guitar tones, haunting vocals and crashing percussion. But on their new album, Des Era, they tackle a new challenge: making room for other musicians and instruments in their arrangements without disrupting that delicate balance between empty space and dramatic chords.

“It’s a sensitive subject at times, but not in a bad way,” admits singer/guitarist Maica Armata from a tour stop in NYC.

“It’s fun to play around with the songs like that, and to be able to see them in a different light,” explains percussionist Jonny Paradise. “They can grow in ways they might not have if you weren’t exploring different instrumentation.”

During the recording of Des Era, producer Mauro Pezzente (of Godspeed You! Black Emperor) began adding bass tracks to fill out their sound, which led to his joining them onstage for live shows. They soon found themselves playing some gigs as a five-piece, a huge shift from the sparse, melancholic experimental ballads they were originally known for.

“We’re pretty adaptable now,” Paradise says. “We do some shows as a drums-and-guitar duo, some shows with the sampler playing all the beats, and we also do shows as a full band.”

The sampler is featured much more heavily on the new material, but they definitely haven’t jumped on the EDM bandwagon. The booming electronic kick drums and metallic synthetic hi-hats blend surprisingly gracefully with Armata’s reverb-drenched guitars, and give the songs a spooky, atmospheric quality.

And while they have no intention of writing bouncy pop tunes any time soon, the next album won’t be quite as dark.

“I know how to navigate minor keys more as a vocalist, but we are trying some major-key stuff,” says Armata. “You have to tell yourself you don’t sound like a dork just because you’re singing in a major key.”