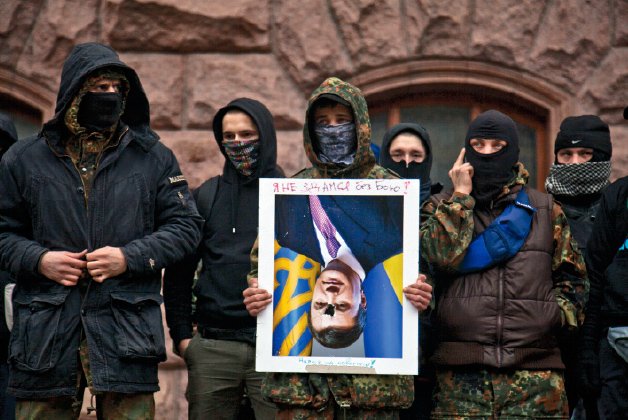 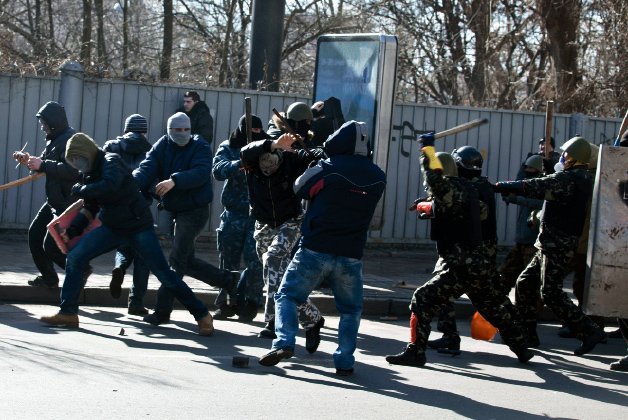 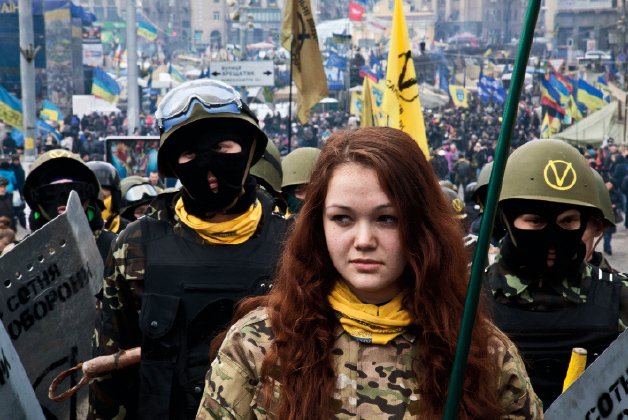 KIEV I now share something with the millions of immigrants who escaped conflict and came to North America with nothing but their stories and memories of unfolding history: the desire to share mine.

A month ago I arrived in Kiev to work on the score of a film about the 1932-33 famine known as The Holodomor.

My assignment was to travel across the Ukraine, record rare sounds from local masters and amateurs, and arrange them to tell the story of the genocide that left up to 7.5 million dead and continues to shape ongoing events in the nation’s struggle for independence.

Despite warnings from my American director to “stay away from the flame” and focus on the task at hand, I went to Kiev’s Independence Square, the Maidan – just once, I told myself.

What I found there was an ad hoc village of canvas tents, tires, fragmented crates, sliced barrels and flags. It was a self-sustaining enclave with field kitchens, libraries, clinics, toilets, warming stations and a stage. Bags of ice and snow scraped from the street by volunteers and reinforced with other materials formed massive barricades protecting the site from vehicular traffic, advancing riot police and “titushki” (government-hired thugs).

Volunteers guarded entrances, doled out hot food, sorted warm clothing and blankets, and carried supplies from one part of the Maidan to another.

The spirit of these volunteers – risking their lives in subzero temperatures – stirred my own Ukrainian ancestral passions and compelled me to remain at the Maidan for the next few weeks throughout the revolution, even as bullets and grenades hit bodies near me, and concerned friends in Canada and the United States begged me to return.

Most journalists focused on the leaders and parliament. I got to know the people who built this village – not politicians or generals or international financiers, but electricians, beekeepers, massage therapists, shop class teachers, tattoo artists, waiters, farmers, journalists, students – whose goals had outgrown a desire to have closer ties with Europe. Their aim became that of basic human rights: to live in a non-corrupt democracy in which the government defends the rights and freedoms of its citizens.

The Ukrainian president and Russian media minions mis-characterized these people as “extremists” and “terrorists” and even went as far as to claim the peaceful revolution was a neo-Nazi uprising.

For the next three days, government forces pushed back protesters, beat or killed them, took hostages and burned buildings.

I saw unarmed men, including journalists and medics, shot through the head, neck and chest by snipers and protestors trying to carry their bodies to safety shot with no less discrimination.

Meanwhile, the “terrorists” caught and detained police, told them not to follow the instructions of a corrupt dictator and set them free.

While snipers were still picking people off at the perimeter of the Maidan, those same plumbers, window-pane makers and piano teachers flooded the square with supplies: tires, logs, kielbasa, milk, gas and cigarettes.

Sasha the electrician and Ihor the I.T. specialist took shovels and sacks of rocks into their hands and rebuilt the barricades.

Iryna the marine biologist and Maria the chorister cleaned out the detritus of buildings ransacked by government forces and moved medical supplies to makeshift hospitals set up in cafés and cultural centres, where Tanya the medical student was getting her first practicum operating on injured frontline protesters.

As a new government takes shape and international media discuss how to save Ukraine from disintegration and financial collapse, tens of thousands of people from across the country flood the streets of Kiev with flowers, candles and rosaries to pay their respects to the deceased men and women hailed as the “heavenly battalion.”

When I return home to Toronto, I will go back to being a musician and professional celebrator, but I will not forget the epic fight that called on me to put down my violin and bottle of vodka and become something else.

Mark Marczyk, whose grandparents emigrated to Canada from the Ukraine during World War II, is the ringleader of Juno-nominated Toronto band Lemon Bucket Orkestra.

Russian President Vladimir Putin finds himself stuck between economic and diplomatic sanctions and attempting to overtake an unstable and divided Ukraine. After former president Viktor Yanukovych fled in the wake of violence that left 77 people dead and nearly 600 wounded when protesters demanded his resignation, Russia seized control of the Crimea region. Putin’s forces are currently occupying the area. The world’s editorialists weigh in on what may be store.

Days after the protests ended, Russia took advantage of a vacuum of power in the country and seized Crimea. The new composition of the cabinet has left people unsatisfied, feeling they lack professionalism and experience. The new government hasn’t brought security or unity to the country. Many question why they have not detained at least one official from the previous government.

German Chancellor Angela Merkel said Putin was “out of this world” in a recent phone call as she attempts to open a line between Moscow and Kiev. However, perhaps the West is out of touch, too. U.S. intelligence informed President Barack Obama that war in Crimea was not possible, even after Russia seized the area. The West needs the will to implement strict sanctions.

The interim government is struggling to avoid corruption while holding hands with Yulia Tymoshenko, herself a part of the establishment recently overthrown. Although many of Yanukovych’s former allies have left his side, they fear the profiteering will continue with different beneficiaries.

The Crimea is the biggest win for Putin because it’s 60 per cent ethnic Russian, because it has provoked a chasm like that caused by the fall of the USSR. The U.S. has done nothing but raise tensions by suspending its military links with Russia.

Interim Ukrainian president Olexander Turchynov, who posed with former prime minister Yulia Tymoshenko in Independence Square recently, may not be the best thing for Ukraine. WikiLeaks documents say Turchynov destroyed documents that allegedly implicated Tymoshenko as having links to organized crime in 2005.