NOW MagazineNewsWhy not make biking on sidewalks legal in the suburbs?

Why not make biking on sidewalks legal in the suburbs?

It's a tempting thought. Sidewalks along busier roads in Scarborough have few pedestrians. And it would help us create an instant, low-cost network of bike infrastructure. 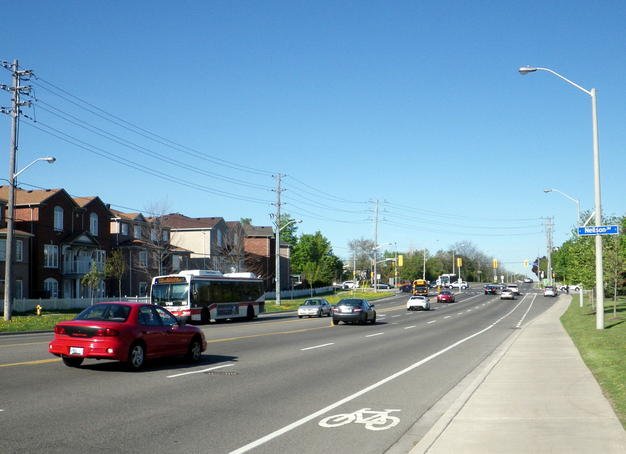 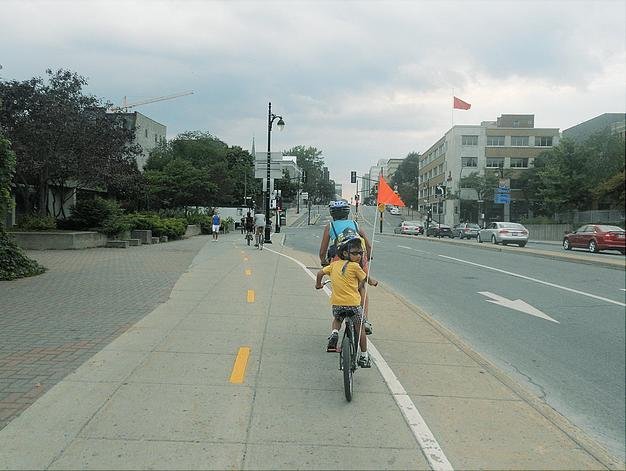 Cycling along Finch East recently, I noticed another rider biking in the same direction. He was going at the same steady, purposeful speed while cycling on the sidewalk. As far as he could see, the path ahead was clear.

But he was shunning the obvious choice. Finch on that stretch approaching Neilson has painted bike lanes that he could have cycled on without risking being ticketed. I was curious why he’d ride on the sidewalk and talked to him to find out.

He explained that he didn’t feel safe on the road, afraid a car or one of the many trucks might hit him. He was convinced the sidewalk was safer. We rode a few hundred metres side by side, and as we talked he found none of my arguments that the road is the safer choice convincing, and eventually we parted ways.

I keep thinking about this encounter. In this part of Scarborough many folks cycle to work or school or to run errands. Quite often they’re first-generation immigrants doing as they did back home, getting where they need to go while saving a bit of money by not driving. They fear the traffic and thus cycle on the sidewalk.

Sidewalks along busier roads like Kennedy and Midland have a steady trickle of cyclists. They’re slow riders, and the streets have few pedestrians to contend with, so conflicts between cyclists and walkers are rare.

The thought occurs to me: why not make riding on the sidewalk legal? It would legitimize what people are doing anyway. And the city could create an instant network of bike infrastructure at low cost. It’s a tempting thought, but does it hold up to scrutiny?

Cycling on sidewalks can be less safe than riding on the road. Outside of the downtown, where getting doored is the biggest danger, sidewalk riding is the top cause of collisions with cars.

To understand why riding on sidewalks in the suburbs isn’t as safe as it feels, you have to dig a bit deeper.

True, you won’t get sideswiped or pushed into the curb by car traffic. So far so good – until you meet cross-traffic.

This happens not just at intersections, but at people’s private driveways, shopping malls and industrial spaces. There, bike riders meet turning vehicles, and the risk of collision is high because drivers are more likely to miss cyclists scooting along the sidewalk than those on the road.

Cyclists are fast – faster than pedestrians – and thus surprise drivers by “appearing out of nowhere.” Drivers turning at intersections are often too busy sorting out whether it’s safe to turn to catch cyclists whizzing into the road from the sidewalk.

In fact, cycling on the sidewalk is a contributing factor in 30 per cent of car-bike collisions in Toronto, when cyclists cross a roadway or motorists exit a laneway or driveway.

Toronto’s own collision statistics show that the danger is higher at intersections, where nearly twice as many collisions occur (52.8 per cent) than in the stretches between intersections (31.9 per cent). On the other hand, though, the report notes that “collisions in which cyclists were riding on the roadway tended to result in slightly more severe injuries than those in which the cyclists were riding on the sidewalk or within the crosswalk.”

I prefer to ride on the road. And whenever I approach an intersection, I use extreme caution and try to determine whether a turning driver has actually noticed my bicycle.

But we also need to acknowledge that cycling will continue to grow as a low-cost way to ease our ever-growing congestion. Once we’ve accepted that, we will find designs for our cycling infrastructure that eliminate the need for a debate of whether cycling on the sidewalk is a good idea or not.

The case for allowing bikes on some sidewalks

• Toronto already has multi-use trails. Our waterfront and ravines are criss-crossed by them, and pedestrians and cyclists seem to get along just fine. It’s e-bikes that are the problem on those. They were banned from the paths in 2014.

• Sidewalks aren’t just for kids. Contrary to popular belief, it’s not tire size that determines which bikes can or can’t ride on sidewalks. That loophole was closed in 2014 otherwise, e-bikes would be allowed on sidewalks, which is another issue. The law stipulates that anyone under 13 can ride a bike on sidewalks.

• Surprise. There are rules for riding on sidewalks. And those rules, covered in chapter 950 of the Municipal Code, are: go slow, yield to pedestrians and walk it if you have to. The law doesn’t just apply to bikes. It covers skateboards, in-line and roller skates, scooters, toy vehicles, toboggans, sleighs or “similar devices.” It stipulates that “no person should ride a bicycle… recklessly or negligently or at a speed or in a manner that is dangerous to the public, having regard to the circumstances.”

The fine for an adult riding on a sidewalk is $60. The fine for riding recklessly is $90.

• We have sharrows (shared lanes) for bikes and cars on the street. Why not for pedestrians and cyclists on sidewalks? Dozens of jurisdictions in Europe and North America (including Montreal) have shared sidewalks for bikes and pedestrians.