Healthy eating: a way of life or a necessary evil? Whichever you choose, you'll dig these new eats - mixed-up salads and satisfying (and vegan-friendly) snacks and sandwiches, all served with a smile. 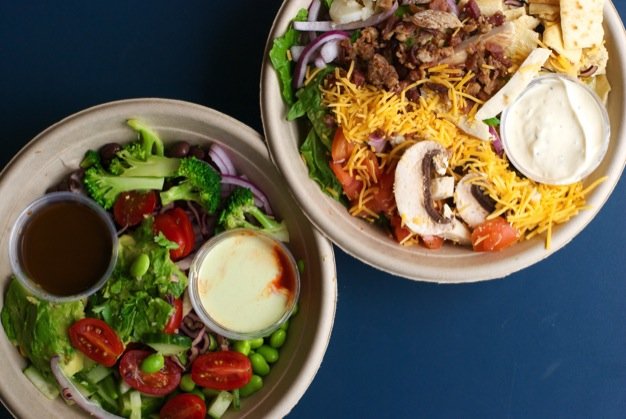 If you, like Elaine Benes, hunger for a big salad, you could do a lot worse than this cute little takeout shop in Kensington.

AAamazing Salad (that’s two big As, one little A) moved down from the York University campus to what is essentially Toronto’s Granola Central earlier this year. But in contrast to the patchouliness of the rest of Kensington, AAamazing walks the line between institutional and friendly.

Past the sole six-seater table and down a couple steps, you can pick from the menu of bowls and salads, all available on quinoa, kale, romaine, soba noodles (!) or as wraps.

Everything’s customizable, with some unusual toppings like dried figs, popcorn chips and nori on offer. Nothing groundbreaking, admittedly, but I knew something interesting was going on here when I watched owner Eva Liu struggle for a good 30 seconds to fit the lid on top of the pile of chicken, bacon bits, avocado, hearts of palm and pita chips that made up my Super Salad ($12.99).

The dressings are house-made, and that’s where this place really shines: The aforementioned salad came with a thick, ultra-zingy low-fat Caesar, while the quinoa-based Rainbow Wasabi bowl (with edamame, black beans, corn, avocado, tomatoes and broccoli, $8.99) features an ingenious blend of pale-green yogurt wasabi, rich balsamic vinaigrette and an extra swirl of Sriracha that all melds right into the quinoa.

But the truly aaamazing thing here is the service. Since I got my dressing on the side, Liu asked, did I want a bag to mix my own salad when I got back to the office? (Sure.) Even though I ordered myself a can of fancy organic blackberry soda, did I want the two free ginger ales that came with my order anyway? (I did.) And did we mention they’re donating a percentage of every sale to SickKids? 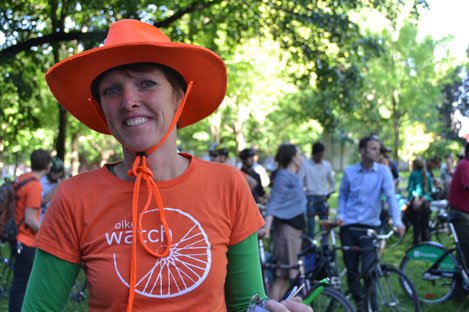 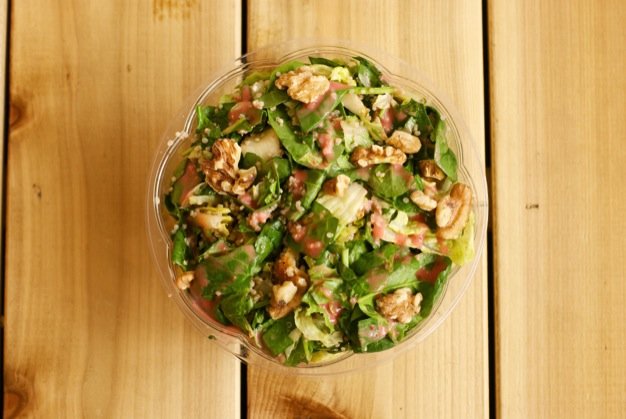 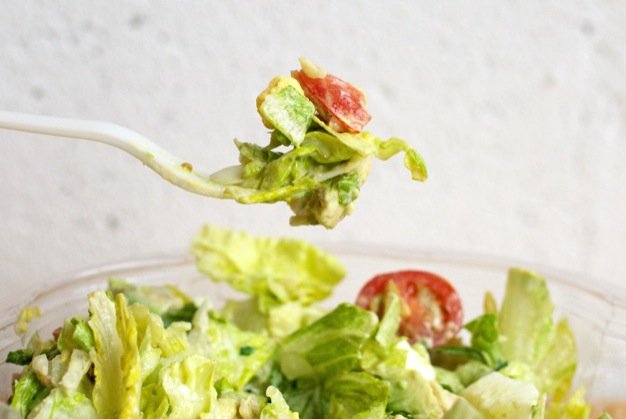 Ask any New Yorker and they’ll tell you the Big Apple has perfected both pizzas and bagels. (Seriously. Ask any of them. They will absolutely tell you.)

To that list, we can now add the humble salad. The chopped salad, a dish long spotted up and down the East Coast, became such a universal lunchtime fixture that the New York Times devoted 1,200 words to it in 2013.

It’s a simple concept: order your fixings as usual, and the folks behind the counter will dump it out and, using a crescent-shaped blade called a mezzaluna, hack it all into bite-sized pieces. (No more trying to wedge a giant, naked lettuce leaf into your mouth.)

Long-time best buds John Gaganiaras and Bill Angelopoulos (the latter’s family owned a restaurant, the former’s ran a produce company) wanted to be the first to bring the concept to Toronto. The result was the Baro, an eco-chic little salad bar on Queen West.

“It’s something you just really have to try, having it chopped up,” Angelopoulos says. “It combines the ingredients all together. It’s more of that consistency factor – every time you take a bite, it’s going to be the same bite.”

The menu has nine pre-set options, all of them customizable from the list of around 50 house-made toppings and dressings. There’s everything from the Avotaco ($10.80), with avo dressing and Mexican-spiced beef, to a kale Caesar ($9.20) with pecorino crisps and a fresh squeeze of lime, or a Southern rendition with fried chicken and hot sauce ($12.90).

“That was part of the premise – giving people options outside the box,” Gaganiaras says. “Sometimes you want to dirty it up a little bit.”

They pile your meal into a bowl, then work the handles until it’s pulverized to your desired degree (light, medium or heavy chop). I sampled a Cobby Blues, a mix of chicken, bacon strips (woven together for better chop-ability), egg, avocado, romaine and a nicely toned-down buttermilk blue cheese dressing. And, sure enough, I could get all of that goodness into a single forkful. Revolutionary! 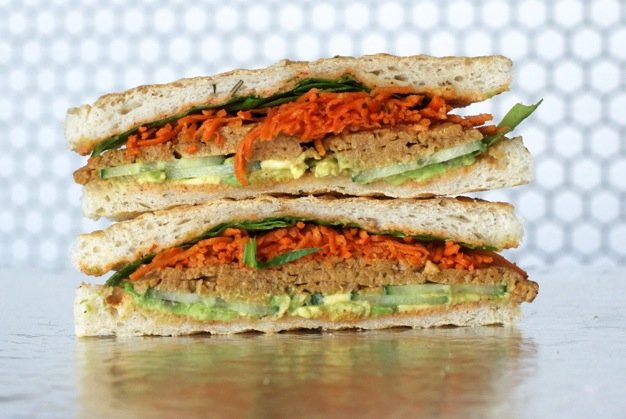 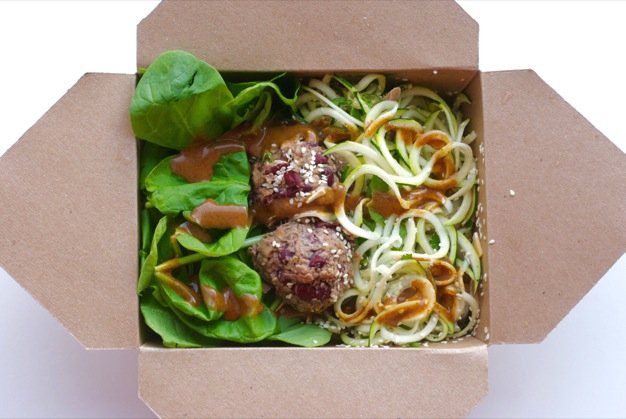 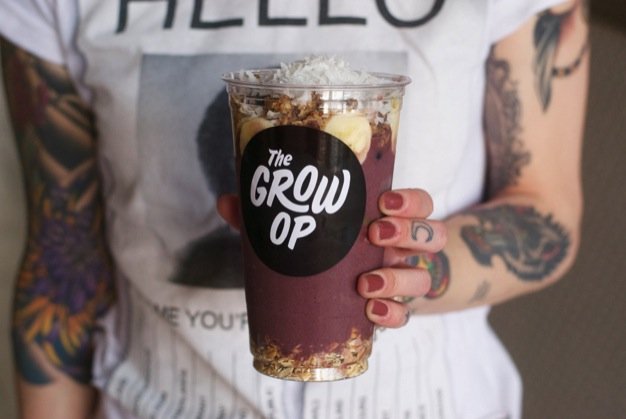 They keep the tunes nightclub-level loud at the Grow-Op. It’s a clue that you’re not in your average holier-than-thou vegetarian restaurant. Then again, it might just be to cover the non-stop roar of the blenders.

Clubs, as it turns out, are in this Ossington spot’s DNA. After 15 years in the club industry (most notably, booking talent and events at the Guvernment), owner Jose Rodriguez decided to make a move into the health food biz.

In an exposed-brick room decorated with graffiti-style paintings of grinning cartoon fruit, Grow-Op serves a varied clientele: athletes and clean-eating freaks, DJs looking to beat their hangovers with soup or a smoothie, carnivorous dudes who are dragged in by their girlfriends and come in the next day fiending for another sweet potato sandwich.

Half a year after opening, Grow-Op’s found a diehard fan base for its juices and smoothies. This winter, to make the #01 smoothie, “I had to get watermelons from, like, the black market,” Rodriguez says.

The best-known dish might be the açaí bowls, featured by so many fitspiration Instagrammers that people frequently walk in, hold up their phones and say, “Gimme one of these.”

Made from blended, frozen açaí berries, they’re hulking 24-ounce parfaits layered with granola, maple syrup, coconut and fresh fruit. They sell for $9 ($10.50 if you opt for the version beefed up with organic peanut butter), but you won’t find a heartier (or healthier) breakfast or snack anywhere on the strip.

If you want something to sink your teeth into, sandwiches come on marvellously fluffy vegan rosemary focaccia from OMG for a reasonable $8.50 each. On top of the aforementioned sweet potato (with goat or cashew cheese), there’s also a satisfying, flavourful vegan “reuben” with chickpea tempeh, vegan Thousand Island, avocado and sauerkraut, as well as a baked falafel sandwich.

Salads include a box with noodles made from zucchini topped with bean meatballs and a super-decadent almond butter and sesame dressing ($9). This summer, Grow-Op rolls out a kimchi-kale salad and a classic Greek topped with house-made vegan feta. Rodriguez road-tested that last creation on the toughest critic he could find, a Greek buddy of his. “I give it to him and tell him, every time, ‘You know this is vegan, right?'”

Rodriguez mimes a wink and a tap on the arm. “He’s like, ‘Yeah, right. This is vegan.'” 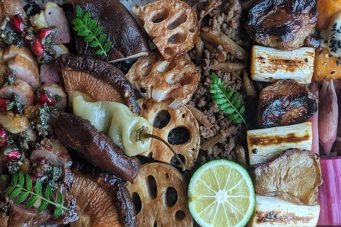