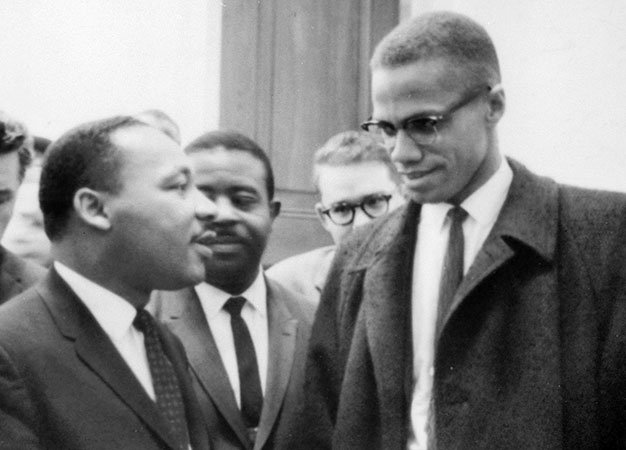 Malcolm X (right) in his first and only meeting with Martin Luther King Jr.

The legacy of Martin Luther King Jr. is easily grasped and justly celebrated, more so this Black History Month marking the 50th anniversary of the seminal march he led from Selma to Montgomery that helped change the course of the civil rights movement.

King’s effect risked no misinterpretation: “Freedom Now,” an end to Dixie apartheid and the employment of Gandhi’s tactics of mass mobilization and non-violent resistance (or civil disobedience) as the means to achieve liberation, clear policies that united Americans of every race, religion and creed. He focused on abolishing infringements to equal rights for African Americans and, somewhat less so, for the poor.

(Some conservatives quote the line from King’s 1963 Dream speech about folks being judged not by their skin colour, but by “the content of their character” as proof that he opposed affirmative action, thus mischievously ignoring his critique of colour-conscious class stratification.)

Not only did X’s teaching (and preaching) catalyze a radical shift in  black consciousness and self-image – and inspire black arts and black power movements in the 1960s in America and Canada, it influenced cultural icons as diverse as Miles Davis and Muhammad Ali, Spike Lee and Angela Davis, Public Enemy and Amiri Baraka.

In his April 3, 1964, speech, The Ballot or the Bullet, X told his Cleveland, Ohio, audience that, “the government has failed you,” that American authorities fail to protect the civil and human rights of African Americans. One glaring example he cited was the 1955 case of Emmett Till, a 14-year-old black youth brutally murdered by two white men in Mississippi for having allegedly whistled at a white woman. His assailants were tried and acquitted by an all-white jury.

Responding to such injustices, X advocated that African Americans arm themselves, an idea that led, in 1966, to the founding of the Black Panther Party for Self-Defense.

Then FBI director J. Edgar Hoover called the group the greatest threat to the security of the United States.  Long viewed as a militant black nationalist organization bent on armed revolution, the Panthers defended  the community against police brutality by asserting their constitutional right to bear arms. The group also offered community health and social programs. Its ideas don’t seem all that radical in the current firmament of police-minority relations stateside.

Its purpose was to prevent white-dominated police forces from instituting, in black communities, what X labelled, in a May 5, 1962, speech, “a police state.” In the same speech, he attacked “Gestapo tactics,” such as police stopping and interfering with the civil liberties of black men on the street. He could have been talking about today, and not just in Ferguson.

Indeed, it’s vital that we recognize here in Canada the over-policing and over-incarceration of African-Canadian and indigenous people.

Consider also the late, unlamented Toronto Police Service practice of carding and you can understand why X’s 50-year-old speeches may score applause here. Truly, his analyses of police-minority relations bear thinking through.

Depending on circumstances, provably over-policed communities might want to consider potential remedies like class-action suits in respect to violations of rights protected by the Charter of Rights and Freedoms. Or they could petition municipalities to transfer police funds to community jurisdiction for community-led policing as well as social services.

The Ballot or the Bullet address also voiced X’s idea that the U.S. is ill-equipped to address issues of racism against blacks. He believed conditions of blacks in the U.S. were a “violation of human rights” (beyond the ability, or willingness, of the government to solve) and advocated that African Americans “take the [U.S.] government to the World Court [UN] and accuse it of genocide.”

This suggestion was ultra-radical in a Cold War context. The U.S. government would have hated losing face in a propaganda showdown with the tyrannous USSR.

The tactic has been adopted today. Native Americans from South America to Manitoba, weary of official shilly-shallying and naysayers, are taking threats to their traditional way of life to the United Nations.

They’re demanding a higher share of the revenues and wealth that their “native land” generates. Canadian governments, too, have found themselves answering to world bodies for policies that have left indigenous children the poorest Canadians and those most prone to disease. Not to mention the shame of missing and murdered indigenous women.

Another still-urgent X speech, Message to the Grass Roots, delivered on November 10, 1963, pointed out that “of all our studies, history is best qualified to reward all research.”

Frequently, X refers to history to explain the contest between the formerly colonized world and the former European empires, the race and class lines of America, but also the predicament of the “so-called Negro” who suffers from self-hatred and remains ignorant about African civilizations and the crime against humanity that was Transatlantic slavery.

Characteristically avant-garde, X adopted the language of socialism, referring to “the black masses” and “the grass roots.”

Wielding the diction of black nationalism, he used his rhetorical devices to transform “Negroes” and “coloureds” (as I was called as a boy in 1960s Nova Scotia) into blacks and Afro-Americans and thus African Americans and African Canadians.*

Surveying world affairs in 1964, X stated categorically that America and the old-line European imperialists could never win another major ground war, pointing to the UN stalemate armistice in Korea in 1953 and the French defeats at Dien Bien Phu, Vietnam, in 1954, and Algeria in 1962.

He reasoned that military superiority could never defeat, long-term, “rice-eaters” with “heart” or sneakered guerrillas with “blades.”

Yes, the Coalition of the Willing crushed Saddam Hussein’s Iraq in 2003. But that “victory” spawned the current ISIS insurgency.

Though backward on gender and sexual orientation, integration  (at first) and non-violence, X remains most vital for his insistence that the oppressed, whatever their background, practise “political maturity” and undertake political analyses resulting in actions reflecting enlightened self-interest, not sentimental folderol.

As he said in an 1965 appearance in Toronto on CBC’s Front Page  Challenge a little more than a month before his assassination:  “I don’t in any way encourage black people to initiate acts of aggression indiscriminately against whites. But I do believe that the black man in the United States, and any human anywhere, is well within his right to do whatever is necessary, by any means necessary, to protect his life and property, especially in a country where the federal government itself has proven that it is either unable or unwilling to protect the lives and property of those human beings.” That’s his deathless importance.

George Elliott Clarke is the poet laureate of Toronto and teaches African-Canadian literature at the University of Toronto. His latest book is Traverse (Exile, 2014), an autobiographical poem.