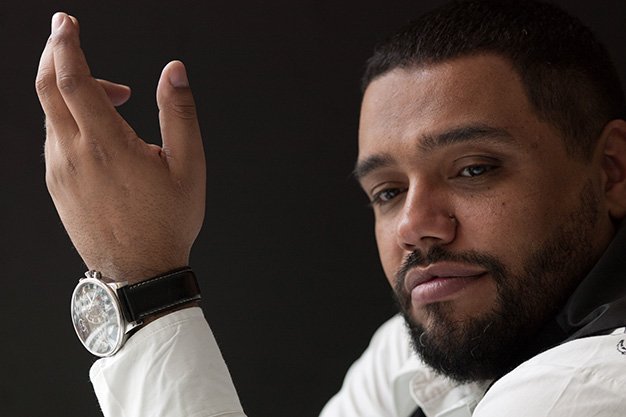 For those unfamiliar with hip-hop’s roots, it’s not uncommon for spoken word performances to be incorrectly referred to as “freestyles” or dismissed as “missing a beat,” especially in modern rap’s production-centric culture. The timing couldn’t be better for British-born Malik Al Nasir to educate us about two artists who defined the craft of spoken word.

From his 1971 anthem The Revolution Will Not Be Televised to being sampled on the Drake and Rihanna 2011 duet Take Care, Chicago born Gil Scott-Heron had an influence that spanned genres and generations. And in 1973, Brooklyn-born Jalal Mansur Nuriddin released his Hustlers Convention album under the alias Lightnin’ Rod, which is credited for much of the style and content that can still be heard in hip-hop more than 40 years later.

Through his writing, music and live performances, Malik Al Nasir is continuing the legacy of his late mentor Scott-Heron, but also is also on tour with his current mentor Jalal Mansur Nuriddin. Known as “The Grandfather of Rap,” Jalal’s influence on hip-hop is explored in the new documentary Hustlers Convention, for which Malik is an Associate Producer while Chuck D (of Public Enemy) serves as Executive Producer.

We spoke to Malik ahead of his and Jalal’s upcoming visit to Toronto for Saturday’s screening of their documentary, as part of Harbourfront’s Kuumba festival – followed by spoken word performances.

You’ve been mentored by two of the most celebrated spoken word artists of all time. How useful is mentorship to a young artist, and do you feel there is enough of it in the hip-hop community today?

I was fortunate in 1984, as a young homeless black teen in-and-out of violent reform schools, to get backstage and meet Gil Scott-Heron in my hometown of Liverpool. Gil saw something in me that I didn’t at that time see in myself, my potential. Having grown up in the Deep South and the ghettos of the east coast, without a father himself, Gil took pity on me and took me on the road with the band and mentored me. It was the most positive experience that had happened in my life up to that point. What it did was foster in me a sense of self-worth and hope. Having Gil as a mentor was the difference between life and death for me.

I travelled and toured with Gil in the USA, UK and Europe, learning the industry, making myself useful as a roadie and gradually taking on more of a road management role. I had several encounters with The Last Poets from 1986 until 1991 [when] Jalal Nuriddin, a founder member of The Last Poets, settled in Liverpool and I got to meet him.

I count myself as one of the most fortunate guys alive. Many people have been influenced by the works of The Last Poets and Gil Scott-Heron, but I don’t think there’s another poet alive who had the personal tutoring and mentoring that I had under their very hands. That places me with a unique responsibility to keep the message alive.

It would be nice to see some of the big rappers do what Gil and Jalal did for me, for some of the young kids today. Chuck D is pretty proactive and has nurtured some great young talent, but most of the high profile rappers are all about the benjamins and that’s sad. We definitely could benefit from a large-scale mentoring program and the resources are definitely there within rap’s royalty, but the will is sadly lacking in my opinion.

Gil Scott-Heron helped you overcome illiteracy, to the extent where you were able to write a book of poetry dedicated to him. How did Gil influence your writing?

Gil Scott-Heron was a poet, a griot, an activist and an educator. He encouraged me to learn to read and write fluently. I was taken out of school at 9 years old and placed in a system where education was rudimentary at best, so by 18 years old I wasn’t much more literate than I’d been at 9 when I entered the care system. Gil called me out on that in 1988 when we were touring on the east coast for Black History Month. That was the start of my learning to read properly and using poetry as a tool to develop language skills – and also to overcome my issues by getting them out on paper, and ordering my thoughts in a way that was coherent.

Gil guided me through that process, which was very cathartic, and resulted in me producing a whole body of work that formed the basis of my first published work – a book of poetry called Ordinary Guy. When Gil saw the book, he was elated and offered to record one of the poems for my double album, Rhythms of the Diaspora.

Jalal Mansur Nuriddin created what could be considered the first rap-rock collaboration, by recording with Jimi Hendrix in 1969. What’s the best piece of advice that Jalal has given you about collaborating with other musicians, in recordings or on stage?

Alan Douglas had Hendrix and The Last Poets on his label and he loved the idea of the Jail toast, so he got Jalal and Hendrix to record the toast called Doriella Du Fontain together. However, it wasn’t released when recorded in the late 60s – it didn’t come out till the mid 80s on Celluloid Records.

The best piece of advice that Jalal ever gave me about working and collaborating with other artists when recording or performing on stage was based upon some advice he’d received years earlier from jazz legend Max Roach, who’d told Jalal to “Master your axe!” That’s why I waited so long to emerge as an artist. I was busy understanding the history, the politics and the culture as well as the poetry and the business before I decided to emerge.

How do you feel about Kanye’s place in music history amidst all the controversy that follows his successes?

Kanye came to Gil’s funeral in Harlem [in 2011] and sang the track Lost in the World, which takes the entire composition of Gil’s spoken word and drum piece Comment No 1. After the funeral I spoke to Kanye and gave him my story.

When I toured with Gil on his last tour of the UK in 2010, he spoke every night about Kanye sampling him and how on Gil’s last album that he also sampled Kanye. Gil described this as a “natural exchange that exists between artists.”

Kanye’s place in music history is unquestionably assured. People expect every celebrity to be all things to all people but that’s not a realistic expectation. Kanye is the best at what he does and no one comes close. Regarding his personal life and controversy – show me anyone who doesn’t have controversy in their personal lives. That’s not how his art should be judged. Do we judge Billie Holiday, Etta James or Miles Davis by their personal lives? We look at their body of work and we judge them on the validity of that. That’s enough for me.

How was your experience working with Chuck D to produce the Hustlers Convention film about Jalal Mansur Nuriddin? What’s your favourite song on the original album?

Doing Hustlers Convention was not the first time I’d worked with Chuck D. I co-owned a label based out in Dubai and we’d signed a bunch of artists, one of whom was the most phenomenal drummer called Swiss Chris. I commissioned an album, and Swiss decided to record it at Chuck D’s house in Long Island with Public Enemy’s DJ Johnny Juice Rosado as the producer.

My favourite song on Hustlers Convention is Sport, cause I always figured that he was Jalal’s alter ego – but you’d have to ask Jalal about that.