NOW MagazineNewsMap: Ford Nation is not what it once was

Map: Ford Nation is not what it once was

Where Doug Ford lost the race for mayor 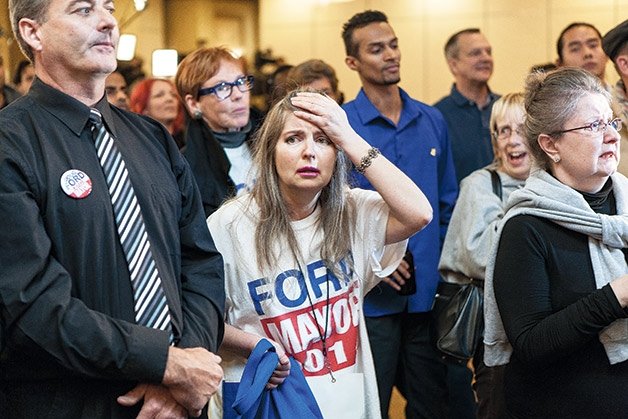 Ford Nation is not what it once was. While many suburban wards saw a majority of voters cast ballots for Doug Ford, there was a significant drop in support among previous strongholds in Etobicoke, North York and midtown Toronto.

It’s hard to pin down whether the Ford fade out in these wards was due to the scandals and shenanigans of Rob’s tenure as mayor or the last-minute change-up with Brother Doug. Either way, the percentage of Torontonians who voted for Ford dropped from 2010 and 2014 in all but six of the 44 wards: Ward 8 (York West), Ward 7 (York West), Ward 12 (York South-Weston), Ward 42 (Scarborough-Rouge River), Ward 9 (York Centre) and Ward 1 (Etobicoke North).

What about the epicentre of Ford Country? Though Ward 2 had the second highest amount of Doug Ford supporters in Toronto, they showed more support for Rob back in 2010. In 2014, Doug received 67.91 per cent of the ward’s mayoral votes, but Rob snagged nearly 12 points more with 79.6 per cent of the vote four years ago.

But it wasn’t these smaller decreases that hurt Doug’s run for mayor. Some wards where a majority of voters cast ballots for Rob saw significantly more residents snub Doug at the polls. Four years ago, the Ford name captured about 68.05 per cent of mayoral votes in Ward 4 (Etobicoke Centre), but it took 45.29 per cent in 2014. Ward 3 (Etobicoke Centre) also saw a significant decline, with 65.18 per cent voting for a Ford in the last election, an amount that dropped to 41.36 per cent in this election.

Some of the tallies in mid-town saw even bigger declines. Ward 25 (Don Valley West) and Ward 16 (Eglinton-Lawrence) both saw the percentage of Ford voters drop by about 30 points in 2014.

See the map above for more details. Election results from 2014 based on the City of Toronto’s unofficial results.