Marineland wildlife dying to entertain you

Several hundred animal rights and liberation activists marched five kilometres through the streets of Niagara Falls to the gates of. 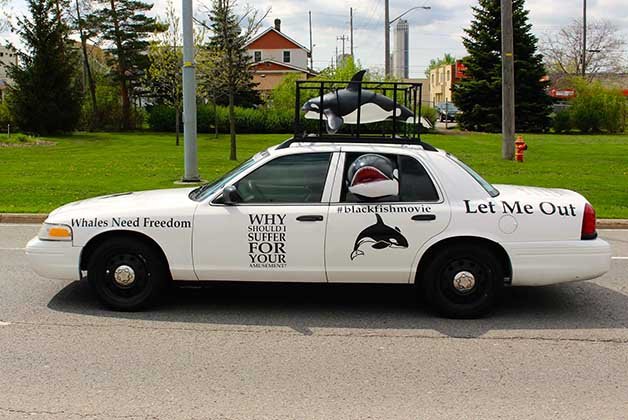 Several hundred animal rights and liberation activists marched five kilometres through the streets of Niagara Falls to the gates of Marineland for opening day demanding the release of the park’s captive wildlife.

John Holer, the park’s owner, was onsite but did not address the crowd directly. He watched the protest from his SUV in the parking lot while pointing and laughing at the demonstrators.

Marineland Animal Defense organizer Riaz Sayani-Mulji says that with documentaries like Blackfish and The Cove more people will protest at parks like Marineland. The Cove addresses the issue of dolphin hunting in Japan. Blackfish tells the story of Tilikum – a captive orca whale involved in three human fatalities who has been used to breed SeaWorld’s many orcas in the US.

“I think the reason you see so many people here today is because public consciousness in Ontario has had a profound shift in terms of animal captivity,” says Sayani-Mulji. “So a for-profit animal captivity facility like Marineland is on the brink of extinction.”

In 2006 Marineland entered into a loan agreement with SeaWorld to breed Ikaika – one of the many captive born offspring of Tilikum – with Kiska – wild-caught in the waters off Iceland in 1979. After a lengthy court battle, Ikaika returned to SeaWorld in 2011 after the US-owned sea park claimed that Marineland did not have the facilities to “physically or psychologically care” for such animals.

Kiska remains in captivity and her former trainer says she swims listlessly scratching herself against the grates that line her pool.

After years of protests, in 2013 Marineland obtained a court order restricting MAD’s use of megaphones and prohibits the use of certain language including, “abuse,” “animal abuse,” “blood,” “torture,” “criminal,” and “arrest John Holer” in chants or on signs.

As a result, protestors have created new signs like “A tub is not a home” and “Dying to entertain you.”