Actors sink their teeth into juicy play about an unravelling couple 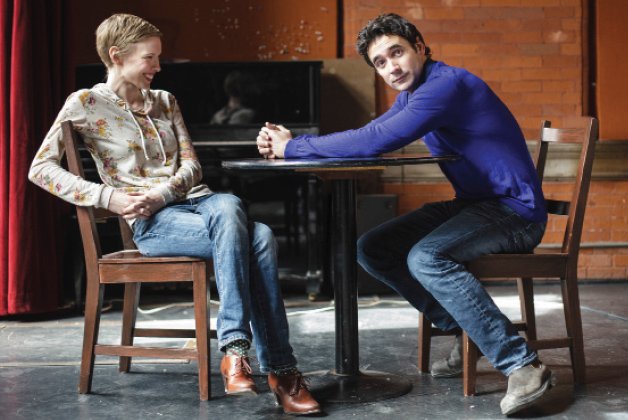 Whether we intend it or not, our key relationships occasionally involve little fibs.

Amy Herzog’s Belleville focuses on a different magnitude of falsehood. According to actor Christine Horne, Herzog wrote the script “to examine a marriage with a really big lie at its centre.”

Horne and Allan Hawco play the couple, Abby and Zack, whose lives and relationship unravel when secrets come to light.

The action takes place in the culturally diverse Belleville section of Paris, where the American couple has moved so that Zack, who works for Doctors Without Borders, can help find a cure for pediatric AIDS.

With its twists, turns and red herrings, the show is as much a mystery as a look at a corroding marriage.

“I had a lot of initial feelings about Zack when I read the script,” recalls Hawco, co-founder of the Company Theatre, which presents the play in association with Canadian Stage. “But the most obvious ideas aren’t necessarily the most significant ones, as we’ve discovered in rehearsal.

“Zack goes through the kind of pressure I never want to experience in my own life,” he continues, “and I was uncomfortable by the end of that first read. But over the course of time, digging into the script, I started to empathize with his situation, having to behave a certain way to get what he wants, making justifications for the choices he’s made though they might not be the right thing to do.”

Horne’s character is easier to discuss but no less multi-layered.

“Abby finds herself with little to do in Paris besides teaching yoga,” says Horne, whose stage work includes Iceland and The Turn Of The Screw and who’s known to TV and film audiences for Lost Girl and The Stone Angel.

“Her mother died several years previously, which has intensified her relationship with her family back in the States. Her life is ruled equally by an intense marriage and an iron umbilical cord with her family.

“She’s still struggling with anxiety and depression, and doing her best to get off the medication she’s been taking for years.”

The production marks the return of director Jason Byrne, who helmed Company Theatre productions of A Whistle In The Dark, Festen and The Test. His unusual style of working relies on far more than the words on the page.

“The play goes under a microscope in a way that some other directors don’t consider,” admits Hawco, who’s best known as Jake Doyle in CBC’s The Republic Of Doyle, which just wrapped its fifth season.

“We didn’t begin, as is usually the case, with a table read,” continues Horne. “We weren’t confined to the words or even the order in which things happen in the script. Even so, there’s a structure to what Jason does, one that at first allows us to make every possible choice.”

The script provokes strong reactions from the two actors, who compare Abby and Zack’s relationship to that of George and Martha in Who’s Afraid Of Virginia Woolf and of Macbeth and his wife.

“I also responded to its humour,” nods Horne, “which is witty, awkward, uncomfortable and real. I like its suspense and the love at its centre.

“Belleville may be about a fucked-up love story, a look at unhealthy, toxic, codependent love, but this couple’s relationship has lasted this long for a reason.”

The opening night of the Company Theatre’s first production, A Whistle In The Dark: