NOW MagazineCultureMusicalsMarry Me A Little

Marry Me A Little 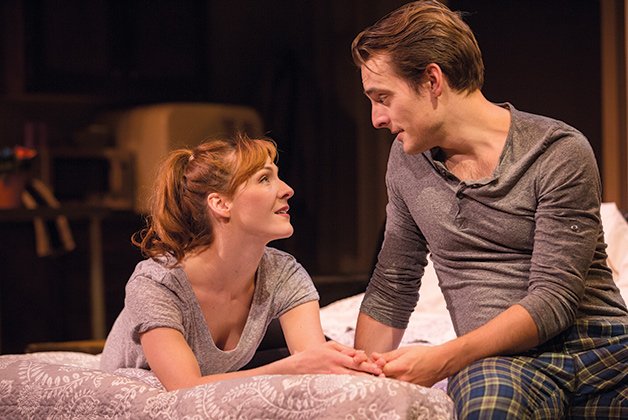 Composer and lyricist Stephen Sondheim is the best writer of musicals of the late 20th century.

But his songs are so carefully integrated into his shows that to perform them out of context is jarring. A Sondheim cabaret or revue is one thing, but what about a show consisting of unrelated numbers with no dialogue, intros or interconnective narrative tissue?

That’s what Craig Lucas and Norman Rene have done in 1980’s Marry Me A Little, originally set in separate Manhattan apartments to illustrate the loneliness of two unnamed characters.

Over the years it’s been remounted with different concepts (a same-sex cast, four people instead of two). Now Adam Brazier directs a fascinating version at the Tarragon that imagines the beginning, middle and end of a relationship. “He” (Adrian Marchuk) is a set-in-his-ways composer who falls in love with a singer (Elodie Gillett). Soon “she” moves in with him, and things seem fine until she brings up marriage. Sondheim shows never end happily, right?

In Ken MacDonald’s eerily realistic loft space, Brazier’s direction is imaginative and inventive. The actors delve deeply into the songs, grounding their performance with specific details and echoing other shows, particularly Merrily We Roll Along and Company. A song cut from the latter, Happily Ever After, even contains lyrics from the famous song Being Alive.

But alas, connecting the songs with what’s happening onstage is occasionally like forcing square pegs into round holes. Things just don’t fit. Sondheim’s lyrics are full of subtext in the mouths of real characters that’s lost when they’re sung by generic types.

So while the actors are excellent, the direction brisk (including Paul Sportelli’s musical pacing) and Gareth Crew’s lighting atmospheric, it’s not a perfect marriage of content and style.

On the other hand, Brazier has got the rights to use a song from the upcoming Into The Woods movie. So there’s that.