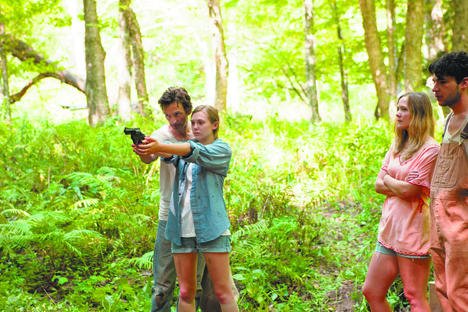 John Hawkes and Elizabeth Olsen are right on target in Sundance fave.

John Hawkes and Elizabeth Olsen are right on target in Sundance fave.

Sundance went wild for Sean Durkin’s intense, actorly study of a young woman named Martha (Elizabeth Olsen, better known as the younger sister of Mary-Kate and Ashley), who flees a cult and crashes with her sister (Sarah Paulson) and her new husband (Hugh Dancy), who haven’t the slightest idea how to help her through her decompression.

The narrative shifts fluidly between Martha’s shaky recovery and flashbacks to her time away, dominated by a pitch-perfect John Hawkes (Winter’s Bone), whose power is intriguingly at odds with his scraggly, skinny carriage. That’s part of the character’s appeal he doesn’t appear the least bit threatening, until he turns on you.

Durkin confidently escalates the psychological tension, easing visual elements into the frame to trigger Martha’s tangled memories. The time-shifting reminds me of Atom Egoyan’s jumbled narratives, but Martha Marcy May Marlene has a cleaner, clearer and more chronologically ordered take on where it’s going, anchored by Olsen’s wide-open performance as a lost young woman trying to figure out who she’s supposed to be.

The ending will piss off a lot of people, but I think it’s perfect.