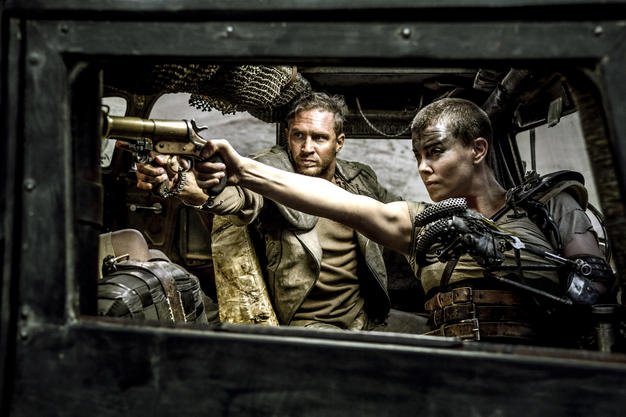 Tom Hardy and Charlize Theron: you better not cut them off in traffic.|Director George Miller 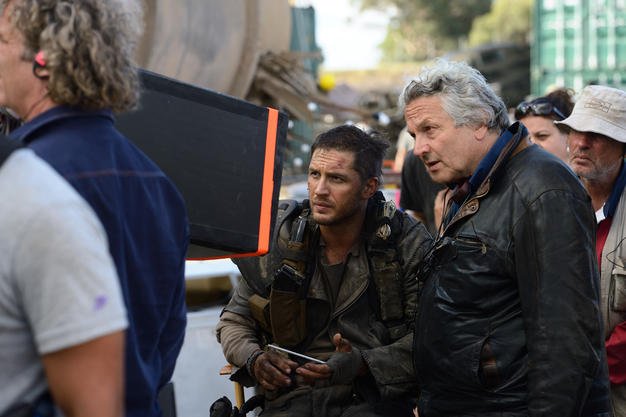 How jet-lagged is George Miller? A latte the size of my head and four cans of Red Bull have just been delivered to our interview suite, and they’re all for him. The Australian filmmaker – who turned 70 earlier this year – is exhausted and struggling for words after a marathon press weekend and a late flight to -Toronto.

“If my kids saw me drinking Red Bull…” he mutters, popping one of the cans. “I never drink that stuff.”

You wouldn’t know it from Mad Max: Fury Road, which plays like speed on the screen, with spectacular action work and vehicular stunts that put a certain other full-throttle franchise to shame. But, then, Miller has been making Mad Max movies since before Vin Diesel’s parents bought him his first Big Wheel.

Coming back to the wasteland after 30 years away – and returning to live action after a decade spent making the CG-animated Happy Feet movies – Miller knew just one thing: Fury Road had to be real.

“We don’t defy the laws of physics,” he says. “There’s no flying humans, there’s no spacecraft, so there’s only one way to do it. Practical, real-world vehicles, with real people in a real desert. It’s hard to create differently than that. You could do it [with] green screen, but it wouldn’t be very convincing.”

Which isn’t to say there was no digital work involved. But for the most part, Miller employed CG trickery to remove elements from his images rather than add them – taking out visible safety wires around the actors, for example.

“When Max is hanging upside down between the two wheels of the War Rig hurtling across the wasteland, that’s Tom Hardy,” he says. “You’d erase the tire tracks on the road from previous takes – there was a lot of that. And we were able to change skies and enhance some landscapes, and of course that toxic storm we were able to do [digitally]. But everything else, yeah. It was hard: 130 days, big stunts every day. It was very, very tricky. But that was the only way to do it.”

He’s waking up now, becoming more animated. We talk about the ideas that drove this chapter of the story, and where it fits into the overall continuity.

“The first three films weren’t that connected,” he says. “They were unified by Max, [and] the attitude was there, but each was made with a different budget and at a different purpose.”

Fury Road is spiritually closest to The Road Warrior, Miller says, “because it’s a chase in a rig, in a big truck.”

As far as the timeline thing, well.…

“It doesn’t make any sense, even to me,” he laughs. “Tom Hardy was six weeks old when we shot the first movie!”

I press a little, and Miller explains his grand unification theory of the apocalypse. “It all starts next Wednesday, when all the bad things we see in the news come to pass, and stuff that we never saw coming,” he says.

Miller on shooting in the Namib desert during winter:

Miller on designing his post-apocalyptic world: