With an election looming, party politics are playing into an already divided movement fighting for workers' rights 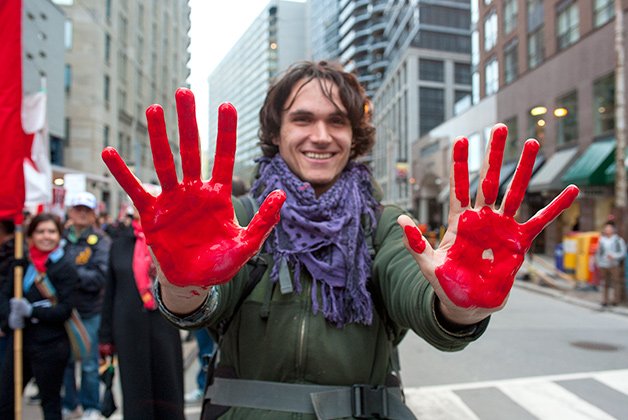 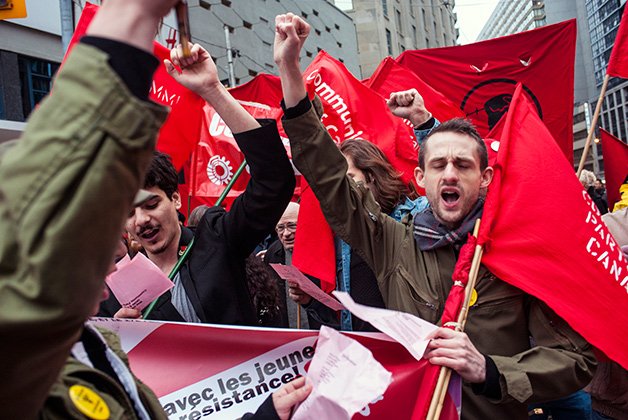 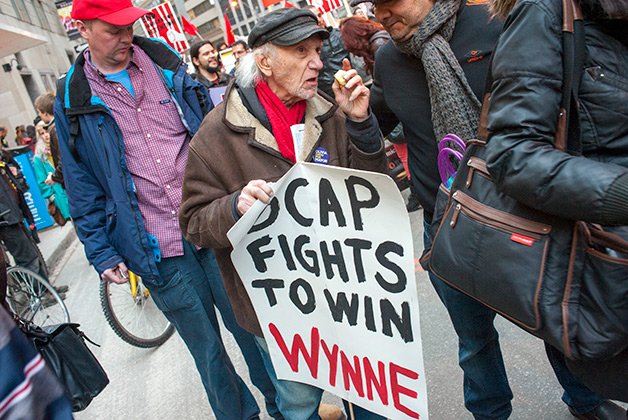 Organized labour endorsed the May Day march this year, but instead of attending, the unions chose to host their own event at Steelworkers Hall on Cecil a couple of days later.

This left the main organizers, the Ontario Coalition Against Poverty (OCAP) and No One Is Illegal (NOII), scrambling to plan a route, recruit marshals and come up with $600 to rent a truck and speaker system and serve food to several hundred people.

They pulled it off and converged on Allan Gardens, then marched to Queen’s Park on the evening of Thursday, May 1. Organized labour was not missed at least we didn’t have to stumble through a singalong of Solidarity Forever.

Earlier in the day, Premier Kathleen Wynne dropped “a budget that prioritizes people.” Thanks to the generosity and compassion of our aspiring “social justice premier,” effective June 1, the minimum wage is going up from $10.25 to $11 an hour. If re-elected, Team Wynne will tie future minimum wage increases to inflation, which would up it one Bluenose to $11.10 by 2016

NDP leader Andrea Horwath said she would not support the minority Liberal budget, triggering a June 12 election. Team Horwath wants to up the minimum wage a loonie to $12 an hour by 2016. Talk about lowered expectations.

Even if it were $14 an hour, has anyone seen the rent for an apartment in Toronto these days?

The high-pressure systems of austerity and an ecologically destructive economy are brewing a solidarity shitstorm of infighting on the left in general – between and within groups.

With cuts to the Special Diet Allowance, Community Start-up and Maintenance Benefit, and social assistance rates 55 per cent below where they should be, according to OCAP, the organization isn’t letting up on what it calls the “Liberals’ war on the poor.

The group recently disrupted the Grits’ $1,500-a-plate Heritage Dinner by unfurling a “Raise the Rates” banner and releasing an epic macaroni shower.

Chanting, “We didn’t cross the borders, the borders crossed us,” the NOII contingent at Thursday’s rally targeted the Harper government’s latest xenophobic move – a moratorium on the inclusion of restaurant workers in the Temporary Foreign Worker Program.

But the Canadian Labour Congress (CLC) and NDP are onside with the HarperCons on this one. An NDP press release calling for a moratorium on the entire program says, “The bottom line is, there are people living here in Canada who are being laid off or having their hours cut to facilitate the use of foreign workers – this needs to end immediately.”

There are many difficult conversations that need to happen within and without the labour movement.

Megan Kinch, a new mom, apprenticing electrician and part-time assistant editor of Briarpatch Magazine, was at the rally and says change won’t happen “until we as unionists honestly face up to the problems of Canada’s labour movement.”

Kinch openly criticizes unions for “commonly accepted practices that screw over young workers,” listing each of the following examples with a bang of her pencil on her reporter’s notepad: two-tiered contracts for new hires taking union dues off the paycheques of minimum-wage employees fighting hard for severance packages but not to keep jobs in Canada.

Meanwhile, video from Vancouver’s three May Day marches shows police among the crowd pushing and shoving anarchists and violently arresting at least a couple of activists

In Montreal, police made five arrests and kettled (corralled) some 136 anti-capitalist demonstrators, fining them $638 each for violating P-6, a municipal bylaw that makes it illegal to march without submitting a planned itinerary – essentially ending the right to protest.

Back on College Street, as the marshals quietly herd us past Toronto Police Headquarters, the parade is oh so polite.