Multi-faceted musician plays outside the box on Escapology 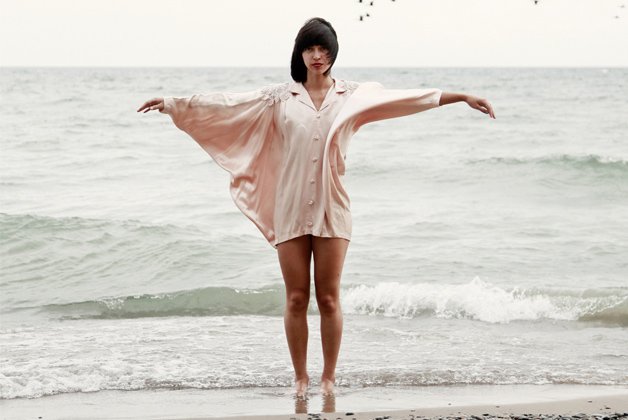 It’s pouring rain and Saving Gigi is cramped, so Maylee Todd suggests the empty, unfussy Eggsmart diner across the street.

“I don’t want these people to be like ‘Oh my god, why is she talking about herself?'” says Todd as we walk over.

A singer/songwriter who isn’t afraid to show skin or wear animal costumes onstage, Todd is bare-faced today and in unusual daywear: an army green parka over a furry robe, mismatched glyphs dangling from her ears.

Musically she’s known as a restless creative (she’s one-half of dance pop duo Ark Analog, and performs bedroom beats as Maloo) who moves easily between goofy and gripping and can channel a peal reminiscent of the young Michael Jackson.

“A lot of people have listened to the new record [Escapology] and think, ‘It’s kind of all over the place,’ but that’s kind of my deal,” says Todd, laughing.

This manic energy shows up in the video for Escapology’s first single, Baby’s Got It. In the first 30 seconds, she’s seen wearing a ghost costume, glitter-face, a kufi, a slinky diva dress, a plain white T and eventually, her underwear.

“With Maylee Todd stuff I get to wild out and go crazy. It’s a different side of me,” she says.

Songs on this second full-length have been around since 2010. She started writing, taking time to work and save money for recording, and then saving up again to refine.

“That’s interesting in terms of songwriting, because I gain a different perspective on the songs,” she says. “So maybe I was really into percussion for this one month, but then I’ll go back and rein it in or switch it up.”

Todd is a harpist with an affinity for unconventional instruments like the handheld Tenori-on, and she wrote Escapology in a way that makes up for her lack of technical ability.

“I don’t have the technique to write creatively – I usually play in the box – so this time around I just sang out, and all these key changes and time signature changes appeared. Then I went back to the piano and guitar and wrote to that. It was freeing.”