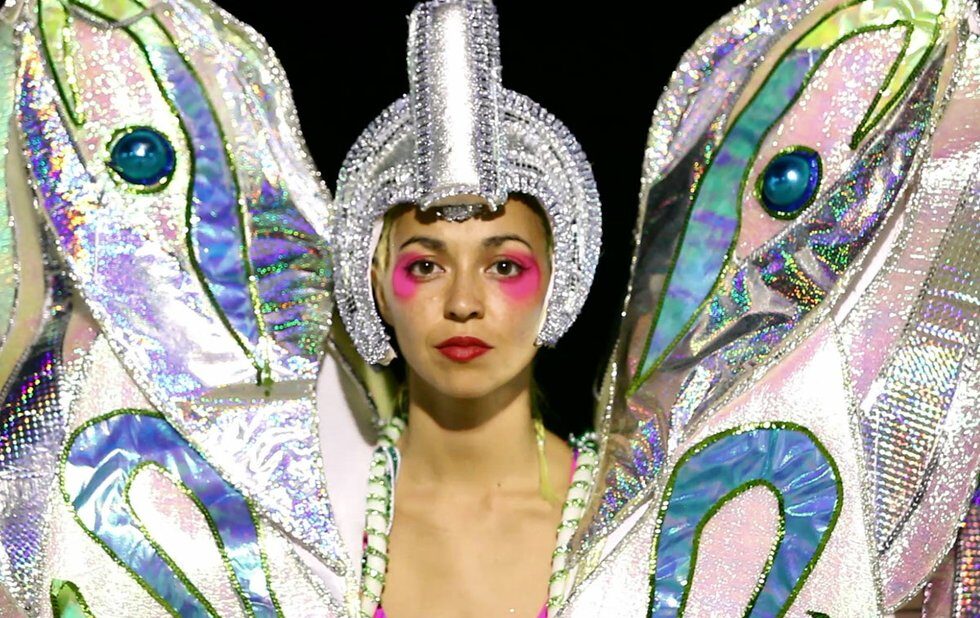 Maylee Todd‘s Inamorata, a new SummerWorks collaboration with La-Nai Gabriel, rearranges songs from her concept album, Acts Of Love, which hasn’t even come out yet.

“It’s kind of unfair on my end,” laughs Todd, “but it’s working out this way!”

It seems strange that audiences will hear the rearranged versions before they hear the originals, but Todd is interested in how the production will inform the songs themselves.

Inamorata is her second production for SummerWorks, following 2013’s Maylee Todd’s Musical Planetarium, which invited attendees to bring their own blankets and sprawl out on the Great Hall’s floor as she performed in front of live projections courtesy of filmmaker Tess Girard.

This time, rather than pairing Todd with a collaborator, the programmers at SummerWorks let her choose her own, and composer/arranger Gabriel was the obvious choice.

Todd describes her as a “talented genius” who makes “really tasteful, intuitive choices,” something she first learned when Gabriel arranged the string and horn parts on Todd’s 2013 album, Escapology.

Unlike the energetic funk and soulful jazz Todd made her name with on Choose Your Own Adventure and Escapology, the songs she’s released recently, like Lonely, are more stripped-down and synth-based. Gabriel’s re-arrangements will push them toward a lusher orchestral sound, with woodwinds, strings and horns assuming the roles of Todd’s synth parts.

“Inamorata” means “a woman one is in love with,” a concept that informs the entire show, from the 3D projections Todd is making to the musical content and collaborators, including the all-female band who bring these “acts of love” to life. (It features Abigail Neale on alto sax/flute, Karen Ng on tenor sax/clarinet, Maya Chilton on violin/vocals and Erika Nielsen on cello.)

Though the SummerWorks stint wasn’t a planned part of the development of Acts Of Love, Todd isn’t afraid to let the process, and this collaboration, inform the record’s outcome.

“La-Nai doesn’t know this, but I was also selfishly wanting to give [the record] to someone in order to hear what they’d come up with, and then maybe that becomes the record,” she says. “Who knows?”

The live performance will be recorded and released digitally, and she currently has enough recorded material for an EP and full-length, with the former arriving later this year and the latter sometime in 2017.

Exposing an unfinished album to a collaborator and building an entire show around it is the kind of daring risk Todd has been taking more and more often. Ever since she picked up a harp or a tenori-on, the narrative around her has been about how her curiosity informs her songwriting.

And while that curiosity still drives her to learn the ins and outs of recording software Ableton and 3D projection, the genesis of Acts Of Love stands apart from the rest of her work for its unflinching vulnerability, both conceptually and creatively.

It’s an approach Todd says is integral to her art.

“At the end of the day, it’s me alone, and I have to care for myself, take risks and be okay to put myself out there,” she says. “I have nothing to lose. It’ll only get me further along in the direction I need to go.”