One of his allies calls the proposal "ludicrous" 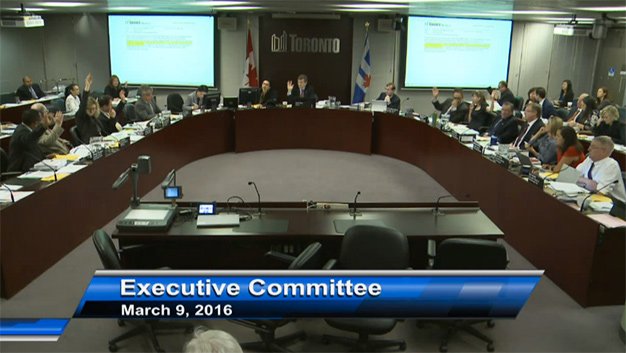 Before a business representative can lobby anyone at City Hall, they first have to sign up with the Lobbyist Registry. They must adhere to a strict code of conduct for lobbying activity and only engage in prescribed forms of contact. Within three days of meeting or communicating with an elected official or city staff, they must register their activity in a publicly searchable database. Failure to comply with these rules can lead to penalties, including fines of up to $100,000.

This framework emerged from the Bellamy Inquiry, which investigated the dark period following amalgamation when influence peddling was rampant at City Hall and envelopes of cash were, quite literally, exchanged for business contracts in the parking garage. By regulating and exposing legitimate lobbying activity, the registry lets members of the public track the financial interests that exert influence behind the scenes.

Now Mayor John Tory wants that same public to be subject to the registry as well.

“His position is that there are groups that have vested interests in the outcome of council decisions that are not confined to direct financial benefit,” spokesperson Siri Agrell writes in an email to NOW explaining why the mayor thinks those groups should have to register as lobbyists. “This is about transparency, and our belief that the public should have visibility into the various groups that lobby city councillors on matters of public record.”

Tory supports a motion by Deputy Mayor Denzil Minnan-Wong that asks city staff to prepare a report reviewing the registration requirements for not-for-profit organizations and unions. The mayor voted in favour of it at the March meeting of his Executive Committee and, according to Agrell, intends to back it this week when it comes before the full Council.

Such a change to the lobbying bylaw would reorient the system from one that tracks parties with financial stakes in an issue to one that places controls on political advocacy of all kinds.

“The whole thing is just ludicrous, and I was actually surprised at the vote at Executive Committee,” says Councillor Paul Ainslie, one of the two committee members to oppose the  motion. (The other was Ana Bailão.)

He points out that when it came up, he took the opportunity to sarcastically shout across the room that they may as well make constituents register, too.

The Ward 43 (Scarborough East) councillor, who also chairs the Government Management Committee, thinks the motion’s supporters didn’t appreciate its implications and will likely be flummoxed when approached by incredulous non-profits. “And [my colleagues will] be like, ‘Oh, we’ve gotta fix this.’ Well, you know what, councillor, you voted for it. Did you not know what you were voting for, councillor?”

“Businesses that stand to benefit financially from decisions, they have money to put in to pay for lobbyists,” says Councillor Mike Layton. “They have that resource. We shouldn’t expect that residents groups have the expertise or the resources to register and to ensure that the registry is maintained up to date. …. We should be encouraging more people to participate in the process.”

Rather than setting out all of the activities that require registration, the city’s current lobbying bylaw [pdf] defines its scope broadly, then gives pages of exceptions in which it doesn’t apply. The categories can get a bit convoluted, but the general guideline is the question of financial incentive. So for example, representatives of not-for-profit organizations don’t usually have to register as lobbyists — but they do if they’re agitating for a grant outside of a formal application process. (And even that exception to the exception has its own exceptions, but you get the idea.)

Since the beginning of the registry, some of Council’s more conservative members have tried to extend its reach to take in non-profits and unions. When council embarked on crafting the rules at the end of its 2003–06 term, Norm Kelly moved that unions, non-governmental organizations, and “non-ward specific associations” be classified as lobbyists. The motion was referred to staff for further consideration, but when they reported back a few months later [pdf], they dismissed the proposal with a single sentence: “Any communication by any person can constitute lobbying, but it is inappropriate to require every person to register.” Undeterred, Kelly tried again when the matter returned to Mayor David Miller’s Executive Committee, but his motion to include unions got shot down.

Seven years later, as deputy mayor with enhanced powers in the latter part of the Rob Ford era, Kelly drafted yet another motion asking for a report on making non-profits, unions, “all grass roots campaigns,” and “all community organizations designed to target specific City-wide issues resulting in financial impacts” subject to the registry. Well-organized citizen coalitions such as NoJetsTO and No Casino Toronto had been extraordinarily effective in countering the professional lobbying efforts of deep-pocketed industries, and some councillors felt the groups had an unfair advantage.

But just before Council was to vote on the motion, Kelly asked to withdraw it, stating only that “there is a time to act and a time to listen.” He’d been getting public blowback and wanted to be seen as responsive to concerns.

“The irony here,” Gord Perks told NOW at the time, “is that the very public tools that they were objecting to managed to organize to defeat their motion.”

As Bill Sinclair, executive director of St. Stephen’s Community House, wrote: “There is a big and clear difference between advocating for a more equitable, caring, just, and inclusive society, and lobbying for private corporate financial interests.” [pdf]

“If we’re to put up barriers to accessing the decision-making process,” says Layton, “it certainly shouldn’t be for the not-for-profit groups and residents groups that are only trying to make their city a better place.”