Amid the dross and skeletal remains of The Guvernment nightclub complex on Queens Quay East, Toronto Mayor John Tory and. 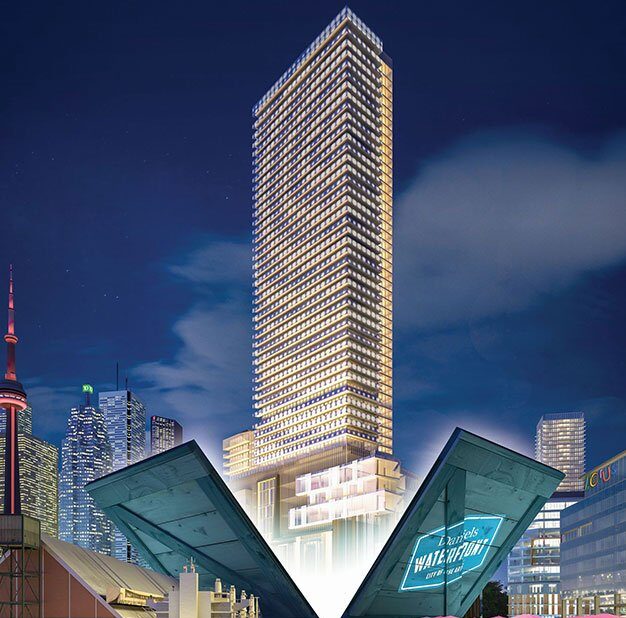 Renderings from The Daniels Corporation|Happy birthday

Amid the dross and skeletal remains of The Guvernment nightclub complex on Queens Quay East, Toronto Mayor John Tory and Waterfront Toronto President and CEO John Campbell broke ground Thursday on a $700 million development project with arts and culture at its core.

On 1.32 million square feet, the Daniels Waterfront: City of the Arts development aims to revitalize the Queens Quay Waterfront area by creating a multi-purpose, arts-focused centre where people can live, work and play.

Im very proud of a city that produces a property like this, Tory said during the unveiling in front of hundreds of industry professionals.

Its going to do things that are positive for the city, he said.

The City of the Arts is set to have two residential towers with 900 condo units as well as two commercial office-space towers. George Brown College and OCAD University are also collaborating with the developer to create a post-secondary academic space that will cater to the design arts and digital media sectors.

Master of ceremonies Tom Dutton, senior vice president of Daniels Corp., remarked that the project is an incredible combination of a whole bunch of different uses that are going to add up to be greater than the sum of its parts.

At the heart of this project is its Creative Industries Hub, which will house arts and culture non-profit organizations such as Artscape Toronto, Manifesto, Remix and others.

Dwayne Dixon, executive director of Manifesto, an organization that promotes Toronto hip-hop culture and which will move into the hub once it opens, said urban music in the city will now have found its home after decades of searching.

There was a super need for it, Dixon said. To have something right downtown by the lake with the mayor here and Daniels Crop. is huge, and I think it speaks volumes to what art and artists have done for this city, he said.

This development also signifies the private sectors enthusiasm for Waterfront Toronto’s revitalization endeavour as it is the first in the East Bayfront area to be built on private land and one of the first wholly private-sector developments in the neighbourhood.

This is now a totally private-sector initiated project, so that shows I think a lot confidence in whats going to happen on the Waterfront, said Waterfront Toronto President and CEO John Campbell.

With Daniels Corp. about to start construction in May, Campbell believes more private developers will start digging in the area in due time.

Once completed, The City of Arts will give the Waterfront an atmosphere similar to that of Sydney, Australia, Campbell said.