NOW MagazineCultureTheatreMe Talking to Myself in the Future

Me Talking to Myself in the Future

ME TALKING TO MYSELF IN THE FUTURE by Marie Brassard (Infrarouge/Buddies in Bad Times, 12 Alexander). Runs to April 6.. 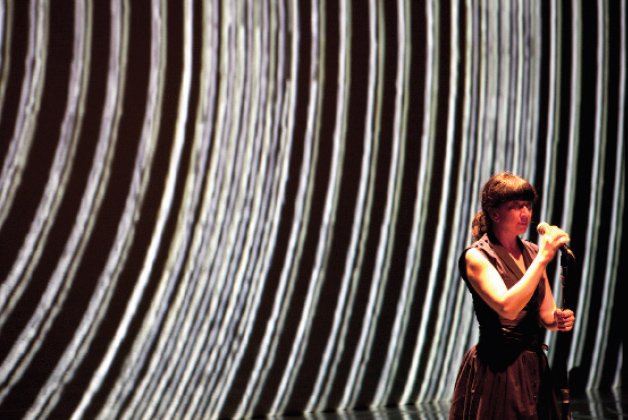 Marie Brassard mesmerizes in Me Talking To Myself In The Future.

Past and present, waking life and dream world intersect in Me Talking To Myself In The Future, another scintillating, surreal offering from Quebecois master Marie Brassard.

As in her signature show, Jimmy, Brassard – a mischievous glint in her eye – again takes on multiple characters, her voice manipulated electronically to become a girl wandering through the forest, a woman on her deathbed or a demonic figure called Morpheus.

The set-up and structure of the new show, however, is less satisfying than in Jimmy, and even at an hour the dense, poetic language can be difficult to wade through.

But Brassard, flanked by musician and sound designers Jonathan Parant and Alexandre St-Onge, is mesmerizing to watch, as is Mikko Hynninen’s video design projected onto a big screen in the back, which adds layers to the non-linear narrative.

There’s little emotional payoff at the end. It’s a shame that Brassard and the sound designers don’t let us hear a piece by Gustav Mahler that gets mentioned in the monologue.

But look for some haunting imagery and a few solid chuckles, as when Brassard delivers her very own creation myth, complete with dancing fishes and a menagerie of frisky animals.