Did RCMP push feds to farm out medical weed production? 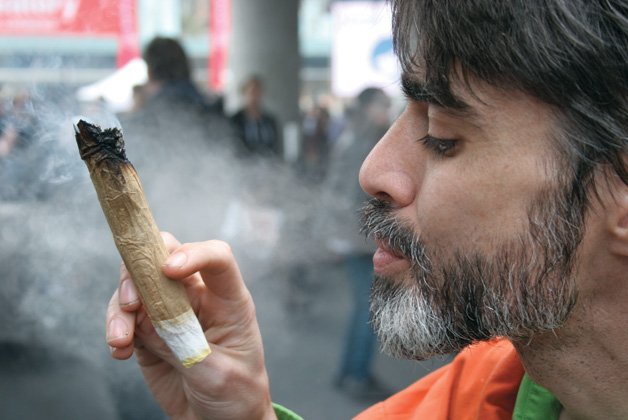 But if new Health Canada regulations due out this month look anything like their working versions, medicinal dope may soon become even harder to score – particularly for the sick without hefty bank accounts.

Until now, medical users – of whom there are 26,222 in Canada – could get a licence to grow their own or could designate a grower, who’d also be licensed, to produce marijuana for them.

Under Health Canada’s proposed “improvements,” however, both licences would disappear, and production would instead be farmed out to government-certified contractors. “Licensed producers will be responsible for setting their own prices,” the agency’s website ominously notes.

“A couple of companies can make big profits, but all the sick people will have to pay huge amounts of money,” says Paul Lewin, a lawyer in an ongoing court case that seeks to make medical marijuana more accessible.

For those who grow themselves, being forced to buy pot would significantly add to the cost of keeping pain at bay, which currently runs them between pennies and dollars a day. Most have little hope that the designated companies would make an effort to keep prices down.

“Marijuana is the perfect pain medicine right now,” says Lewin. “Opioids are destroying our population and are also expensive. With marijuana, patients don’t need money from anyone. It’s not costing anyone anything.”

According to pot activist Matt Mernagh, who won a 2011 Superior Court of Justice ruling that found the medical marijuana regime broken, most in the med pot community are on some form of government disability. “Is the Ontario government prepared to buy medical marijuana for people?” he asks.

While it’s not clear exactly what’s motivating Health Canada to tighten up the growing system, it’s likely the department was influenced by a 2010 RCMP report prepared for the Canadian Association of Chiefs of Police. It concluded that the medical marijuana program had created a new avenue for drug traffickers, with little oversight of grow ops by Health Canada.

Minister of Health Leona Aglukkaq has said in the past that the department has no enforcement capacity and that personal growing would be eliminated as a consequence.

But it’s not just the cost factor that worries the med pot constituency. Users are also concerned about quality if their medicine is contracted out, since many have specific strains of the plant that work for them. Some variants work for chemo patients needing to increase appetite and fight nausea, others for pain relief from chronic conditions, others for depression, insomnia or anxiety.

Mernagh, who has multiple afflictions including fibromyalgia, depression and scoliosis, says it’s unlikely government-approved growers will bother to produce each individual’s preferred strain.

Mernagh and Lewin point out that the proposed rules also fail to take into account the 2011 Superior Court ruling that found the Medical Marijuana Access Regulations unconstitutional. That decision, currently under appeal by the feds, found that because the MMAR makes doctors gatekeepers to access, and too few agree to sign forms for those entitled, the program is unconstitutional.

If anything, the proposed changes put even more responsibility on doctors, removing the current step where Health Canada must okay a doctor’s recommendation for a patient to join the program. While this would get rid of a level of bureaucracy, it doesn’t address the problem that not all who need the herb can legally get it. And it certainly doesn’t reassure doctors who worry about being on a limb prescribing it.

Canadian Medical Association president Dr. Anna Reid says that if the government is going to propose marijuana as a remedy, it has the responsibility to conduct clinical tests on which medical practitioners can base their decisions.

“We’re being asked to treat medical marijuana as a medication without any information,” she tells NOW. “We’d never be asked to do this for any other medication. Previously, Health Canada was taking that risk.”

A recent CMA study found that 35 per cent of its members say they “never” prescribe pot when asked, and another 25 per cent would “seldom” be willing to do so.

Mernagh earned the right to use marijuana legally through the courts after failing to find a doctor willing to prescribe it for him.

Reid is sympathetic to those who’d rather hit the bong than the pill bottle, and says the apparent conflict between doctors and medical use candidates highlights how little research has been done to help people with chronic pain. “We have traditionally not taken chronic pain seriously,” she says. “We have woefully inadequate treatments.”

Health Canada spokesperson Stephane Shank is quick to note the government is not exactly encouraging patients to smoke dope. “It is important to highlight that marijuana is not approved as a therapeutic drug in Canada. While pointing to some potential benefits, scientific evidence does not establish the safety and efficacy of cannabis to the extent required by the Food and Drug Regulations for marketed drugs in Canada. As such, cannabis remains a controlled substance.”

Marijuana as medicine, he says, “is intended for those patients for whom all other conventional treatments have been tried or considered, or have been found to be ineffective or medically inappropriate.”

A draft version of the new regulations, incorporating Health Canada’s proposals and public feedback, is due out by the end of 2012.

But Mernagh’s mainly got the upcoming Ontario Court of Appeal ruling on his mind. “It’s been seven months since Paul Lewin argued our case. It’s just a waiting game now.”