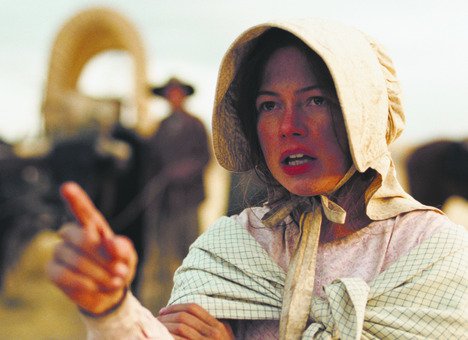 Michelle Williams has a bee in her bonnet in Meeks Cutoff.

Kelly Reichardt’s follow-up to her wrenching Wendy And Lucy is a world removed from that very contemporary film. Set in 1845, Meek’s Cutoff tells the story of a small wagon train lost in the badlands of what appears to be Utah.

As the families (Michelle Williams and Will Patton Shirley Henderson and Neal Huff Zoe Kazan and Paul Dano) follow their blustering but clearly incompetent guide (Bruce Greenwood, who’s marvellous) deeper and deeper into an unknowable quagmire, one could draw parallels to the American adventure in Iraq, but that might be simplistic.

Really, this is a film about process – taking time to cross a river, reload a rifle, put out a fire. When everything you do holds the possibility of prolonging your life (or bringing it to an early end), your relationship to time is very different.

Moody and sharply observed, this is one of the finest American films of the last year, and one that’s going to infuriate as many people as it enthralls. That doesn’t matter, as long as they see it.