Meetings With A Young Poet 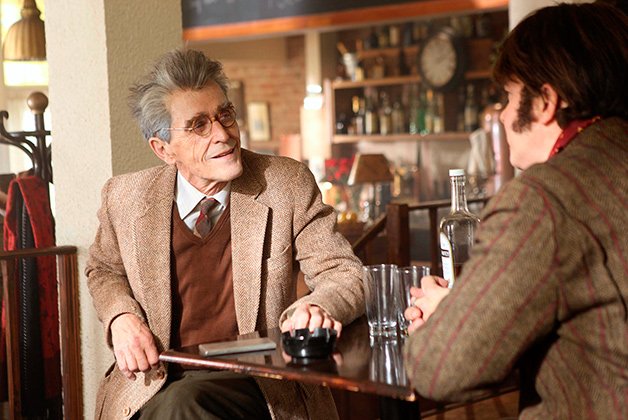 Shifting between 1992, 1968 and sundry points between, Meetings With A Young Poet chronicles a hypothetical friendship between Samuel Beckett (Stephen McHattie) and a fictional Montreal poet named Paul Susser (Vincent Hoss-Desmarais). The great author tutors his admirer in drinking and smoking, but offers paltry artistic encouragement, which perhaps formed the wound that’s prevented Paul from following up on his debut, the ominously titled Dialogues Of Silence.

The 1992 segments depict Paul’s encounters with a seductive actor (Maria de Medeiros) aiming to cast herself against gender in Krapp’s Last Tape. She’s eager to learn Paul’s first-hand impressions of Beckett and curious about Paul’s writer’s block, but he coolly informs her, “My struggle to overcome silence isn’t your concern.”

Director Rudy Barichello seems to believe we’re more interested in Paul and his affected melancholy than we’re given cause to be. Meetings is overwhelmingly populated by quotation-spouting pedants, none more dull, pretentious and opaque than the protagonist, whose oft-trembling chin isn’t enough to generate sympathy.

Yet McHattie’s Beckett is endlessly watchable, the shock of grey nesting atop that wizened face, those flaring eyebrows like an old chair losing its stuffing, the distant gaze, the gravelly voice slipping supplely between French and Irish-hued English.

My favourite scene: Beckett childishly swinging his feet off the back of a wagon loaded with beets as it traverses a cemetery. If only we could luxuriate exclusively in such lovely incidentals.