DaiLos Deep-Fried Watermelon Since debuting in a big way last year on College, Nick Lius teahouse-like spot has seen its. 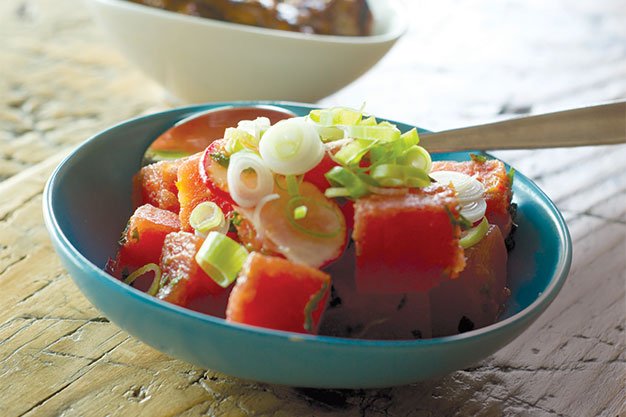 Since debuting in a big way last year on College, Nick Lius teahouse-like spot has seen its most unusual offering watermelon cubes showered with cornmeal and deep-fried become its biggest breakout hit. Curiouser and curiouser: theyre plated with frizzy dehydrated pork floss thats somehow both airy and chewy like beef jerky, with some Thai basil and juicy pickled melon rind to round things out. Deflating pleasingly with each bite, Lius watermelon makes for a totally novel and ultra-addictive eating experience.

The watermelon salad occupies a small spot on a long list of small plates at this Indonesian-inspired midtown snack bar, and would undeniably make for a great palate refresher in a shared smorgasbord of satay, rendang tacos and Javanese beef, but its a perfectly balanced little microcosm all on its own. Surrounding the sweet compressed watermelon cubes, theres a gently salty sambal vinaigrette, bright mint, fresh green onions, razor-sliced radishes for crunch and thin slivers of chili that set your mouth tingling.

Susur Lee caused a minor stir when he put a salad of cubed watermelon and feta on the menu at his namesake restaurant, Lee. Four years on, that combo has become fairly commonplace but Lee is still pushing the fruits boundaries over at Bent. His take on ceviche features pleasingly identical cubes of red tuna and watermelon dressed with onion, lime, crispy fried shallots, fiery rocoto chilies and croutons made from slices of crisped-up Chinese doughnuts (better known as youtiao). If that spicy-sweet roller coaster doesnt sate your melon cravings, the pink stuff also finds its way into a cooling yogurt-dressed salad alongside Lees fried jerk chicken.

At this surf-shack-like Asian-Caribbean fusion kitchen, watermelon plays second banana to the fried chicken, along with maple-sweetened Sriracha and funky soy-marinated daikon. The chickens excellent hot, juicy and golden but of the three condiments, the watermelons the one that steals the show, with the cubed fruit, Thai basil and rice-liquor marinade colluding to create an almost steak-sauce-like savouriness. If youre not into poultry, the same fixins accompany battered, deep-fried cauliflower.

Treating your watermelon to a quick sear on a hot grill not only impresses guests with your culinary ingenuity its also dead easy. So easy, in fact, that after opening Me&Mine (1144 College, at Dufferin, 416-535-5858, meandmine.ca) in 2013, chefs Melissa daSilva and Joel MacMillan sent out grilled watermelon slices as complimentary snacks with each order. Theyve since taken it off the menu but have brought the dish back until July 25 as part of their second-anniversary celebrations.

If youd like to try some DIY grilled melon at home, heres how daSilva does it:

Cut your watermelon into inch-thick slices. Place them on a hot grill or grill pan just long enough to leave grill marks. (You dont want to overcook the melon or itll get too soft, daSilva explains.)

Let it cool off and sprinkle with salt and fresh lime juice and presto! You can serve it right away or keep it in the fridge to add to salads later. Tip: dont be afraid to add your own personalized spin chef Tom Dixon of the Stockyards has been known to slather slices of watermelon with a dry spice rub -before they hit the grill.