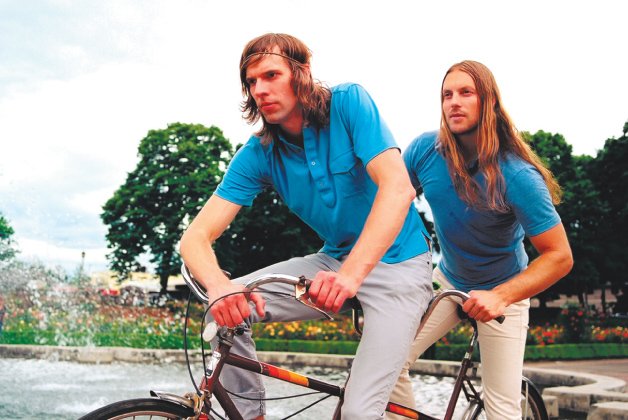 You might assume that when a band goes from being a trio to a duo, it’ll lead to a smaller sound. Yet Menomena’s Justin Harris and Danny Seim – down a member after the departure of multi-instrumentalist Brent Knopf in 2010 – have managed to turn out their most fully charged record to date.

The Portland experimental rockers’ fifth album, Moms (Barsuk), is a dramatic and vibrant explosion of ideas, which the members have never been short on since their inception in 2000.

In order to recreate its riotous but smartly arranged layers of aggressive guitars, thunderous drums, punctuated saxophone and expressive synths – all recorded by Harris and Seim in their home studios (they also split lead vocal and instrumental duties) – they’ve added three members to the touring lineup.

“Touring as a five-piece means it’s not nearly as difficult to juggle everything as when we were just three people,” says Harris over the phone from rural Texas, a week into the tour. “Five people can play most of the layers. Or try to.”

Different this time around is the unflinching directness of both members’ lyrics, which are loosely themed around family, moms specifically, as you might’ve gathered from the album title. Seim’s died when he was a teenager, and Harris’s raised him largely on her own.

And so we get lines like “Heavy are the branches hanging from my fucked-up family tree,” on the Harris-sung tune Heavy Is As Heavy Does. And “I wish I wasn’t forced to rob a grave to pull you near,” on Seim’s gentler Baton.

“[Writing Moms] was one of the first times where we kind of had a concept in mind and more actively talked about it and pursued certain topics, like the roles our families have played in our lives,” Harris explains. “In the past, we’ve kept stuff a little closer to our chests. That said, not every song is necessarily about our moms or families.”

Was it the loss of Knopf that prompted the remaining members to examine, consciously or subconsciously, other losses in their lives?

“Oh, hmm, that’s interesting. I don’t know. It must have been subconscious, if at all. I think it was more that Danny was just thinking about being 17 when his mom died and realizing that he’d lived 17 more years since. Brent left two years ago, so we’ve spent a good deal of time without him already. But, you know, maybe. I’ll have to think about that more.”