The Canadian Association for Equality (CAFE), Canada's highest profile "men's rights" group, has been barred from marching in Toronto's Pride. 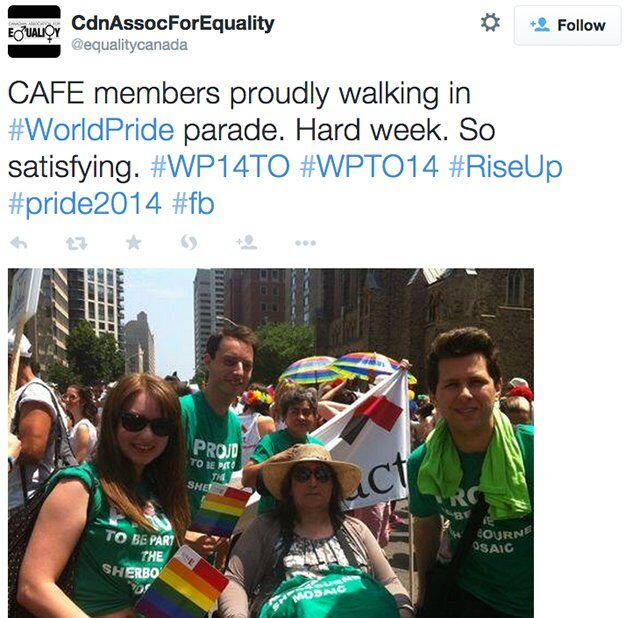 A tweet by CAFE from last year's WorldPride parade.

A tweet by CAFE from last year's WorldPride parade.

The Canadian Association for Equality (CAFE), Canada’s highest profile “men’s rights” group, has been barred from marching in Toronto’s Pride parade once and for all.

Unlike last year, the decision was a formal one rendered through Pride Toronto’s Dispute Resolution Process [pdf], making CAFE the first organization whose application to march to be officially rejected in this way. The quasi-judicial process was originally set up by Pride in 2011 to weigh the participation of the Queers Against Israeli Apartheid in 2012, a panel of arbitrators dismissed complaints against that group.

“This decision, based on a thorough reflection of all views, will prevent CAFE from participating in the 2015 Pride Parade and all future parades and events organized by Pride Toronto,” said Pride Toronto in a statement.

Within the last year or so, CAFE has erected a billboard to make the misleading claim that half of domestic violence victims are men obtained charitable status through an application that falsely suggested the support of legitimate human rights groups that actually want nothing to do with them started a petition to oppose a (non-existent) proposal to ban “manspreading” on the TTC, saying “it sometimes can be physically painful for to close our legs” [sic] and weirdly denied the identity of the group’s leader in an interview with NOW.

In 2014, Pride revoked CAFE’s march permit in a last-minute, seemingly ad hoc decision. But they managed to get into the parade, anyway, somehow piggybacking on the Sherbourne Health Centre’s contingent.