Canadian Association for Equality has permit revoked after public complaints 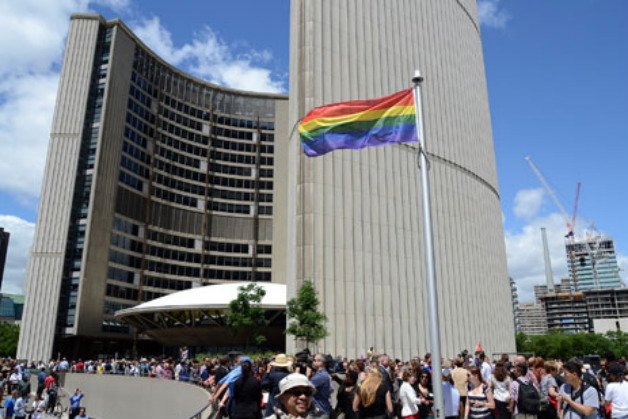 Pride Toronto has booted a controversial men’s rights organization from the annual Pride Parade after receiving complaints about the group.

The Canadian Association for Equality marched in last year’s parade, but said in a web post Thursday its permit for this year’s event has been revoked.

Pride Toronto representatives did not immediately return several requests for comment from NOW, but according to the CAFE post, the organization in charge of WorldPride told the group that its permit had been cancelled because “it has come to our attention that the work of your organization may contravene the mission, vision and values of Pride Toronto and WorldPride.”

The decision comes after an email campaign this week calling for the group’s removal, which was organized by a Toronto woman who describes herself as a “concerned feminist.” In correspondence forwarded to NOW the woman, who asked that her name not be published because she fears retribution from CAFE supporters, told Pride Toronto that CAFE is associated with the men’s rights movement. She accused it of trying to “downplay the serious social, economic and political marginalization that women in this society face every day’ and cited its links to A Voice for Men (AVFM), an U.S. online hub for antifeminist and misogynist views.

“Pride has a mandate of equality,” the woman wrote in the email to Pride organizers dated Wednesday, June 25. “In order to march in the parade one’s group must be non-oppressive, non-discriminatory. CAFE should not be allowed to march.”

Pride Toronto director of operations Jaime Martino wrote back the same day: “Thank you for bringing this to our attention, as it had escaped our notice,” she wrote. “Pride Toronto is committed to providing safe and inclusive spaces for all members of the LGBTTIQQ2SA communities. Given the concerns expressed, Canadian Association for Equality’s parade permit has been cancelled.”

On its website, CAFE said it was “extremely hurt and disappointed” by the decision, especially because it came only days before Sunday’s parade.

CAFE’s removal from the Pride march is only the latest setback for the group. Its attempt to stage an “Equality Day” concert on the Toronto Islands was thwarted last month when critics publicized its ties to the men’s rights movement. Several bands and the proposed venue pulled out. The same woman who complained to Pride about CAFE also helped organize that campaign.

The group reacted to that controversy by insisting that it isn’t a men’s rights or anti-feminist group, but its website devotes considerable space to talking about “men’s rights” issues and countering the movement’s critics.

CAFE’s credibility has also repeatedly been called into question in recent weeks.

On Tuesday, NOW revealed that last year CAFE used the names of prominent feminist and LGBTQ rights organizations’ on its application for charitable status without their consent. In response to the story, members of the public have launched a campaign asking the Canada Revenue Agency to revoke CAFE’s charitable status.

In a strange interview with NOW in May, a spokesperson for the group claimed CAFE had no ties to AVFM, even though it was promoting a conference staged by the U.S. group at the time.

Pride Toronto’s decision to ban CAFE could revive debate about how the LGBTQ organization deals with controversial groups that register to march. In recent years some councillors repeatedly threatened to pull city funding from the Pride festival if Queers Against Israeli Apartheid were allowed to take part, but Pride organizers argued they had no grounds on which to unilaterally bar the Palestine solidarity group. City staff determined QuAIA’s use of the phrase “Israeli apartheid” didn’t violate the city’s anti-discrimination policy.

As a result of the QuAIA controversy, Pride established a dispute resolution process in 2011. The policy says that if anyone objects to a group’s participation in the parade, they must file a written complaint referencing “the particular section in a Pride Toronto by-law, policy, or rule that is alleged to be at issue.” The matter would then be referred to one of Pride’s dispute resolution officers for mediation or arbitration. The cut-off date for complaints this year was June 4.

QuAIA is registered to march in Sunday’s parade.

CAFE did not respond to NOW’s request for an interview for this story.