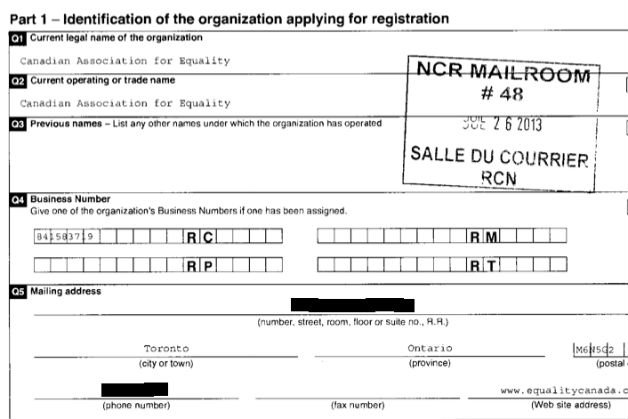 These aren’t the type of organizations that you would expect to be involved with a controversial “men’s rights” group that has been accused of being anti-feminist and has links to an online U.S. misogynist movement.

Yet when the Canadian Association for Equality (CAFE), a self-described “men’s issues” organization, applied to the Canada Revenue Agency for charitable status last year, it listed the Women’s Legal Education and Action Fund (LEAF), Egale Canada, and Status of Women Canada as potential participants in its “regular panel discussion series” on women’s and men’s issues. The CRA granted CAFE charitable status in March, 2014.

There’s just one problem: none of the groups listed has ever been involved with CAFE.

The executive directors of Egale and LEAF said they had no knowledge of ever being approached by the organization, and said they would not work with CAFE if they were asked. Before NOW contacted them, neither organization had any knowledge that CAFE had listed them on its application.

A spokesperson for Status of Women Canada, the federal agency, told NOW in an email that none of its representatives had ever been involved in a CAFE event.

LEAF’s executive director Diane O’Reggio was shocked to learn CAFE had associated itself with her organization, which has been defending women’s legal rights for almost thirty years.

“We’re concerned that this organization has used our name in this manner,” said O’Reggio. “We absolutely are not associated with this group and what they stand for.”

“We’re obviously a feminist equality organization and we think the beliefs that they espouse are absolutely in contradiction and opposite to the work of what our organization does.”

O’Reggio said it was “very disingenuous” for CAFE to suggest to the CRA it had a working relationship with LEAF, and she’s concerned the men’s group used her organization in order to gain charitable status.

Helen Kennedy, executive director of gay rights group Egale Canada, had a similar reaction. “The CRA needs to be told that Egale is not affiliated or associated with [CAFE] in any way,” she said.

Kennedy speculated that CAFE had used hers and other organizations’ good names in order to paper over its own controversial activities. “They have a problem with their reputation and they want to at least appear to be working with organizations like Egale and like LEAF in order to somehow change that,” she said.

Prominent equality organizations weren’t the only ones listed on CAFE’s application without consent.

The group also claimed it was planning to work with university scholars from women’s studies departments, and specifically named Professor Sarita Srivastava, an associate sociology professor at Queen’s who studies anti-racist challenges to Canadian feminist groups. On its application CAFE said it was “currently” setting up a panel discussion to include Srivastava.

Reached by email, Srivastava told NOW that she was “stunned” to learn her name was on the form, which was date-stamped in a National Capital Region mailroom on July 26, 2013. According to Srivastava, more than four months before that she turned down an invitation from the group to speak about misogyny as part of a panel discussion on “misandry,” the highly disputed term men’s rights activists use to describe systemic anti-male discrimination.

In an email dated March 13 Srivastava told the group she would be out of town when the event was supposed to take place, but also raised concerns about a November 2012 CAFE-sponsored talk at U of T by writer Dr. Warren Farrell, whose work is central to the men’s rights movement. After a brief email exchange, Srivastava says she never heard from the group again.

“I’m certain that the reason for my invitation, and for the inclusion of my name in the application, was to counter criticism that they are anti-feminist and one-sided,” Srivastava told NOW. She feels it was inappropriate for CAFE to use her name but allowed that because she didn’t tell the group she would never work with them, CAFE could conceivably have intended to invite her to a future panel.

Other aspects of CAFE’s application raise more questions about whether the group was upfront about its mandate, which it described as “educat[ing] the public about equality issues in order to foster equality for all Canadians,” with the status of men and boys being “one key area of focus.”

For instance, the group told the CRA it hosts a regular speaker series on “equality issues” and listed three lecturers it sponsored in the first half of 2012. The lecture topics described were relatively benign, and included such uncontroversial issues as debunking myths about prostate cancer.

But CAFE omitted the speaking events for which it is best known in the months preceding its application, CAFE invited both Farrell and Janice Fiamengo, a University of Ottawa professor who is critical of feminism, to speak at U of T. Both events sparked anti-hate speech protests and received media coverage, but CAFE listed neither lecture on its application, even though they had occurred more recently than the uncontroversial speaking events it did cite.

Similarly, CAFE wrote on its application that it intended to host a book club that would include titles like Ceasefire: Why Women and Men Must Join Forces to Achieve True Equality, and The Woman’s Bible. The latter is a canonical feminist work by Elizabeth Cady Stanton and does not appear on the reading list posted to CAFE’s website. But books like Legalizing Misandry and Farrell’s the Myth of Male Power, a canonical text of the men’s right’s movement, are on the reading list. These more controversial titles were left off the CRA application.

NOW emailed a list of questions about this story to several of CAFE’s email accounts and to its founder, Justin Trottier. Trottier isn’t included among the members of CAFE’s leadership on the group’s website, but his signature appears on the CRA application’s supporting documents and he is named in the application as the organization’s chair. Despite repeated attempts, NOW did not receive a response.

It has proven difficult to get Trottier to speak on the record about the group he created. In a strange phone interview with CAFE last month, a man who would only give his name as “Justin” refused to reveal his full identity to NOW and claimed he was merely “working behind the scenes as a volunteer.” He could then be heard feeding answers to CAFE spokesperson Denise Fong, who is Trottier’s fiancée.

During that interview Fong and “Justin” also denied CAFE had any association with a Voice for Men (AVFM), an online U.S. misogyny group, even though the CAFE website was promoting an AVFM conference at the time.

According to CRA spokesperson Philippe Brideau all applications for charitable status are “thoroughly reviewed by CRA officials” and “part of this research involves cross-referencing information given on an organization’s application with information available in the public domain.”

By law, the CRA cannot comment on specific cases, but Brideau said that if the agency receives complaints about a charity it could conduct an audit to ensure the organization is in compliance with the law.

“The registration of a charity can be revoked if the charity made a false statement in circumstances amounting to culpable conduct in providing information to obtain registration,” Brideau wrote in an email.