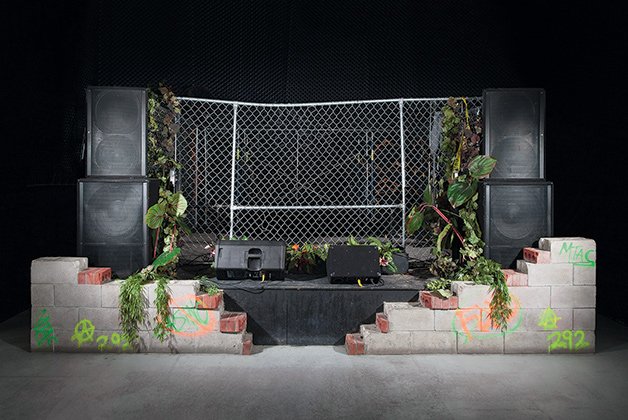 Danika Zandboer recreates a basement stage in We Are Monoliths.

Subculture, fragile incubator of adolescent identity, is the subject of recent OCADU grad Danika Zandboer’s We Are Monoliths, an intriguing triptych of photographs in the vitrines opposite Gallery 44 this month.

Anyone who’s lived through youth music culture most likely remembers both its inclusive and alienating aspects. In these pictures, Zandboer looks at heavy metal, whose broad and varied subsets have fomented as much division as they have unity.

This is why the first portrait, of Zak, a fan, is so evocative. Connoisseurs of Norwegian black metal will be familiar with the way his corpse-painted face clashes completely with his patterned sweater.

Black metalists, the most extreme sub-sect of satanic heavy metal, insist on wearing black at all times. According to some accounts, an unemotional Varg Vikernes (founder of Norwegian band Burzum) claimed he stabbed Mayhem guitarist Euronymous to death because his music was not truly black metal. Euronymous’s crime: he’d worn a Christmas sweater to a family gathering. Is Zandboer’s portrait a disturbing reference to that act?

In Isabelle, a portrait of a young heavy metal woman, Zandboer underscores the genre’s gender imbalance, prompting questions about heavy metal’s preponderance of young white adolescent males. Are there independent, strong women in the scene, or is this another incongruity highlighted by the photographer?

Monument shows a sculptural installation recreating a typical basement stage. Sitting between the two portraits and their simmering contradictions, it serves as a focal point. This is the arena in which subcultural identities are continuously forged and redefined.