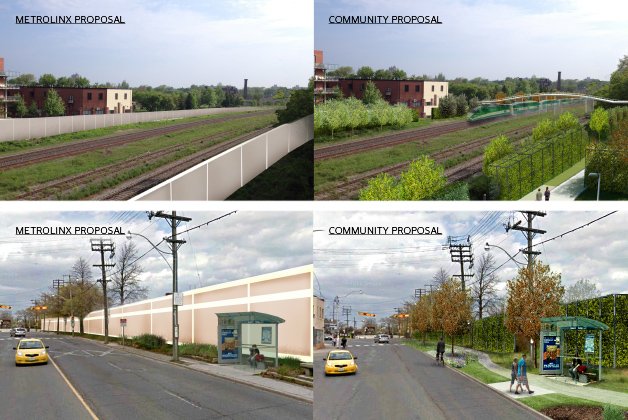 You’d think Metrolinx would be rushing to make amends after foisting polluting diesel trains on neighbourhoods along the Georgetown rail corridor.

But the provincial transit agency is unrepentant.

Once again bucking the wishes of community groups, it’s refusing to budge on its plan to build 16-foot noise-attenuation walls along the tracks on 13 kilometres of the 23-kilometre line, in many cases on both sides. We’re talking barriers taller than the Berlin Wall, just minus the barbed wire. Many streets will be completely dominated by large, likely graffiti-tagged obstructions.

While residents have been pushing for a discussion on alternatives to the massive structures, Metrolinx staff have only allowed the community to weigh in on changes to the colour of the wall and not much else.

The Junction Triangle Rail Committee, after years of pushing for electric trains and more stops along the route for local use, and being ignored, has decided it needs its own retinue of experts and has engaged Brown and Storey Architects, creators of Dundas Square, the Leslie Barns and the Railpath, to design an alternative to the bleak structures.

The committee has joined up with the Wabash Building Society, which is organizing to expand the community centre in Sorauren Park, which fronts the rail corridor. There’s a fear the park’s urban yet natural ambience will be compromised by a large cement wall running hundreds of metres along one side.

As has often been the case, Metrolinx has been more concerned with directives from Queen’s Park than with community input, and has given little indication of willingness to bend. Citing recommendations from the Ministry of the Environment, but couching them as requirements about noise mitigation that require large barriers, Metrolinx has allocated $20 to $25 million to the project.

Enter Brown and Storey. The firm has a plan for no more money that will generate more public space and green the neighbourhood while helping to reduce noise and boost safety: a barrier composed of a wire frame and dense greenery inside the space.

Along with plexiglass screens acceptable to the Ministry of the Environment as noise blocks, these walls would be transparent enough to allow residents to feel connected to those on the other side of the tracks. On top of this, the plan turns areas near the tracks into a linear park as well as a series of parkettes. All this would provide benefits to an area otherwise offered nothing but construction headaches, noise and air pollution.

The alt-plan also calls for the planting of 10,000 trees to replace the thousands cut down as part of track upgrades. That’s about 20 times the 500 trees Metrolinx proposes to plant.

Activists fear the agency will put out tenders for construction as early as next month. The crunch is on. Will Metrolinx finally learn the basic rules of cooperation? 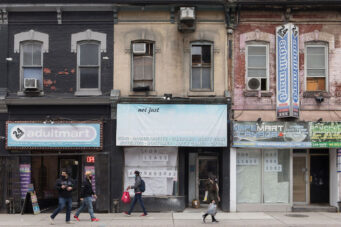 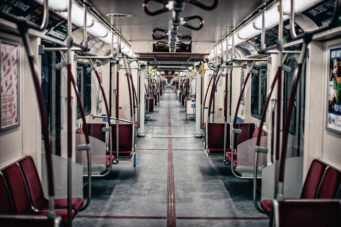