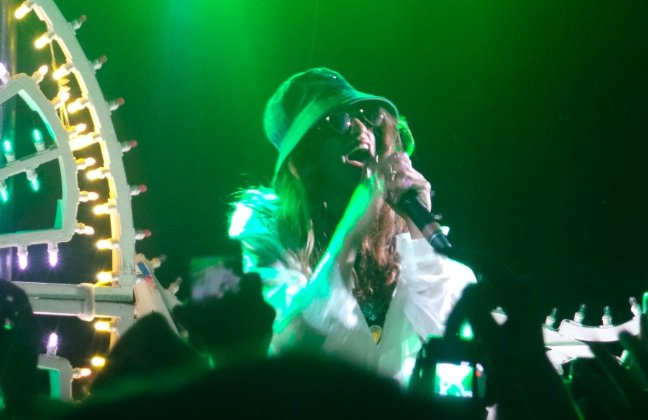 Taking a show that was supposed to be at Yonge-Dundas Square and moving it to a tiny Queen West club? Sure, why not?

That’s what happened on Saturday night, when the British-Sri Lankan rapper M.I.A., who was originally one of Canadian Music Week’s headliners, somehow ended up playing a CMW kickoff party three days before the actual festival began.

We thought it was going to be insane – just two weeks earlier when Questlove was in residence, you could barely move it was so rammed. But the powers that be did a good job of only allowing a civilized number of fans entry: the concert was free, and you could obtain a ticket by lining up or through the CMW Concert Lottery.

In the end, the crowd (as is often the case with a mixed bag of lucky winners and diehards) was a little tame, but M.I.A. rose to the occasion, bringing more of a genuine stage show to Tattoo than the club’s seen in a long time: three normcore-clad backup dancers – two girls and a guy – as well as some very colourful twinkly lights that made a backdrop that resembled a lit-up nighttime festival.

“My first ever show was in Toronto,” she told us, “in a place like this called the Drake Hotel.” That was in 2005, and many of the industry folk at Saturday’s show had been in attendance. Since then, she’s become a genuine superstar with four studio albums and a reputation as an excellent live performer.

In heart-shaped sunglasses, a patterned jumpsuit and a bucket hat, she played songs from throughout her discography, including Hussel from Kala, and Double Bubble Trouble from her latest, Matangi.

Though she chided her soundwoman for sound issues throughout the evening, the audience was mostly unaware of them save for a squeal or two of feedback. Eventually, the emcee weaved through the crowd, and climbed atop the bar to perform her biggest hit, Paper Planes. Moving over to stand on the sound booth, she attempted Bad Girls. When sound issues persisted, she sang the song a cappella, providing the best moment of the night. Not one to give up easily, she sang it again from the stage with full sonic accompaniment.