NOW MagazineNewsMichael Moore and the case for a Hillary Clinton presidency

Michael Moore and the case for a Hillary Clinton presidency 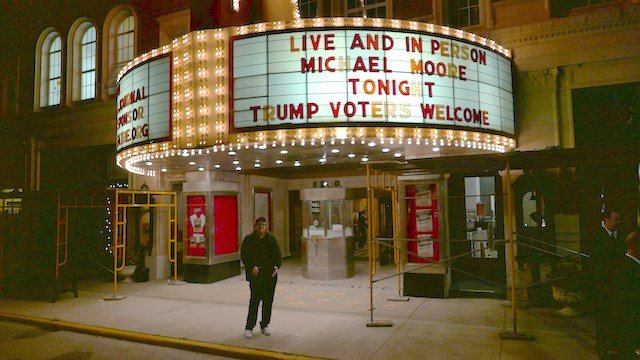 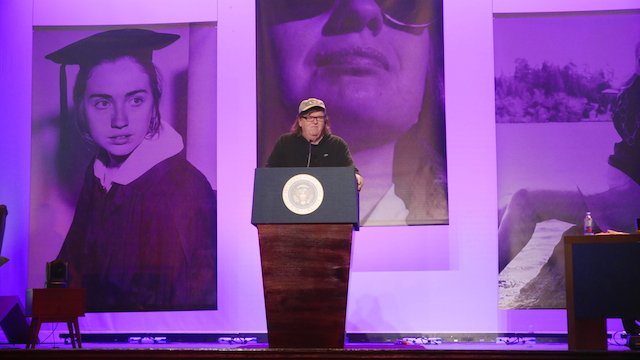 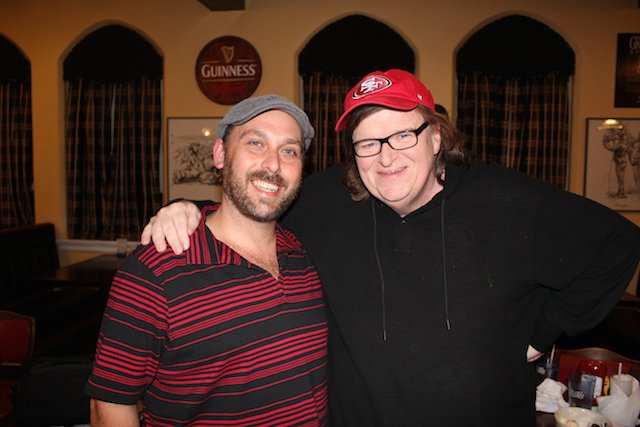 Wilmington, Ohio – The red, white and blue band on the bottom of the TV screen reads “Breaking News: Republicans Back Away From Trump.”

Could this be the end of The Donald’s run for the White House?

Considering the steaming pile of hatred from which he’s built his platform, it’s unlikely the latest controversy swirling around Trump, a vulgar 2005 conversation caught by a hot mic on how to pick-up women – “Grab them by the pussy” – will dissuade supporters of the reality TV star turned presidential hopeful.

The tone set for the night, I down a drink and make my way to the historic Murphy Theatre on West Main Street to sit in on an invitation-only taping of filmmaker Michael Moore’s pre-election special, Michael Moore: Live From Trump and Clinton Land.

“I didn’t think we could ever do worse than Bush [George W.],” says the woman standing in line in front of me. “But this is a whole new level of ignorance that we are seeing with Trump.”

The line behind us stretches all the way around the corner. But despite the huge turnout Moore’s one-man show almost doesn’t take place.

Originally scheduled for the Midland Theatre in Newark, Ohio, Moore says he was forced to move the event at the last minute after being “banned” from appearing at the venue by the theatre’s board of directors.

Attempts to prevent the show from taking place didn’t stop there. Once word got out that Moore was planning to appear in Wilmington, local Republicans tried to stop it. One state Senator threatened to cut off the theatre’s funding if they allowed Moore to take the stage.

Walking out from behind a backdrop of banners bearing black and white images of Hillary Clinton, Moore expressed his appreciation to the board of trustees and the staff at the theatre for standing their ground. Speaking with a local official while filming in town earlier in the week, Moore says he learned that of the 26,000 registered voters in Clinton County, where Wilmington is located, only 500 voted in the Democratic Party primaries.

“This may be Clinton County but it is not Clinton country,” Moore says, only half-jokingly.

He doesn’t wait long to weigh in on Trump’s  “Grab them by the pussy” comment making the headlines that day.

Moore says they were not just harmless “locker room banter,” as Trump has described the comments. Moore says right-wing conservatives have been overtly sexist against Clinton for years. Only in Clinton’s case, her gender has been used to desexualize her and make her appear unattractive.

“It’s a way to dehumanize her,” says Moore.

“It’s a slippery slope because what comes after the gays?” Moore asks. “The transgendered – there will be a transgendered president and we won’t know what bathroom to use at the White House. What’s going to be left after that? PETA [People for the Ethical Treatment of Animals], PETA will take over the White House and animals will have human rights. A fucking gerbil will be running the country. If you’re a Trump voter that’s what you see, that’s your vision for the future.”

That “vision” includes building a wall along the U.S.-Mexico border. To emphasize the ridiculousness of Trump’s policies on immigration and national security, a three-metre-high wall is erected around a section of the theatre reserved for “Mexican and Mexican-looking Americans.”  Similarly, the “Muslim and Muslim-looking” among the audience can’t escape the watchful eye – or satire – of the drone hovering over their designated space.

Although he disagrees with almost everything Trump stands for, Moore says he admires the conviction of Trump’s supporters. What they refuse to acknowledge, says Moore, is that they now live in a mostly liberal country.

Noticing one man drop out of the applause on that last bit, Moore tells him that if he doesn’t like abortion he shouldn’t have one. Another contentious issue that causes ripples in the audience is gay marriage. Moore offers similar advice suggesting to those who don’t like the idea. If they don’t like gay marriage they shouldn’t marry a man because they would hate it and it would probably end in gay divorce which isn’t even legal yet, Moore kidded.

Moore is more optimistic at an after-show get together at the General Denver Tavern across the street.

Having voted for Barack Obama in 2012 and Bernie Sanders in this year’s Democratic primaries, Moore says this will be the first time he’ll be voting for Clinton.

He’s encouraged to see her defend many of Sanders’s positions: a living wage, debt-free college, accessible health care, and protection of the environment. Moore says the greatest lesson Clinton can take from what some call the Bernie Revolution is for her to show people who she truly is and what issues she cares about most.

“She needs to be herself, her real self because I think people would love to see that,” he says.

Inspiring a great deal of Moore’s confidence is the fact that Clinton is part of the generation of women identified as the first feminists of the modern era. Pointing out that 77 per cent of the US population is now composed of women, people of colour or men and women between the ages of 18 and 35, Moore says that, at least on paper, Clinton should win.

Hopeful that he will not have to come back and eat his own words if Clinton is elected and doesn’t come through with her promises, Moore says he believes in his heart that she will make the most of the opportunity of being the first woman president.

I walk back to the hotel to catch a few hours of sleep before hitting the road in the morning.

Taking the back roads I count 11 Trump signs and only one for Clinton along Hwy 72. Decorating buildings and lawns beside Hwy 5 along the south shore of Lake Erie are 28 signs for Trump and five for Clinton.

Trump-friendly homes and businesses are often littered with multiple placards and large homemade signs, while Clinton-friendly lawns tend to have a single small sign.

Not a formal study by any means. But as Moore reminds us, America has a history of electing treacherous political animals.

“When I was a kid, everyone said Richard Nixon wasn’t going to win because he’s ‘tricky Dick,’ and then he won twice. Then along came Regan. He was a ‘B’ actor and his co-star was a chimpanzee. And he was elected twice. Then came ‘W’ [George W. Bush]. What was that about? We didn’t think he would be the President of the United States. He was an idiot, he was a coke-head, and then he didn’t win, Gore [Al Gore] got more votes. Bush lost but he won and then he won again. This has happened before and it happens all of the time.”