Breaking the ice was never so literal as it was Thursday, March 13 when volunteers took their shovels and picks. 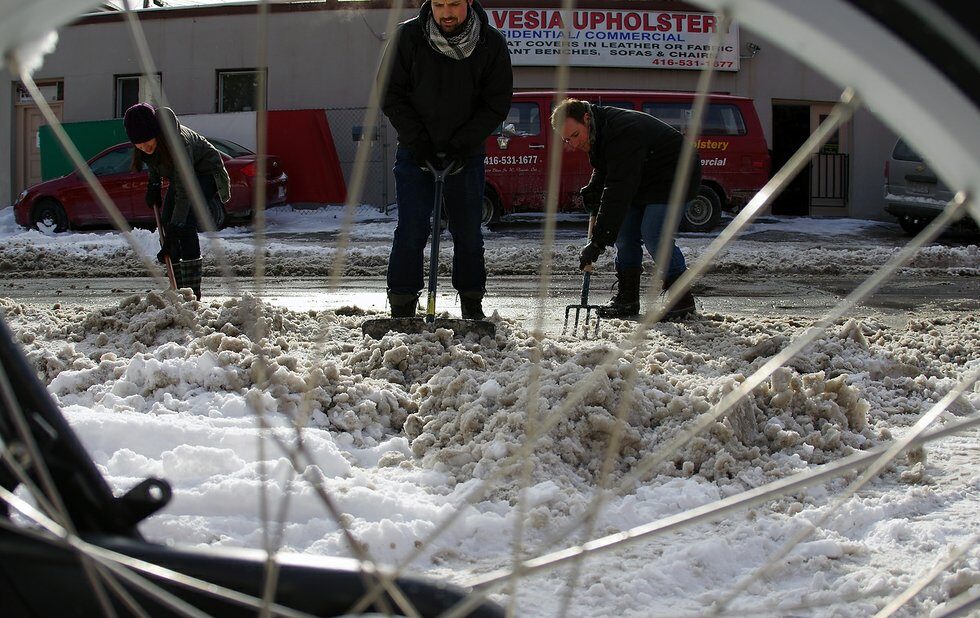 Breaking the ice was never so literal as it was Thursday, March 13 when volunteers took their shovels and picks to Cycle Toronto’s Shovel in on Shaw to clear the snow off the bike lane.

Residents gathered all the snow covering the contraflow lane from on Shaw from Bloor to Harbord over the course of three hours, making the street safer for commuting. Cyclists moved the snow to Christie Pitts using bike trailers packed with pounds of ice and snow.

“Staff hasn’t gotten back to us,” said Layton, but he plans to raise the issue again this spring.

Layton used his own shovel to pitch in. “This is part of my route,” he said, explaining it was a “hard decision” for him to bike to work Thursday “because it’s so dangerous.”

He said snow removal on bike lanes “has been a problem all winter.”

One area resident said this event was an example for public works.

“We’re showing the city how to [remove the snow] so maybe they’ll pick it up next winter,” said Ward 18 resident Liz Sutherland.

“If they’re not clearing the snow, it’s a safety hazard,” she said.

Kolb said he chose Shaw because his organization worked with Layton to create the contraflow lane, approved five years ago and finally painted last year.

Kolb is hopeful the city will create a network of “bike lanes that will have priority [snow] clearing” in winter months.

As a homeowner in Ward 18, Dan Milford-Warren explained riding to work is “impossible with roads like this.”

Approximately, 90 per cent of cyclist return to the TTC or driving in the winter, Kolb says, at least “in part because of safety concerns.”

In a letter to Cycle Toronto, Buckley says: “This year we have asked our forces to pay particular attention to improved clearance of snow in bike lanes. Due to the size of our road system, there will always be locations that – for a host of reasons – do not meet the mark.”

As a result of parking and the amount of snow and extreme cold the conditions this year has been particularly bad for cyclists.