Miley Cyrus at the ACC 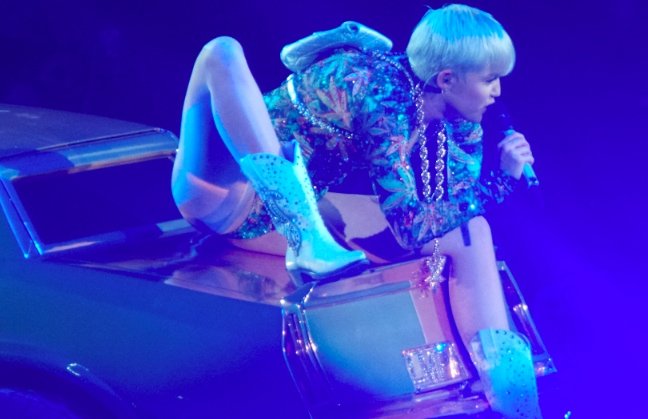 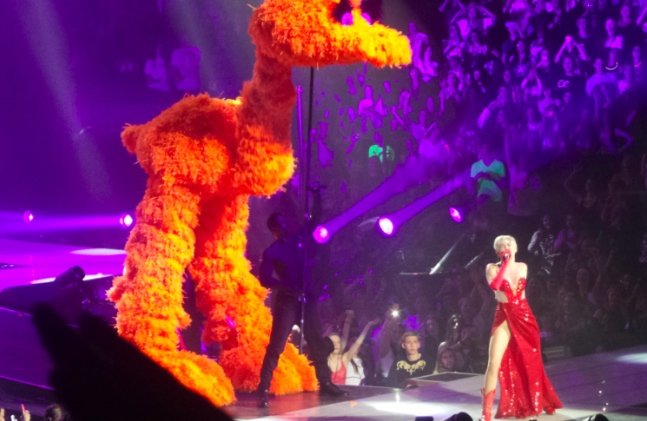 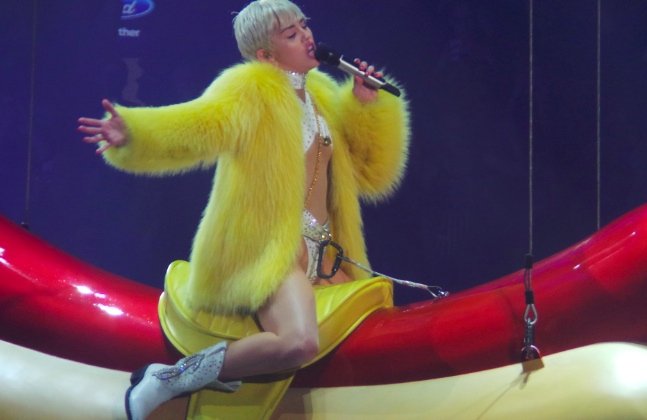 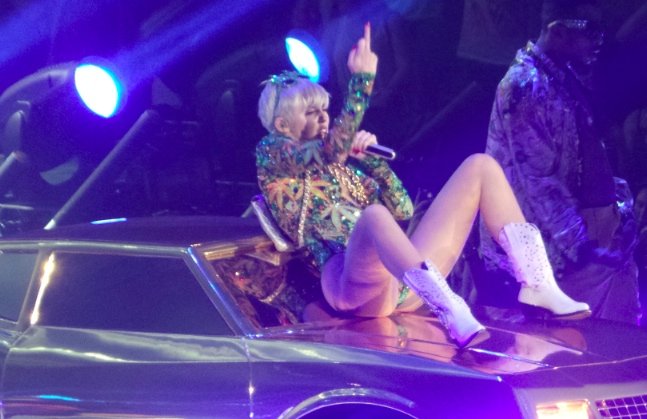 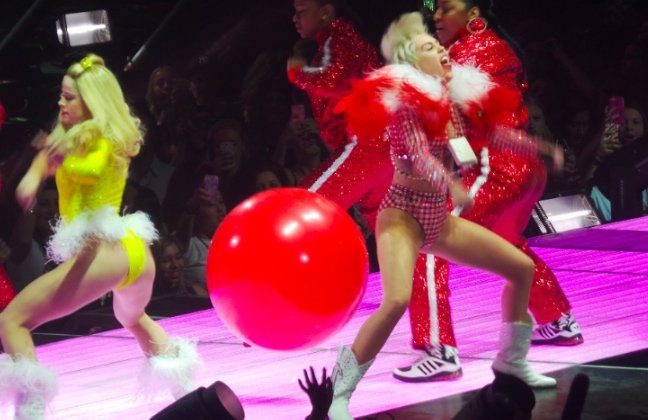 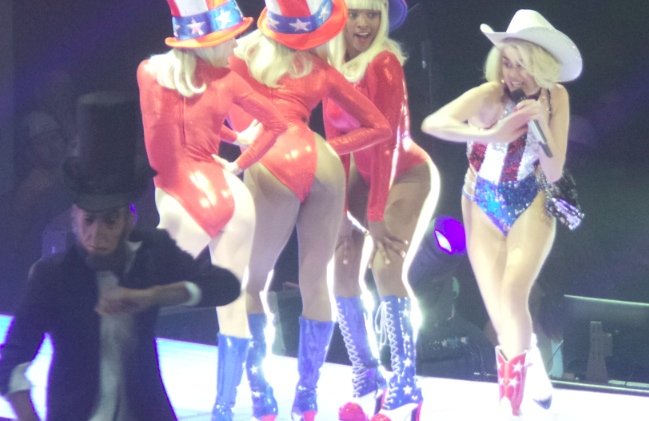 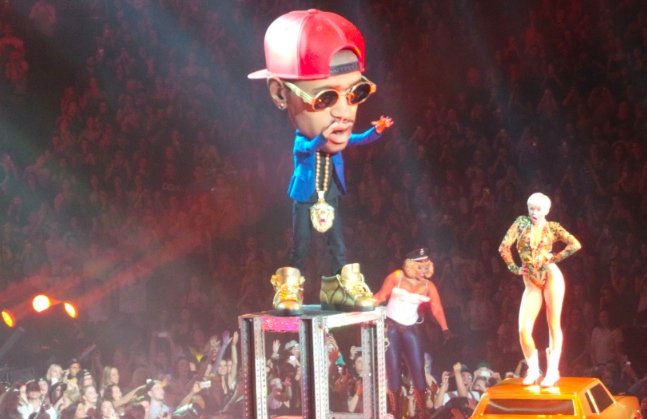 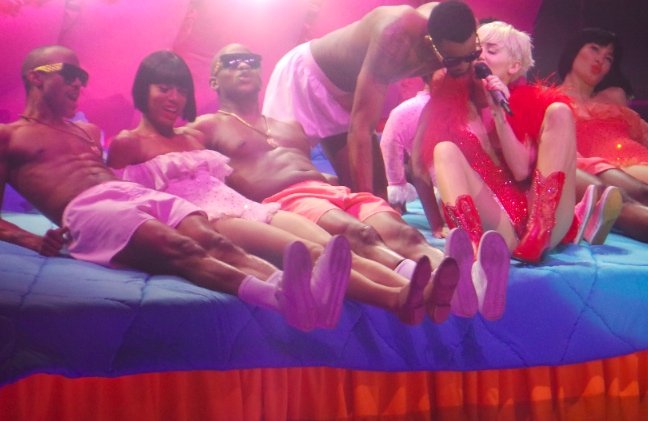 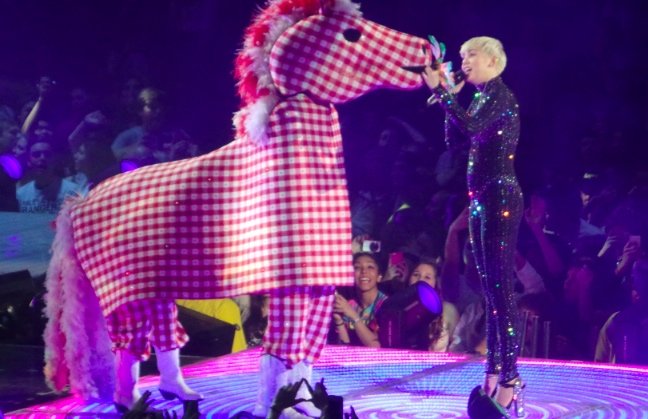 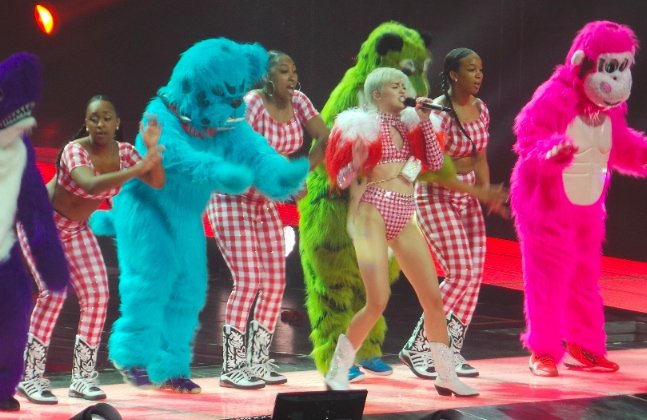 It being the first spring-like day in Toronto, and this being a Miley Cyrus concert, the throngs of young women at the ACC were scantily clad and damn proud of it. Most of the men’s washrooms were converted to women’s, such was the gender ratio. These women (and girls) were not wearing ass-cheek-baring short shorts for no man. They were doing it for themselves, for each other, and mostly, for Miley.

Cyrus came out guns-blazing to her Britney Spears collab SMS (Bangerz), parachuting down a tongue slide that hung out of a giant, projected Miley face. In a red gingham two-piece and cowboy boots, she frolicked with backup dancers of all shapes and sizes (including a little person, who featured prominently throughout the show) as well as furries (purple sharks, green tigers etc). Without breaking to banter, she pressed on to country-hip-hop song 4×4 (“I’m a female rebel, can’t you tell?”), before disappearing underneath the stage. When she re-emerged for Love Money Party, it was in a bejewelled, green, bum-baring body suit and tiny backback, legs-splayed, riding a giant gold car, joined by a gigantic Big Sean bobble head who rapped his parts.

Such was the surrealist whimsy of the Miley Cyrus concert.

“You paid a lot of fucking money to see the show. You better have a good ass time,” Cyrus yelled when she broke to address her screaming fans.

When she wasn’t cavorting around the stage to her catalogue – ass-slapping, twerking, pelvic thrusting and yes, tongue-wagging – she was interacting with the audience: calling us motherfuckers, catching bras from fans, spitting water on those in the first few rows (“either you guys are really thirsty or really slutty”), and encouraging girl-on-girl makeouts. Phew. Cyrus is aggressive and unapologetic. She’s taken the best tricks from the biggest arena-concert players and repurposed them for her own raunchy lane. And if it’s schtick, I don’t think there’s an off-switch. “The sluttier you are, the more likely it is that we would be friends,” she said, before explaining that sluttiness is not something to be ashamed of in Miley’s world. “No one’s gonna get judged.”

She did let her guard down for a few tunes, moving to a stage on the opposite side of the ACC. Sitting down in plaid, sparkly pyjamas, she belted a few slower covers – Bob Dylan’s Lonesome When You Go, Lana Del Rey’s Summertime Sadness, Coldplay’s The Scientist and – saving the best for last – Dolly Parton’s Jolene, which was perfect for her deep, country-strong vocals. All while taking a selfie video with her iPhone.

Cyrus is a fantastic vocalist, and this chilled out interlude only highlighted something special about the entire show: without a lick of backing track she ploughed through two hours of mostly mid-tempo songs. Once or twice, maybe, she held a note a beat or two shorter than ideal. Not bad for a lip-sync-free night.

She returned to the main stage and cranked it back up for Mike WiLL Made It-produced ode-to-Jordans 23, which was fantastic, and On My Own, which dragged a bit.

For a finale, she mounted a giant hot dog like a mechanical bull, and rode it around (Miley’s version of the Beyoncé or Pink harness). “Love is patient, love is kind, love is helpless,” she sang – all whilst straddling an oversized wiener. It doesn’t have to mean anything it’s hilarious.

That said, she encored with two of 2013’s best pop singles, We Can’t Stop and Wrecking Ball. By then, even the 0.2 percent – the adult heterosexual males – were dancing and singing along. You really couldn’t not.

As people were filing out, she burst out with yet another encore – Party In The USA – clad in appropriate cowgirl-powerwoman-Americana get-up, accompanied by dancers dressed up like Mount Rushmore, the Statue of Liberty and Abraham Lincoln, eliciting the loudest, more piercing shrieks.

Miley Cyrus makes hypocrits out of the best of us. We preach female empowerment and sexual freedom, but we’re very particular about what package it comes in. When a 21-year-old gets in our face and shakes her (impossibly perfect) ass, our knee-jerk reaction is that it must be an act. Or someone else’s idea. I’d like to get Sinead O’Connor a ticket to the Bangerz Tour because I’m convinced more than ever that Miley is driving her own gold-rimmed car.