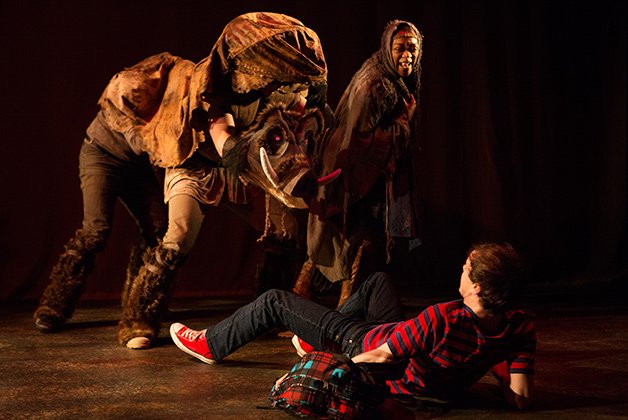 British playwright Kevin Dyer knows that young audiences like adventure stories. In Minotaur, he blends the Greek tale of the battle between the hero Theseus and the half-bull, half-man Minotaur with that of 12-year-old Freddie, who’s tasked with saving his father, a soldier fighting in a modern Middle Eastern war.

When Freddie (Jakob Ehman) receives texts from his cornered father (Jeffrey Wetsch), the mythic, forbidding figures of Pasiphae (Karen Robinson) and her son, Ogre (Cyrus Lane), force him to undertake a quest to save his family. Though Freddie’s mother (Raven Dauda) fears for his safety, she knows he must go.

Dyer’s blend of Greek legend and modern narrative is a potent one, filled with action, the possibility of violence, adventure and some terrifically scary and funny characters, including all 29 nephews of Athenian king Aegeus, who try to topple the ruler from power.

A great deal of plot, perhaps too much, is packed into the show’s 70 minutes with its themes of revenge and forgiveness, Minotaur could easily be expanded into a two-act play. But under director Alan Dilworth, the numerous central characters are well defined and have clear personalities, even if their onstage time is brief.

Ironically, one of the production’s strengths is the way some of the initially villainous characters, notably Pasiphae and the Ogre, become sympathetic as we discover their motivation and history.

Ehman makes a believable Freddie, who discovers that in another life he was the hero Theseus. Armed with that knowledge, he travels into the mythic past and replays his destiny: to physically or mentally best his opponents and ultimately fight the Minotaur (Lane) to free his father. He does it with the help of the prophetic Ariadne Bahareh Yaraghi’s performance, full of quiet power, anchors the production.

Robin Fisher’s costumes combine a touch of the classical and the contemporary with a hint of steampunk, while Jung-Hye Kim’s two-level set suggests Greek columns and an amphitheatre as well as a video war game. Lit by Kimberly Purtell’s evocative lighting, the set becomes dozens of locales. Debashis Sinha’s sound design is often spooky, especially the bellowing of the Minotaur, who’s not seen until late in the play.

The script is being premiered in an unusual fashion, with a trio of different productions by Young People’s Theatre, followed by others at London’s Polka Theatre and Clwyd Theatr Cymru Theatre for Young People in Wales.