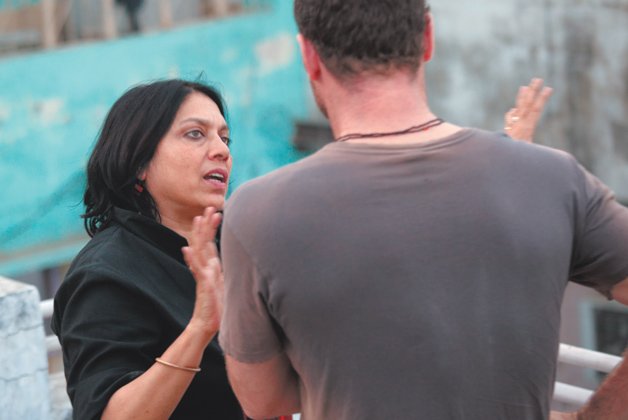 THE RELUCTANT FUNDAMENTALIST directed by Mira Nair, written by Ami Boghani, Mohsin Hamid and William Wheeler from the novel by Hamid, with Riz Ahmed, Kate Hudson and Liev Schreiber. 130 minutes. Some subtitles. Opens Friday (May 17). For venues and times, see listings.

Mira Nair’s new film, The Reluctant Fundamentalist, is absolutely of the moment. It’s about a Pakistani immigrant who embraces everything American – including its most brutal forms of capitalism – only to turn radical in the wake of 9/11.

So you can’t blame me for asking Nair about the Boston bombing. As we sit down in a room at the Trump Hotel, the attack is dominating the headlines, the authorities have killed one suspect, and everyone’s wondering why young, ostensibly well-assimilated new Americans turn to terrorism.

But when I bring the subject up, Nair rolls her eyes. Oops – I’m not the first journalist to make the connection. So we talk about other things – why she was interested in Mohsin Hamid’s book, the challenges of film adaptation.

But the elephant in the room is staring us down, and she eventually talks freely about whether Western audiences are ready for a story about an immigrant whose feelings about the U.S. are more complicated than gratitude.

She’s convinced Americans are open to the movie’s ideas.

“I think they’re ready,” says the warm and articulate Nair. “America has 350 million people, and not all of them believe in war or whatever is handed to them as truth. And this film is as much about America as it is about Pakistan.

“When you give a character a context and a dream of loving America, embracing America and being appreciated in return, the audience enters the character’s world much more deeply – because it is their world. They haven’t seen that perspective of how the world can turn and make a person feel like ‘the other.’ This kind of portrait helps Americans question how that happens.”

Nair has always preferred to take on big stories. Her most popular films – Mississippi Masala, Monsoon Wedding, The Namesake – address tough issues, from racism to sexual abuse. So The Reluctant Fundamentalist is not a stretch.

“I like the adrenalin of not knowing if I can do something and taking that risk,” she says, laughing. “I’m making a Broadway musical of Monsoon Wedding now. I’ve been a stage actor, but never a director.

“I have a friend who says that every time I want to do something, it’s like I’m walking into a stadium and saying, ‘Hit me again.'”

She agrees, though, that Western audiences have opened up to India. It wasn’t like that when her film Salaam Bombay! was nominated for a best-foreign-language Oscar in 1988.

“When the award was being given out and the nominees were named, Candice Bergen and Jacqueline Bisset were stuttering over our names, and my co-writer, Sooni Taraporevala, whispered to me, ‘Oh, India, it’s still too far,’ and it was. It wasn’t in the zeitgeist.

“That’s changed in 25 years, not only by movies but by economics and the power in all of that.”

On what made her politically aware:

Why she wanted to set a film in Pakistan:

Why she resisted a screenwriter’s suggestion that she change the title: